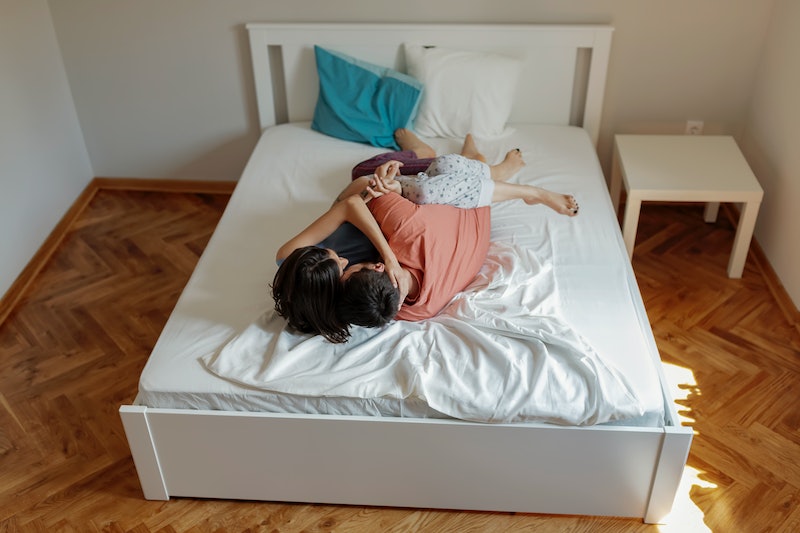 We’re always hearing that we could be having better sex, a better orgasm, or a better relationship. But how often do we hear the nitty-gritty of how we can actually better understand our deepest desires and most embarrassing questions? Bustle has enlisted Vanessa Marin, a sex therapist, to help us out with the details. No gender, sexual orientation, or question is off limits, and all questions remain anonymous. Now, onto today's topic: how to help a guy last longer during sex.

Q: “I’ve been dating this guy for about two months, and now we’re in a relationship. We’ve just started having sex. It’s pretty good. Not great, but I know we’re still finding our rhythm with each other. The main thing that’s bothering me is that he doesn’t last very long. Maybe three or four minutes, tops. My last boyfriend was able to control himself much better, sometimes going for 20 or even 30 minutes. I miss having sex for that long. I want my current boyfriend to last longer, but I don’t know how to bring it up without embarrassing him (or myself).”

A: First of all, kudos for you to recognizing that the two of you need some time to get used to each other! It’s very possible that your partner will start lasting longer once they've gotten over some of those “sleeping with a new person for the first time” jitters (more on this below).

"Usually, when someone’s not lasting a long time it has to do with them being so nervous and distracted by the things that are in their mind that they can't really be present in the moment," sex therapist and educator Lisa Hochberger, LMSW, M.ED, tells Bustle. She says that the pressure that comes with a new relationship — thinking, for example, that they won't like you if you don't 'last' — "innately puts a ton of pressure" on a sexual encounter.

Nonetheless, there are still plenty of things you can do to help sex last longer. Here are nine tips.

As I just mentioned, there is a very real possibility that this issue will resolve itself with a bit of time. Having sex with a new partner is almost always nerve-wracking. We have a lot of stereotypes about people with penises being sex fiends, but they can get just as anxious about sex as people with vulvas can. Being nervous can lead someone to orgasming quickly, or having a hard time getting or staying hard.

If you and your new mate have only slept together a few times, have a bit of patience. These initial jitters typically go away within a few weeks.

Everybody has different preferences for how they have sex, and not everyone will share the same cup of tea — and that includes how much time they like to go at it for. It's worth noting that one 2008 study of sex therapists found that three to seven minutes constituted an "adequate" amount of time in the sack, in their professional opinion; seven to 13 minutes was considered "desirable."

If you come away from that convo knowing you both want to prolong your sessions, then proceed to the tips below, but be aware that an hour or more of play might not be your partner's endgame.

If you’re in a brand-new relationship with your partner, be compassionate when bringing up the idea of lasting longer in bed. This can be a big source of anxiety for people, especially in a new relationship: imagine how you would want them to talk about any sexual difficulties you have.

Once you’ve established trust in your relationship, it’s easier to be more up-front with each other about what you each need in bed. I’d suggest saying something like, “I love having sex with you. I never want it to end. Quickies are fun sometimes, but do you think we can try going for longer other times?” If your partner says they don't know how to last longer, or is worried there are other issues at play, I’d suggest seeking out a doctor or a sex therapist. (Might I humbly point you in the direction of my program, The Modern Man’s Guide To Conquering Performance Pressure?)

Now let’s transition into some actual techniques for extending sex in the moment. Many heterosexual couples spend a few minutes on foreplay, then move on to intercourse until completion. I dislike the word “foreplay” because it implies that these activities must come before intercourse, like an appetizer (can someone come up for a replacement? “Interplay”? Or maybe just “play”?).

5. ... And Encourage Your Mate To Mix Up Their Strokes, Too

A lot of penetrative partners tend to default to hard, fast, and deep thrusts during intercourse, which is a sure-fire way to orgasm quickly. It’s better to mix up your strokes. Aim for a couple of fast strokes, followed up a couple of long, slow, shallow ones. If you're on the bottom, grab their hips and say, “I want you to go really slow for a minute. As slowly as you can possibly go.” Or try, “I want to feel your whole penis moving in and out of me. Pull out as far as you can go.” Or, you can show them what you mean by getting into a position where you’re in charge, like on top.

You can also suggest specific positions that can help your partner slow down and focus on longer, shallower thrusts. Some sex positions make it easier to last longer, including ones where they can’t get very deep, or ones where you’re in control. Here are some of the positions I suggest:

Click through for full descriptions of each, plus some exciting variations to try.

If your partner is getting too close to orgasm, take a break and let themselves calm down. One really hot way to take these breaks is to play the adult version of red light, green light. Tell your bedfriend beforehand that you want to play a game. Whenever one of you says “red light,” both partners have to stop what they’re doing and stay perfectly still until the same person calls out, “green light.” If you can sense them starting to get close, say “red light.” This game can make taking a break feel like a really sexy, taunting tease.

In my sex therapy practice, I work with a lot of people with penises who want to last longer. One of my favorite tips to give them when they need a break is to pull out and use the head of their penis to rub against their partner’s clitoris or perineum. This is a great trick for so many reasons. It allows the penetrative partner to take a break and bring their arousal levels back down. But rather than just sitting there feeling awkward, you’re still doing something very erotic. Not only that, but it also gives the receiving partner some much-needed and much-appreciated stimulation. Is there any better example of a win-win situation?

This article was originally published on Sep. 6, 2016