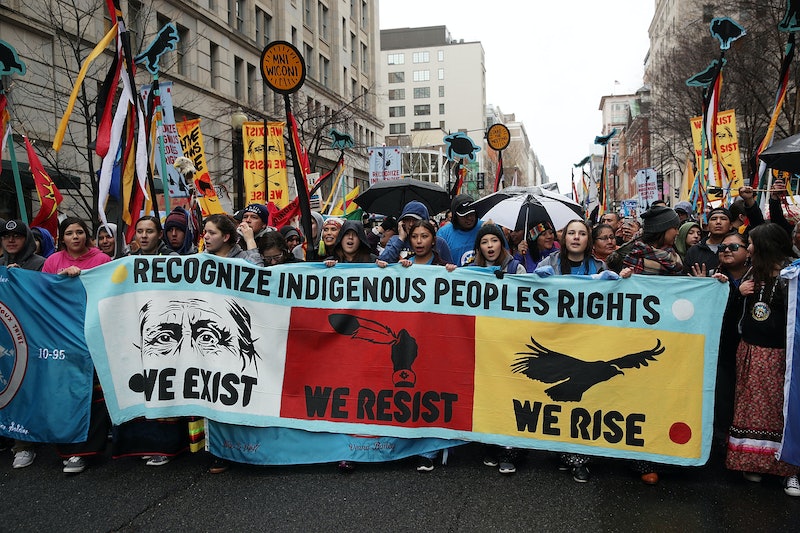 On Monday, Oct. 9, schools and offices across the United States will be closed for what is sometimes called Columbus Day. Increasingly, communities across the country have moved to replace the holiday with Indigenous Peoples Day to honor those who suffered the most as a result of Christopher Columbus' coming to America, but some people remain staunch advocates for the holiday, or at least indifferent to calls for its repeal. So what do you say to someone who doesn't think celebrating Columbus Day is a big deal? Ideally, just knowing about the history of this continent would be enough, but here are some others just in case.

First, a look at the history. Columbus Day is not a longstanding tradition. President Franklin D. Roosevelt, under pressure from the Catholic fraternal organization the Knights of Columbus, officially named October 12th Columbus Day in 1934. What had been largely a celebration of Italian-American became a federal holiday, and instead of learning about the atrocities he committed, students began to learn a cutesy rhyme about Columbus sailing the ocean blue.

But no matter what we learned in school, to ignore the atrocities Columbus committed is irresponsible. Mallory Sprague, a 25-year-old member of the Ojibwe Nation, tells Bustle she believes that to celebrate Columbus today is an act of willful ignorance.

"To celebrate Columbus Day now? When mistreatment of native people has not only been continuous, but has also actually been in the news for once?" she asks. "I get it when people claim ignorance and think [the victims and the perpetrators] are gone and the history books don't tell the whole story. But I know you saw Standing Rock. I know you see this neocolonialism."

When I describe her response as "incredulous," Sprague corrects me: "I’d say I’m less incredulous and more annoyed. Like, I totally believe it, it's just disappointing. I think being incredulous is sort of a luxury native people aren’t afforded."

The issue is perhaps best summed up by the environmentalist, activist, writer and one-time Vice Presidential candidate Winona LaDuke, who wrote in her 1992 essay, "We Are Still Here: The 500 Years Celebration":

"To "discover" implies that something is lost. Something was lost, and it was Columbus. Unfortunately, he did not discover himself in the process of his lostness. He went on to destroy peoples, land, and ecosystems in his search for material wealth and riches. Columbus was a perpetrator of genocide, responsible for setting in motion the most horrendous holocaust to have occurred in the history of the world. Columbus was a slave trader, a thief, a pirate, and most certainly not a hero. To celebrate Columbus is to congratulate the process and history of the invasion."

So if someone asks why it's a big deal to celebrate Columbus Day, you can go ahead and send them that. Here are some other things to tell people who don't think celebrating Columbus Day is a big deal.