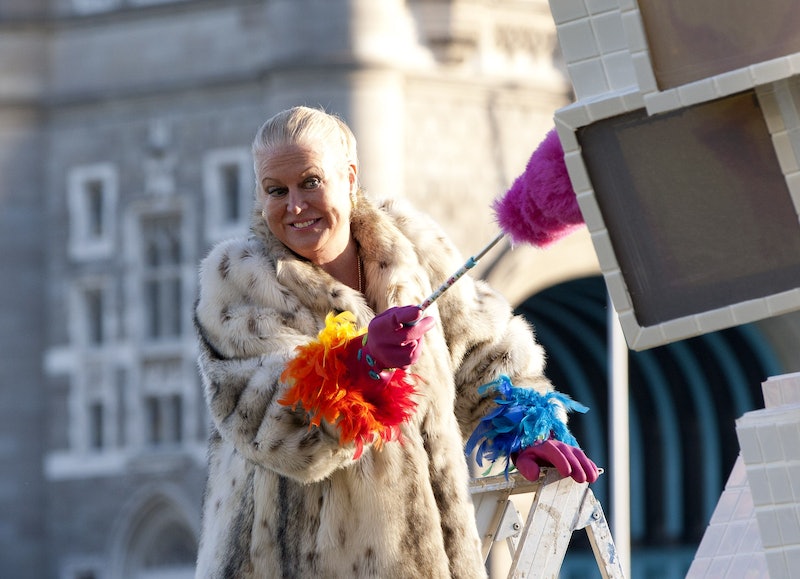 Reality TV is a bit of an icon factory really isn't it? The GC, pretty much anyone from Drag Race (UK or U.S.), and, of course, the force of nature that is Kim Woodburn. So whenever there's news of reality titans getting together, us TV fans positively explode with excitement. Kim Woodburn revealed she's filming with Drag Race UK stars, but the question is, why?

I reached out to the BBC for information on this exciting news, which Woodburn revealed via her Twitter account, and I'll let you know when I hear back from them.

It was yesterday (Nov. 13) that Woodburn posted a video of her in a taxi on her Twitter account, announcing she was on the way to film with Vivienne and Baga Chipz from the first season of RuPaul's Drag Race UK.

Kicking the clip off with her famous "hello my loves" greeting, she went on to talk about the meet up, claiming that the filming their doing together was going out on American TV and Australian TV. And she finishes up by saying "Do you know something? I'd love to do the RuPaul show."

You heard it from the horse's mouth. She's the Queen of Clean and she's keen. Which is no surprise as Woodburn has fast become the grand dame of Reality TV, starring in all the greats including Celebrity Big Brother and I'm A Celebrity Get Me Out Of Here.

She might not have actually appeared herself on the show, but her essence was definitely emulated beyond compare by the Vivienne herself on a couple episodes of RuPaul's Drag Race UK. During week one's photo challenge, the drag queen extraordinaire said she wanted to try impersonating the "cleaner off the telly" and boy, did she impress.

Then, during a very cheeky challenge that focused on guessing the Brit team's underwear choice, the Vivienne wowed once again with a pitch perfect Woodburn. It wasn't too difficult for RuPaul to cojole her into doing the impression and I tell you my loves — there was nothing chicken livered about it.

RuPaul UK has proven to be an out and out hit and is now (sadly for fans) getting closer and closer to its finale, which will take place on Nov. 21. However, as Bustle has previously reported, the UK finale will not be a live event like it is in the U.S. Which begs the question: is Woodburn featuring in the finale? And could her Tweet possibly hint at the outcome of tonight's (Nov. 14) episode — AKA that Vivienne and Baga Chipz make it through as the finale two? Eek. Who knows. I guess you'll have to wait until the finale on Nov 21 to find out.

More like this
Twitter Has Renamed Ekin-Su After *That* 'Dancing On Ice' Performance
By Sophie McEvoy
This Pre-'Love Island' Video Of Olivia & Zara Together Changes Everything
By Bustle UK
Twitter Can’t Make Up Its Mind About Ekin-Su’s 'Dancing On Ice' Skate-Off
By Sophie McEvoy
Spencer Matthews’ Impressive Net Worth Expands Far Beyond Chelsea
By Sam Ramsden
Get The Very Best Of Bustle/UK
Sign up for Bustle UK's twice-weekly newsletter, featuring the latest must-watch TV, moving personal stories, and expert advice on the hottest viral buys.