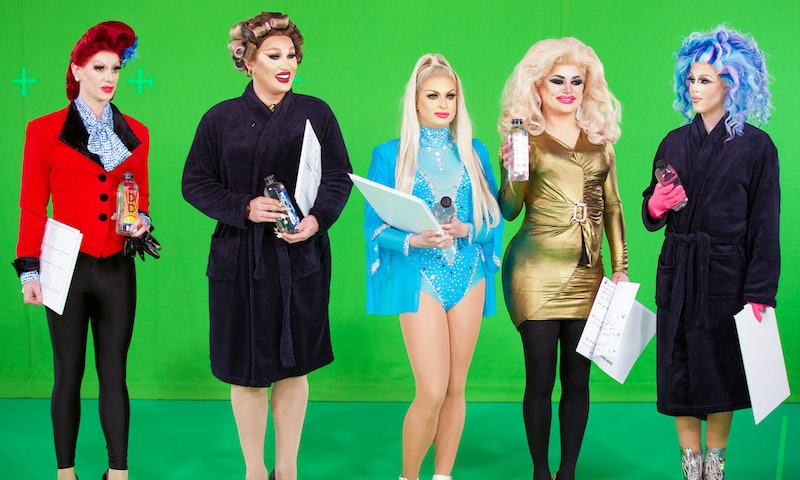 When it was announced that RuPaul's Drag Race was making its way across the Atlantic, die-hard stans began to panic. Would it live up to its U.S. original? Would the British jokes land? And what on earth is a RuPeter badge? Luckily, the series has been a resounding success, and I'm sure many will be sad to see it go. But the question is, when is the RuPaul's Drag Race UK finale?

The BBC has revealed that the show's finale will be on Nov. 21, 2019. That's only a couple of weeks away, guys, and I'm worried how fans will cope. The show's been an absolute hit, to say the least, with viewing parties happening up and down the country and Twitter being set ablaze every Thursday night.

Its no shock the show has been so well received considering not only the contestants, but the panel of judges are so bloody brilliant. Alongside various guests, the panel is made up of Michelle Visage, iconic chat show host Graham Norton, and the indomitable comedian Alan Carr. Hosted by, guess who, RuPaul, the show was in the works for quite some time and has made a select few lucky British-based drag queens actual household names.

The show's success has led the BBC to renew it for another season. Speaking about season two, RuPaul told the BBC:

"I want to thank the BBC and all our fans for their overwhelming support of RuPaul's Drag Race UK. This season's queens proved that Britain's Got Charisma, Uniqueness, Nerve, and Talent — and I want to see more!"

The show's guest judges have also been pretty bang on, with huge names such as Jade Thirlwall, Michaela Coe, and Maisie Williams all signing up to take part. However, one guest judge's demeanour on the show grabbed fans' attention more than others. The one and only Ginger Spice, Geri Horner, seemed a lot different than her former outrageous self. So much so that the Metro reports fellow judge Carr said: "This is a woman who, at the Brits, came out of an inflatable vagina singing Bag It Up! And she was grabbing her pearls! I was shocked."

More like this
Every Season Of 'Love Island' Ranked Best To Worst
By Alice Broster, Frances Stewart and Sophie McEvoy
Joey Essex Is Rumoured To Be Dating A 'Love Island' Favourite
By Sam Ramsden
Molly-Mae & Tommy Fury Revealed Their Baby Girl's "Really Unusual" Name
By Sophie McEvoy and Sam Ramsden
Barney Walsh Has Been Linked With This Famous Miss World Winner
By Sophie McEvoy
Get The Very Best Of Bustle/UK
Sign up for Bustle UK's twice-weekly newsletter, featuring the latest must-watch TV, moving personal stories, and expert advice on the hottest viral buys.