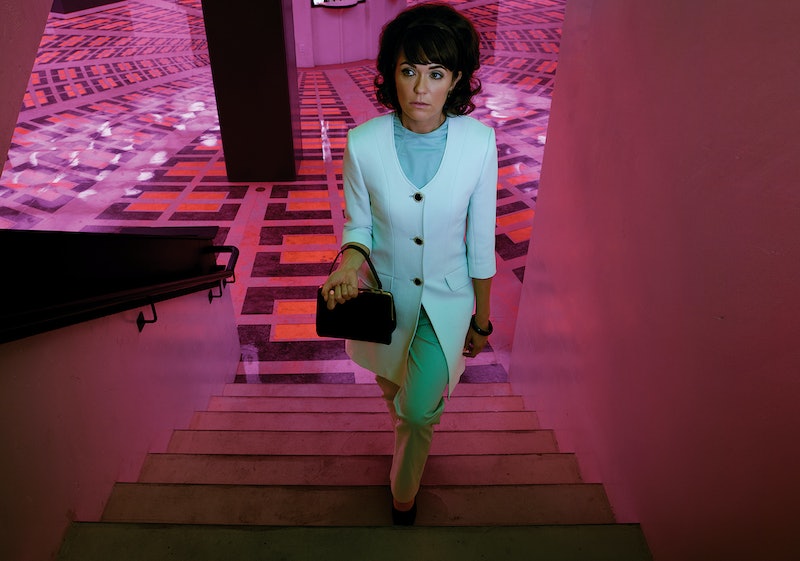 FX's Legion is filled with fascinating characters imbued with fascinating powers, like David's telekinesis, Syd's body-swapping, and Ptonomy's memory exploration. And then there's poor Amy Haller. What will happen to David's sister on Legion? Played by The League's Katie Aselton, she's one of the show's few "normal" human characters — and so of course she has also found herself in extreme danger, captured by the sinister agents of Division 3 and at the mercy of The Eye, who is attempting to divine the location of her super-powered brother with the help of some creepy crawly leeches.

Usually, when a show is based on some literary source material — in this case a Marvel comics series — and you find yourself worried about the fate of a character, you can simply go to the source to find out whether they'll be OK or not. But unfortunately, this is impossible when it comes to Amy Haller, since she's an original creation by showrunner Noah Hawley (Fargo). In fact, in the Marvel comics, David Haller doesn't have any siblings at all… and, depending on your point of view, that could be very bad news for Amy since it makes her rather disposable. (If David never had a sister in the source material, then the show's larger narrative arc would probably be minimally affected by her death.)

In fact, it's the murder of a close family member that first triggers the full capabilities of David's powers in the Marvel comic books. While living in Paris where his mother, Gabrielle Haller, served as the Israeli ambassador, his home was attacked by terrorists who killed his stepfather, psychiatrist Daniel Shomron, in front of David. This caused David to send out a psychic blast that incinerated the brains of the terrorists and absorbed their consciousnesses into his own fractured mind. In the comics, this happened while David was still a very young boy, not the young adult he is on the show. But it's still possible that Legion will adapt this storyline, killing David's sister instead of his stepfather, in order to unleash a terrifying spectacle in the season finale.

Even though this would be a relatively faithful adaptation of David's comic book arc, it would still be unfortunate to see a female character killed off solely for the development of a male character — a trope so prevalent it has its own name: "fridging." (Ironically enough, the term itself also originated in comic books, when Green Lantern's girlfriend was murdered and her corpse was literally stuffed into a refrigerator for the hero to find later.)

For her part, Aselton seems hopeful that her character has a large part to play in the future of the show. In an interview with The Wrap, the actress said about Amy that, "As far as my character's concerned, what we've seen thus far is, I have now become a pawn for Division 3. That's like the government, the bad guys. But then there's like an ultimate evil — worse than bad guys," she teased. "So you'll meet that ultimate evil and see what that guy's up to.” (Could she be referring to the Devil With The Yellow Eyes?) "“So I'm being used as a pawn. David wants to save me," Aselton continued. "That doesn't mean that that's going to fix everything." Is it just me, or does that last sentence imply that Amy does get saved, and yet David's problems persist regardless? Maybe I'm reading too much into it, but it would be nice to see Amy survive the season.

When we last saw her in "Chapter Three," The Eye was starting to reveal the truth about David's abilities to his sister, but Amy still seemed resistant to the idea that her brother is basically a superhero. But in an interview with Access Hollywood, Aselton revealed that her character will eventually learn the whole truth about David. "It just sort of rains down on her at this point in her life," she said on the red carpet of the Legion premiere. "Clearly, there's no denying it, that it is so much bigger."

In analyzing the psychology of Amy Haller, The Observer suggested that her own emotional development was stunted by a childhood spent growing up with a mentally ill sibling — or at least a sibling perceived as having a mental illness. "The result, though, is not just that Amy loses much of her childhood to playing grown up, but that her grown-up life ends up being formed by her childish vision of it," the analysis claims. "This may be why she seems so out of step with the world, why she seems so old-fashioned. She had to learn to be an adult when she was still a child, which meant growing into a child's fantasy of adulthood. Which is not necessarily a worse (or better) option, but, like all options, comes with the cost of every other option not pursued. Who knows who she would have been if she had time to choose carefully?"

Hopefully Amy Haller lives long enough for us to find out who she ultimately becomes.