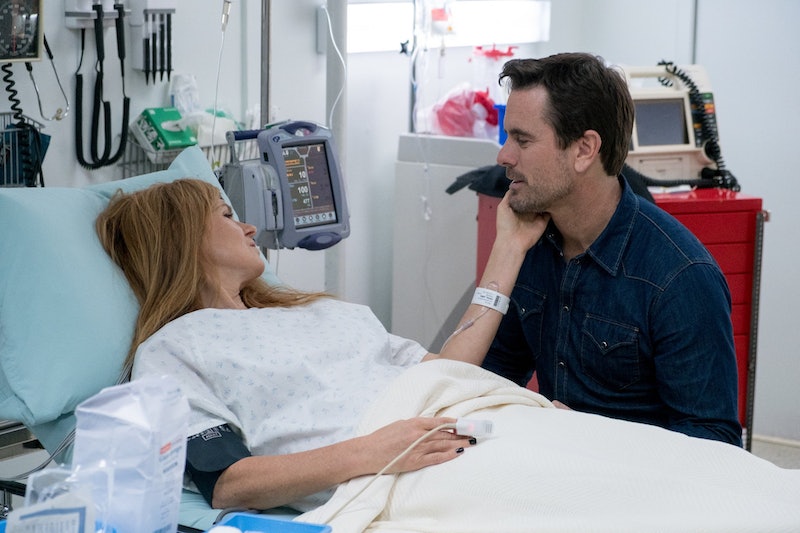 Spoilers for the Feb. 23 episode of Nashville ahead. OK, take a deep breath my fellow Nashville fans. I know we're all still confused and hurting right now over the fact that our dearest Ranya died on Nashville, but there are some things we definitely need to talk about. And first and foremost, the main follow-up question that I have is, now that Rayna is gone, what will happen to Deacon on Nashville? Because Deyna was my heart, you guys. And that heart has been utterly smashed to pieces like an acoustic guitar at the end of a fraught country rock show. Even worse, Rayna's death could have massive implications on Deacon that go far beyond heartbreak.

Because sure, there's the devastating possibility that Deacon could slip back to his old drinking habits as a way to cope with Rayna's death (despite surviving a liver transplant at the start of Season 4), and that's a huge deal. But with Rayna dead, there's also a certain matter of custody to deal with when it comes to Maddie and Daphne.

Maddie, you'll remember, is the biological daughter of Deacon, while Teddy is legally her father. Daphne, however, is much younger and also happens to be the biological daughter of Teddy. However, we've seen Deacon step up and become a good dad to Daphne, something that Rayna even reassured her daughter about before she passed away. So, at this point, it seems like a fierce custody battle could be in the cards.

So, what exactly does that mean for Deacon? Well, like many of the wonderful characters in Nashville, he's fought his fair share of inner demons. And alcohol was by far the biggest and most vicious of those demons. In fact, it was his drinking which drove a wedge between himself and Rayna to begin with.

The notion that Deacon may have to deal with a potential custody battle, while also mourning the loss of the love of his life, is tremendous. And the grief and stress of both scenarios are understandable triggers for such a character who has been portrayed as struggling with sobriety.

However, that's not to say that Deacon is likely to simply give up and hit the bottle — particularly at this stage in his life when he's managed to confront his alcoholism and battle the health implications that his alcohol problem wrought for him. Instead, I have a feeling that Nashville will show us Deacon at his absolute strongest.

As an audience, we'll hopefully get to see the character fighting for his right of custody, and maintaining his sobriety as a way to honor his late wife. In fact, there's a possibility that a great deal of Deacon's future will be positioned in ways that the character can constructively mourn and pay tribute to Rayna.

"That’s going to play into upcoming stories. It’s not finished and that’s a big — that is, in fact, the dilemma that they face in the eleventh episode, the finale of this first part of the season. The fact that it’s not finished, and what are they going to do?"

Which I find to be extremely significant. Because, though the album is incomplete, it's easy to imagine that Deacon will be eager to finish the album in some way that can honor Rayna's life, and the love and musical connection he shared with her. Moving forward, this album of duets could come to represent much of Deacon's future on the show.

The album, though unfinished, could offer an opportunity for closure and for paying the ultimate respect to his wife. And perhaps, moving forward, Deacon will also realize that his life as a father, a musician and as a widow can also be lived in a way that pays tribute to Rayna. And I can't wait to see exactly how he goes about doing that.