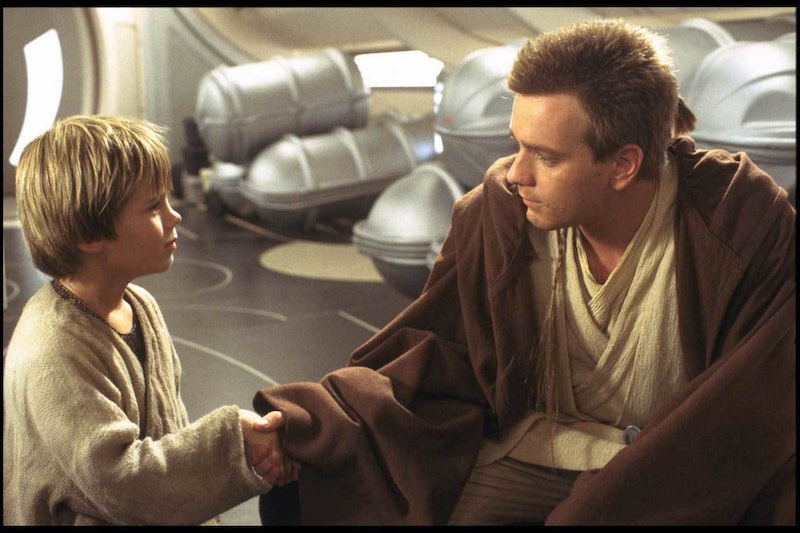 Obi-Wan Kenobi is getting his own spin-off movie as part of the new Star Wars franchise of standalone films. Very little is known about the film, other than the fact that it is currently in development. (Bustle has reached out to Disney for comment.) In fact, The Hollywood Reporter reports that there is no script, so nobody yet knows what the Obi-Wan Kenobi spin-off will even be about.

The report is vague on the plot details, revealing only that Disney is in the very early stages of developing a standalone Obi-Wan Kenobi movie, following in the footsteps of Rogue One and the Han Solo film currently in production. However, the report does reveal that the studio is in talks with director Stephen Daldry (Billy Elliot, The Reader) to oversee the project. Fans of the Star Wars saga know that Obi-Wan, the iconic Jedi Master who introduces both Luke and Anakin to the ways of the Force, has been previously played by two actors. Alec Guinness portrayed the hero in the original trilogy, with Ewan McGregor taking up the role in the prequel trilogy. And the news of a possible standalone movie has fans wondering if McGregor could reprise his role.

McGregor has expressed enthusiasm for the idea of starring in Obi-Wan Kenobi movies before. "Of course, I'd be happy to do it," McGregor said when asked about the possibility during an appearance on Jimmy Kimmel Live. No reports indicate that McGregor has been included in talks about a potential spin-off, but if he were to officially return to the franchise, it would set a pretty wide window for when the Obi-Wan movie would take place.

If McGregor returns, it seems likely that the Obi-Wan Kenobi spin-off would take place in the 19 year gap between the events of Episode III — Revenge of the Sith and those of Episode IV — A New Hope. Perhaps the film would trace Obi-Wan's journey from Jedi Master to recluse. It's an idea that McGregor himself has endorsed. "I think the story between Episode III and Episode IV, I think there's a story there. I think that's the Obi-Wan movie, if there is one," he said in an interview with Collider.

Having an Obi-Wan Kenobi movie set between Episode III and Episode IV could also potentially have huge repercussions for the current trilogy. Specifically, it could help fill in the blanks on a huge piece of mythology: Rey's parentage. Since The Force Awakens was released, Rey's mysterious family origins has been a huge source of discussion among fans, with one popular theory being that she is a descendant of Obi-Wan. Perhaps the Obi-Wan Kenobi spin-off will find the Jedi disenchanted with the Order and leaving to start a family of his own.

Another possibility would be for the movie to follow the Han Solo model and tell the story of Obi-Wan before Episode I — The Phantom Menace — a younger Obi-Wan movie, if you will. Setting a movie prior to Episode I would allow for Disney to recast the role and open the potential to bring back Liam Neeson's Qui-Gon Jinn, Obi-Wan's mentor.

There are infinite possibilities for what an Obi-Wan Kenobi spin-off could be about. But it's safe to say that fans will be happy regardless of the story. As long as Obi-Wan Kenobi graces the big screen once more, you'll hear no complaints from me.