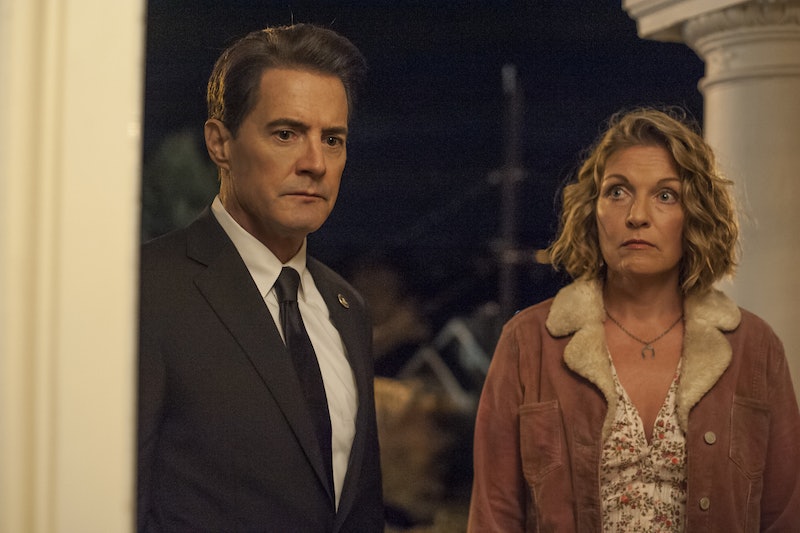 After Dale Cooper presumably vanquishes Evil Dale Cooper, he is able to go back in time to Feb. 23, 1989, thanks to the smoky orb coming out of a tea kettle that is Phillip Jeffries now. While in 1989, he tries to save Laura Palmer from being killed by BOB in the form of her father Leland Palmer. Yet, as Dale is leading her away from her doomed fate, Laura disappears. Still, even with her disappearance, Pete Martell never finds Laura's dead body when he goes out fishing like he did in the original Twin Peaks, so did Twin Peaks: The Return save Laura Palmer? Lynch may have changed the entire narrative of his opus.

While Cooper in the first episode of the two-part finale does end up in a David Bowie-as-a-tea-kettle-concocted 1989, it's not as easy to say what timeline he is in at the end of Part 18. That's because when Dale Cooper and an aged Laura Palmer — going by the name of Carrie Page — arrive in Twin Peaks at the Palmer residence, Sarah Palmer doesn't live there and instead, the Tremond family owns the home. (Tremond is a name used by the old woman who appeared to Laura in Fire Walk With Me and Donna in Twin Peaks.) Either by crossing over into another dimension or by trying to save Laura, Dale Cooper is not in the Twin Peaks he recognizes anymore. Does that mean it's 1989? Does it even matter? Probably not and no. All that's important to know is that Cooper isn't where he — or fans — expected him to end up in. And, because of his actions, at least some version of Laura Palmer is alive.

Since it's unclear about his whereabouts, let's just say that Cooper is in another dimension with Carrie/Laura. And going by that logic, what happened to Cooper and Laura in the real — or, more accurately, original — timeline? If Laura is never killed in 1989 — and Cooper already destroyed BOB — was she able to survive and live a life without BOB terrorizing her through her father? Or did she just disappear with Cooper's interference leading her to enter into the Lodge or another dimension regardless of being brutally murdered? If Laura never dies, does anything that happened in the original series happen at all? Sure, if she disappeared, an FBI investigation may have still occurred, but Laura's death potentially not happening changes everything, retcons the original series and Fire Walk With Me, and boggles the mind.

Without a fourth season of Twin Peaks, fans may never know what repercussions Cooper's meddling in the past had. But because of The Return, you may never be able to return to the original Twin Peaks and watch it the same way again.