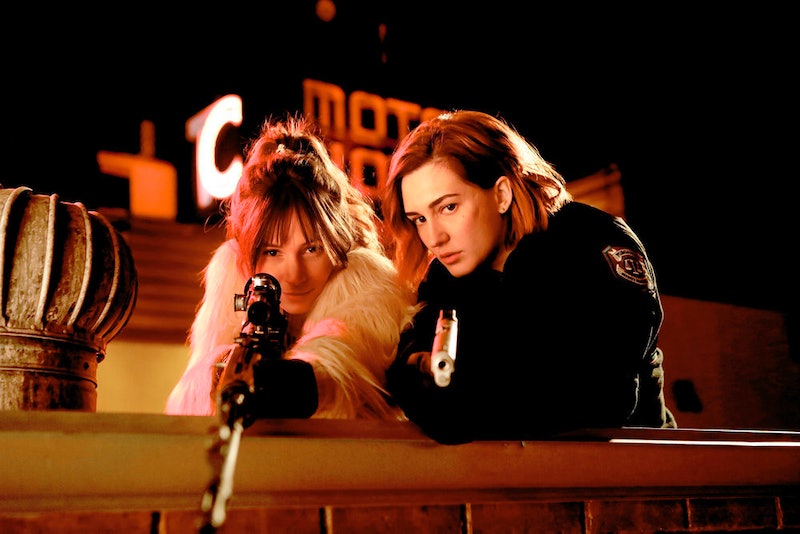 Spoilers for Wynonna Earp Season 3, Episode 4, "No Cure for Crazy." There's always that one person who's convinced that everyone's out to get her, but in Waverly's (Dominique Provost-Chalkley) case, it's actually true. The youngest Earp has been through a lot recently, what with nearly being turned into vampire chow and finding out that Nicole (Katherine Barrell) survived a brutal Bulshar attack as a child. And her problems are only compounded in this episode — first when she thinks her mom is trying to kill her and then when she finds out she's actually being trailed by a creepy ghoul. So who's the demon following Waverly on Wynonna Earp, and why is her mom so terrified of it?

When Waverly visits her mother (Megan Follows) in prison, she first seems to recognize her daughter before screaming bloody murder. "She's unbound!" Michelle Gibson yells. "She's loose!" The youngest Earp is convinced her mom is trying to kill her (and who wouldn't be?) until she finds a now-escaped Michelle building a pentagram in their barn (as you do). Mommy dearest begins mumbling about a demon again, but this time, Waverly asks, "Is it me?" Her mom replies, "No, sweetheart. But she came for you." Michelle's daughter then turns around and sees a terrifying visage behind her.

And then there's Jolene, whom audiences meet at the very end of the episode. It's both hysterical and disconcerting to see Nicole, Doc (Tim Rozon), and Waverly all grinning blankly at Wynonna (Melanie Scrofano) like porcelain dolls. "You're all here," the gunslinger pants after running into the house. "Of course!" Doc exclaims, as he holds a cupcake. "It's the place to be!" This is clearly the work of Jolene, the terrifying Betty Crocker who smashes a brownie into Wynonna's mouth. "Back. The truck. Up," the heir says, immediately sedated. "That is — more please!"

It's most likely that Jolene is the demon that Waverly and her mom sees in the barn, which would explain the "she" Michelle was going on about. If that's the case, Jolene would have to be a shape-shifter, but audiences have seen weirder things happen in Purgatory. However, another theory is that she's simply working with the demon in the barn. "Yes, Wynonna. There is a demon coming," Jolene tells the now-complacent Earp. "And it's going to kill Waverly." Perhaps she's lying to throw Wynonna off her tracks, or maybe the first demon is still with Michelle in the barn. Either way, hopefully Jeremy (Varun Saranga) or Kate (Chantel Riley) will come to their rescue, because it will take more than squats to work off those cupcakes.

Before all of this goes down, however, Waverly learns some vital information about her mother. First, the bad news: Sheriff Nedley (Greg Lawson) reluctantly tells her that Michelle went to prison after burning down their barn with a young Waverly inside. However, the youngest Earp somehow remained unscathed (a coincidence? I think not). Now, the good news: It's likely that there's something going on with Michelle that's making her act this way. "She kept insisting that she was trying to vanquish a demon," the police chief says of that evening at the barn. "Look, I don't know what happened that night," he says, "but there isn't an evil bone in Michelle Gibson's body."

That's great news for Waverly, but there's still a demon out to get her, and it's likely she's standing in her dining room. Not to mention that Michelle is currently tied up in the barn. Worst. Mother-daughter reunion. Ever.