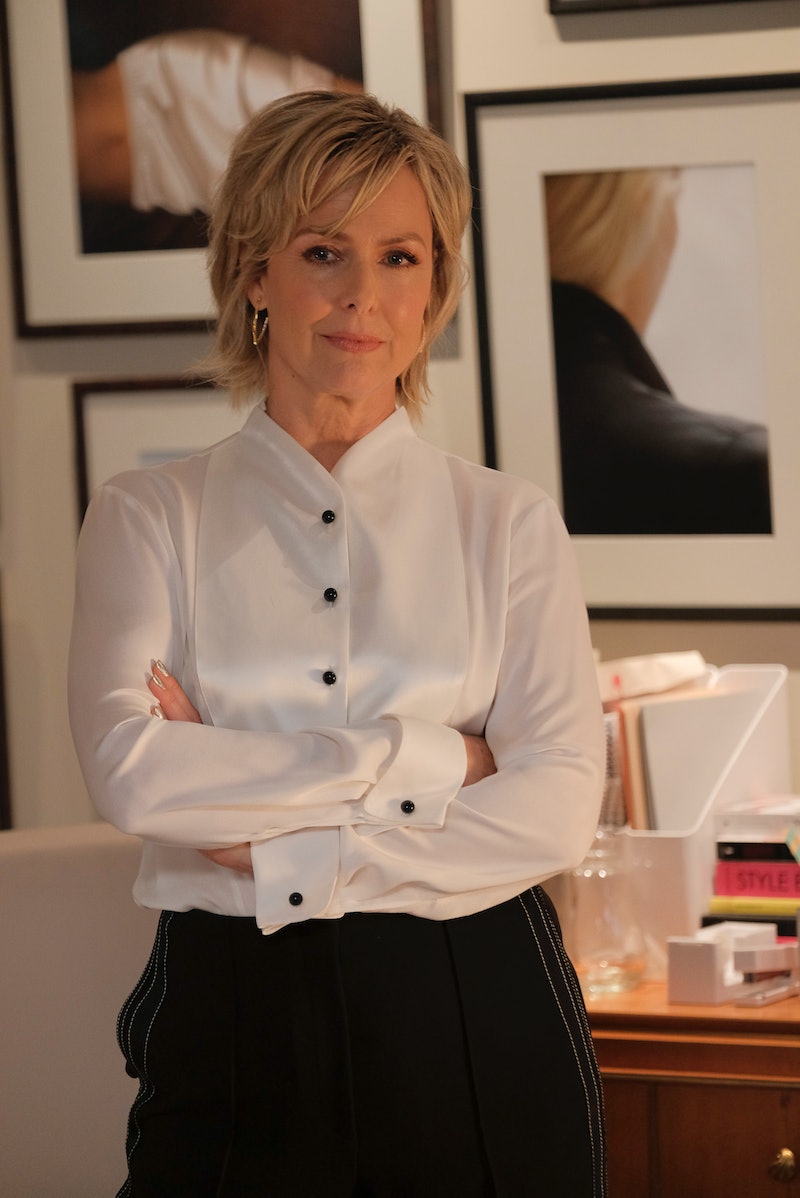 Spoilers ahead for the Season 3 finale of The Bold Type. "I don't know what I'd do if I didn't have you guys and Scarlet to rely on," Kat says in the final moments of The Bold Type's Season 3 finale. Unfortunately, she may have spoken to soon. Seconds later, she, Sutton, and Jane arrive at the magazine to see the newsroom getting dismantled by movers. It's unclear what's happening at Scarlet or where Jacqueline is, but whatever the case, it can't be good.

The first idea that comes to mind is that the print magazine could be getting axed. Print media has been struggling in the real world for quite some time, and it would be unrealistic for The Bold Type to not address that on the show. Plus, star Katie Stevens (Jane) previously told The Hollywood Reporter that the digital versus print struggle would be a central topic in Season 3, and this is certainly one way to drive that issue home.

"We are moving into a digital age and how do we cope with that? How do we move along with that?" Stevens said. "I think that its great to talk about especially because we're focusing on a print magazine."

Perhaps that will extend into the next season too. Jacqueline fell out of favor with the board a full season ago, and the company may have finally decided to oust her in favor of a digital-only Scarlet. Maybe the clearing out of the newsroom is because all those print writers lost their jobs. (Although that doesn't make complete sense, since Jane continued to work in the newsroom even after Patrick poached her for digital.)

It could be possible, too, that the board was so unhappy with Jaqueline overhauling the magazine at the last minute that they shuttered the whole brand. But that would be pretty drastic. Hiring a new editor or transitioning to digital only would make much more sense. In any case, something is up and it likely has to do with Jaqueline since she was nowhere to be found.

Plus, the Scarlet EIC said something pretty ominous during the final episode that could have foreshadowed her fate. After deciding to re-do the magazine hours before it went to print, the board vetoed the idea. Jaqueline went ahead with it anyway, though, in a move she admitted was risky. "I also know in my gut that it's the right thing for Scarlet," she told Patrick, adding that, "Scarlet is still [her] magazine... until it's not."

But perhaps the time has come for Jacqueline to walk away. She's been walking on thin ice for a while now: last season, she published Jane's essay about how Scarlet's insurance wasn't covering her egg freezing. Being publicly called out by their own writer didn't make the company look good, and Jacqueline was removed as head of digital as a result. Patrick was then brought in, and the board seems happy with the direction he's been taking the "dot com," as he likes to call it.

It's possible that the board handed Patrick the reigns to print as well, and that Patrick was the one who decided to go digital-only. He's a pretty weird guy, and even making the move out of the newsroom to a new work space or a different floor in the building would not be outside the bounds for his character.

If Jacqueline was ousted, you can expect that Jane will stand by her side to right this wrong. But they may be fighting a losing battle against the board — especially if Richard takes the job in San Fransisco. He's at times been Jacqueline's only supporter on the board. If he leaves, she won't have much of a chance at persuading the higher ups that her changing vision is actually good for the brand.

Of course, something totally innocuous could be happening. Perhaps the board loved the issue so much that they're letting Jacqueline redecorate the newsroom. Maybe they're just moving the team to a different floor. Perhaps the magazine is expanding and needs a newsroom layout that better accommodates everyone. Heck, Jacqueline could just be taking a well-deserved vacation after redoing half an issue in a day.

But something says it will be a little more dramatic than that. Fortunately, the show has already been renewed for a fourth season, so we won't be left on this cliffhanger forever. And with Kat, Jane, and Sutton around, don't expect Scarlet print to go down without a fight.

More like this
Rhaenyra's Sons May Not Last Much Longer On 'House Of The Dragon'
By Grace Wehniainen
Laenor’s Fate On House of the Dragon Differs from The Book In One Crucial Way
By Kadin Burnett
These Memes & Tweets About Alicent in 'House Of The Dragon' Prove She's The Queen Of Messiness
By Grace Wehniainen
How Much Are The 'Schitt’s Creek' Stars Worth?
By Hugh McIntyre
Get Even More From Bustle — Sign Up For The Newsletter