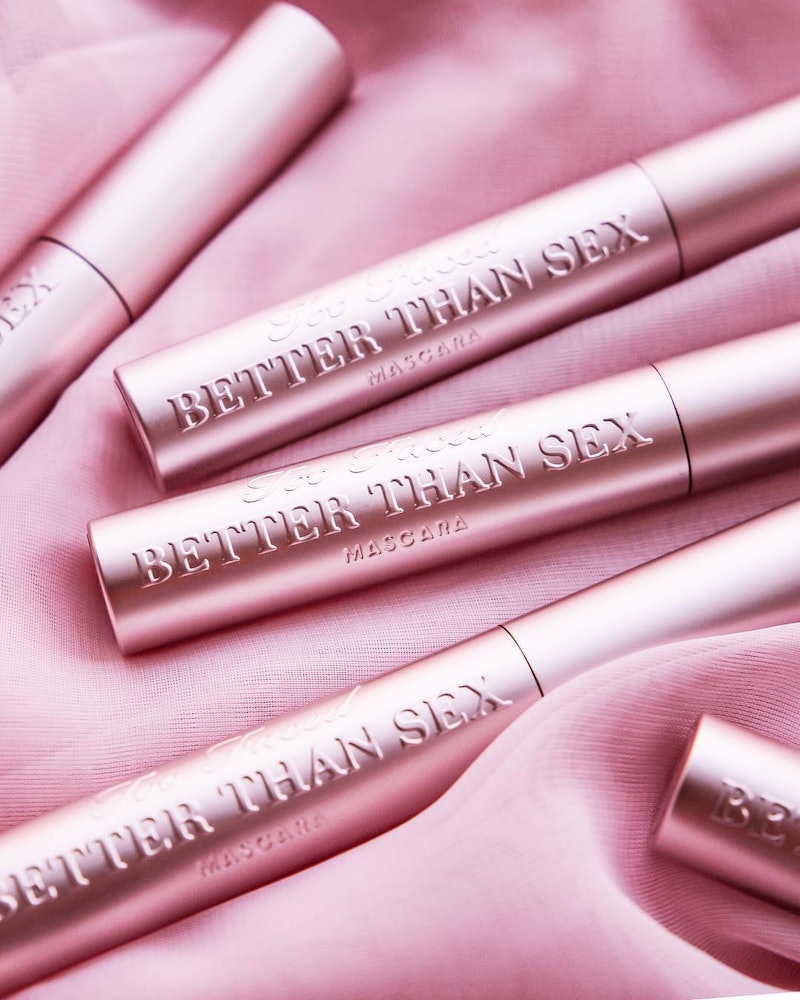 Brands certainly know how to name products. From NARS Orgasm blush to Urban Decay's Naked line, they certainly don't shy away from double entendre, and neither does Too Faced. Their latest coyly named product, though, may just be their best yet for customers. The new Too Faced Better Than Sex Vault is named A Year of Great Sex, and honestly, it'll take care of all your needs (at your makeup needs, that is).

If you're a beauty junkie or even a passing fan of great products, you've likely heard of Too Faced's iconic mascara Better Than Sex. The pink packaged, lash amplifying product is a favorite about gurus (like Jackie Aina) and every day customers. In fact, it's Sephora's bestselling mascara and Ulta's second. With over 6200 five-star reviews on Sephora and a 4.2 star rating on Ulta, it's clearly a fan favorite. Outside of all that, though, it's the best-selling prestige mascara on the market. No wonder there's a vault now, right?

What's in it? It's exactly what it sounds like. It's an entire collection of the OG Better Than Sex mascara and just the mascara. With a whopping five tubes, the vault will last you all year AKA you can have great sex year around.

Why do you need five tubes of mascara? Well, as beauty junkies know, you need to get rid of mascara roughly every two to three months. Yes, really. Dried out or overused mascara is basically a recipe for an eye infection and is kind of bacteria city. Five tubes of Better Than Sex will make sure that you're always getting the freshest looking lashes possible.

Of course, the name isn't the only thing that may raise an eyebrow or two. With a name like A Year of Great Sex that's home to a collection of Better Than Sex mascara, a $69 price tag is bound to make a few people giggle. Outside of the double entendre of the price (whether intentional or not), there's also more to consider when it comes to its value.

A single tube of Better Than Sex retails for $24. That brings the total for five tubes up to a whopping $120. That $69 price tag on the Better Than Sex vault sounds pretty good now, right? By shopping the vault, you'll save a major $51 and score a year's supply of mascara.

As for when you can snag the vault, it launches tomorrow Sept. 13, but it's not alone. The Better Than Sex Vault is part of Too Faced's larger holiday 2018 collection, and it's a doozy.

Too Faced's 2018 Holiday Collection features three new palettes with accompanying minis (including a Pumpkin Spice launch), the new Gingerbread Spice palette (which, yes, does smell like Gingerbread), beauty crackers and ornaments, a brush set, and more. Basically, Too Faced's holiday items are must shop.

If you're a mega-fan of Too Faced's Better Than Sex mascara, the Year of Great Sex vault is going to be your new favorite launch from the brand for the holiday season. With a massive discount, adorable packaging, and a bomb product, you'll want to shop this launch immediately.