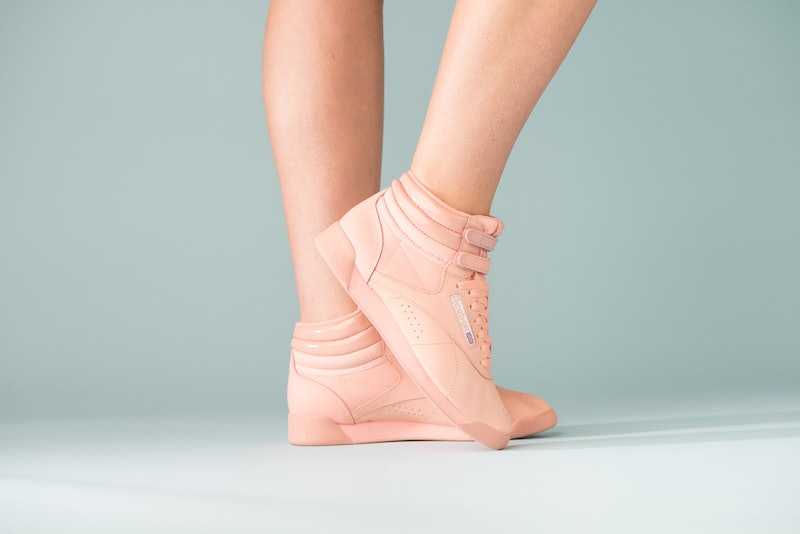 Netflix's original series GLOW serves up heaping doses of girl power — and now you can get the look of the tough-as-nails women that make the show undeniably badass. A collaboration that combines everything you loved about the '80s with the prowess of the series' female cast, a Reebok x GLOW shoe collection just launched.

There's too much to appreciate about GLOW, a comedy created by Orange Is The New Black creator, Jenji Kohan. Based on a true story, the Netflix hit explores the world of all-female wrestling while capturing the bravery, resilience, and unity of the women portrayed in the show. But it's not just the series' pro-female essence that makes it so worth the watch. You'll come for the women empowerment, but you'll likely stay for all of the colorful, oh so '80s fashions that the 'Gorgeous Ladies of Wrestling' serve.

There are leotards a-plenty, leg warmers galore, and more funky prints than you can handle as the series' characters show off their skill and athleticism. Getting in on the action for the show's upcoming season two, airing on June 29, Reebok has partnered with GLOW to rebirth an iconic '80s sneaker for the show's actresses. But they won't be the only ones to rock the new kicks, as the collab is now available to all shoe lovers.

Try to envision the decade of big hair, neon prints, and aerobic wear without Reebok's classic Freestyle Hi sneaker for women. It's nearly impossible. So, it makes sense that the sneaker vets broke out such a throwback style for their GLOW collaboration.

Introducing two new, '80s friendly versions of the shoe, Reebok's newly released line draws inspiration from the pastel hues popular during the decade that the ladies consistently wear in the show. Available on Reebok's website, the feminine kicks are the same exact shoes fans of GLOW can spot on the actresses feet during season two. So, you can really imitate the gorgeous ladies' style to a T if you're a GLOW fanatic.

The super on trend style within the new line, the rosy Freestyle Hi sneaker is too chic to pass up. It falls in line with current rose gold crazes while doing '80s fashion some major justice. Of all the Freestyle sneakers available in Reebok's stock, this has got to be one of the most stylish pairs.

Then there's the white version in the new collection, falling most in line with back-in-the-day Freestyle Hi sneakers. But these aren't just any old plain Jane, white Reeboks, having a colorful GlOW-approved twist added into the mix. This style features pastel pink, green, and yellow coloring on the velcro straps and neck of the shoe to make for one funky pair of kicks.

If you want to get your GLOW on, these shoes are the summer sneaks for you. Once you drop $85 for these kicks, get ready to kick some butt, GLOW style.