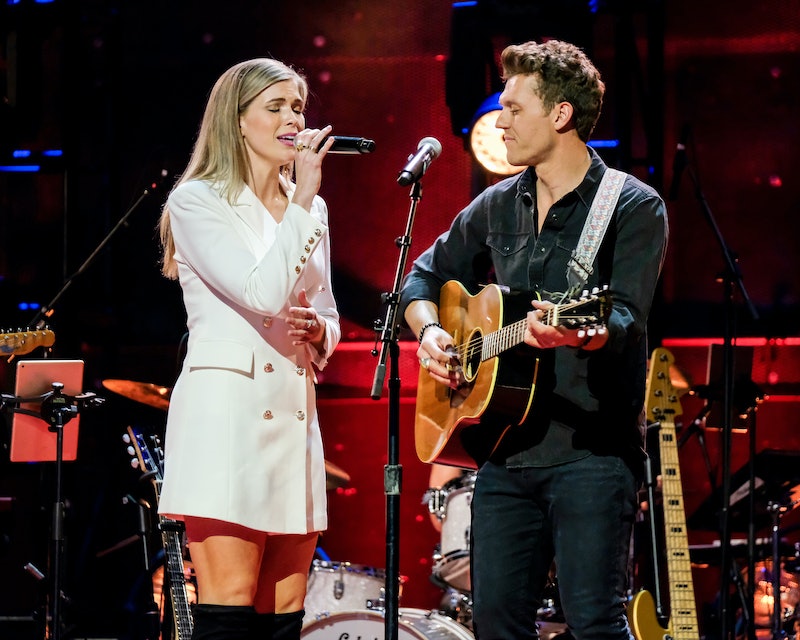 She may have been torn between two different men on The Bachelor: Listen To Your Heart, but after leaving the show, Julia is focused on her one true love: making music. In addition to continuing to work with the charity she founded, Singing At the Top Of My Lungs, Julia has recently released two singles. The first, "Wishing Well," was released on April 17, and seems to have been inspired by her tumultuous relationship with Brandon on the show.

"Ever catch yourself falling for someone even when you have a good feeling they're bad news?" Julia wrote on Instagram of the song. "You just close your eyes, open your heart, and hope for the best? I’m all too familiar with that feeling, and that’s what inspired 'Wishing Well.'"

Julia released her second single, "End of Every Lie" on April 24, which also appears to have been inspired by her time on the show. "Tune in tonight to find out why this song is SUPER relevant," the aspiring singer-songwriter wrote on her Instagram Story on May 4, ahead of her final episode of Listen to Your Heart. "Wishing Well" is apparently "also relevant" to her time on The Bachelor — and the love rectangle she found herself in during filming.

As well as releasing new music, Julia has been reflecting on her Bachelor experience on her social media platforms, particularly in regard to the sometimes "embarrassing" way she behaved on the show. "Two things can be true: I made mistakes, and you are only seeing a snippet of the big picture," she wrote on April 29 alongside a video of her performance with Sheridan. Though she maintained her connection with Sheridan was "real," Julia admitted she was "unable to see how good it was with him because I was getting played by another guy ... I was very hurt and I couldn’t see anything clearly."

She also addressed her dramatic confrontation with Savannah in that post, writing that she should have spoken to Brandon about the situation instead. "I apologized to her as soon as filming was over," Julia wrote. "In the moment, I felt like I was listening to my heart ... watching it play back, I know it was hurtful and I am very sorry." She continued, "I am using this time to reflect. I'm taking notes and as the show airs, I hope to share more about what I am learning through this in the coming weeks."

Julia's time on the show may have featured more heartbreak than anything else, but it seems like her Bachelor run has been a major source of inspiration for both her music and any future relationships.

More like this
'Bachelorette' Vet Clare Crawley Revealed Her Stunning Wedding Photos
By Stephanie Topacio Long
Tahzjuan Took A Cruise With These Bachelor Nation Alums After Visiting Zach's Season
By Kayla Blanton and Grace Wehniainen
The Bachelor’s Christina Mandrell Comes From One Of Country Music’s Most Famous Families
By Brad Witter
'Bachelorette' Vet Clare Crawley Unveiled 2 Special Wedding Day Accessories
By Stephanie Topacio Long
Get Even More From Bustle — Sign Up For The Newsletter
From hair trends to relationship advice, our daily newsletter has everything you need to sound like a person who’s on TikTok, even if you aren’t.