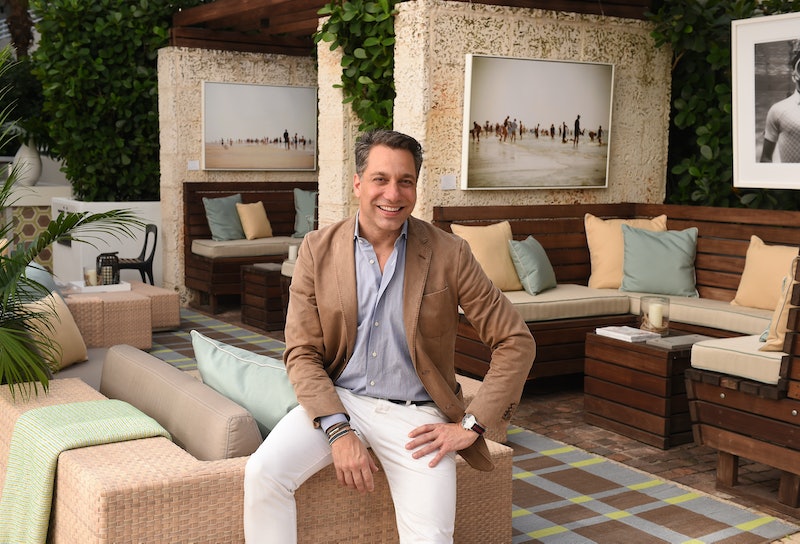 A new Fab Five is coming to Netflix, but we can't forget the original experts that ambushed drab heterosexual men with advice and changed the face of Bravo forever. And on Feb. 7, the show is returning in a Netflix reboot with a new Fab Five. What is former Queer Eye For The Straight Guy star Thom Filicia doing now? The interior design expert may not be groaning at man caves on Bravo anymore, but he's still at the top of his field.

On the show, Filicia had the daunting task of redecorating the homes of the show's subjects in a short amount of time, often employing the other four to help in a pinch. Most of the original guys have kept working and stayed in the public eye since the series ended in 2007. Filicia started working on other projects almost immediately. In 2004, Filicia replaced Kirstie Alley as the spokesperson for Pier 1 Imports. He published book in 2008 titled Thom Felicia Style: Inspired Ideas For Creating Rooms You'll Love and another book with a forward from Tina Fey called American Beauty: Renovating And Redecorating A Beloved Retreat that was published in 2012.

Filicia has also appeared on television since the show in various programs, including his own design series Dress My Nest, and guest spots on Million Dollar Contractor, Tacky House, and Radio City Holiday. Airing on the Style network, Dress My Nest was practically a Thom-centric spin-off of Queer Eye. He and the rest of the original Queer Eye cast appeared on Oprah's Where Are They Now on the OWN Network in 2014.

Today, his New York City-based design Thom Filicia Inc. is still running. He has a home collection, Sedgwick & Brattle, that includes furniture, decor, lighting, bedding, and everything you need to make your space special. His showrooms are located in New York City and furniture capital of the world, High Point, North Carolina.

According to a 2017 interview with South Florida's The Real Deal, Filicia is currently living in Miami and designing luxury condos. In the interview, he talks about the difference between commercial and personal designing — the latter, of course, is what he did for the Bravo series and still does for many other clients.

"On a personal project," he said, "the person gives you the lifestyle. With a building, you create the identity and the lifestyle to appeal to a certain demographic." It becomes his job, and the job of his firm, to create a personality for a building that separates it from the rest of the block, so to speak. "It’s our ability to give it an identity and a soul," Filicia said. "Design without a soul feels very flat."

That's one of the great things about Queer Eye, and reality shows in general that feature experts. The personalities you see on screen keep working, but not necessarily in television. They have lives outside of the Bravolebrity circle, especially pioneers like the original Fab Five.

Ah, the early 2000s. It was a simpler time when gay men forcing straight men to get their acts together on television was a revolutionary concept that actually had a cultural impact, according to Variety. As the promo for the Netflix reboot says, the new Fab Five are fighting for acceptance while the original were fighting, first, for tolerance.

In the Oprah reunion, the original cast said that they didn't set out to be activists, but that just being out on television was powerful. "I was very proud of the fact that there was not an agenda," Filicia said in that interview. "It all happened because we were working together, we were having fun, and we were genuinely interested in helping this person."

As Antoni Porowski, the new food expert in the Netflix series told Variety in an interview, “helping people is never going to get old." That's what Queer Eye is all about, and hey — at least nobody uses the word "metrosexual" anymore.