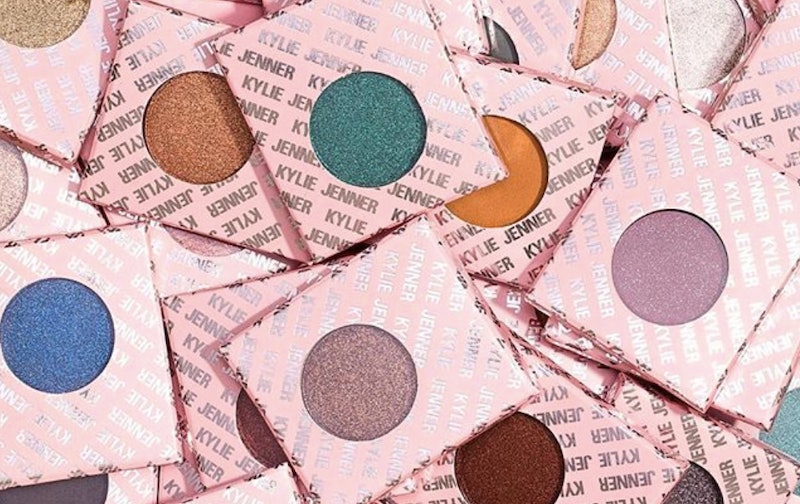 After becoming one of the youngest billionaires ever, Kylie Jenner is undoubtedly a makeup mogul. Amid creative direction and running her cosmetic company, Kylie Jenner is launching 28 new eyeshadow singles. Not to mention some of the shadows singles are so pigmented it should be a sin.

Jenner has already launched a plethora of eyeshadows, both in the forms of palettes and singles. The makeup mogul launched her brand’s first 28 eyeshadow singles in Sep. 2018, and is now serving eyeshadow pigments in another 28 beautiful shades March 2019. Kylie Cosmetics took to Instagram to share the news about the launch of the new singles with a photo of the shades in an entire palette.

“Ready for more SHADOW SINGLES!?” The brand wrote in the caption. “You guys asked for more, so this Friday we are launching 28 new matte and shimmer shades from your favorite Kylie Cosmetics palettes and a couple of BRAND NEW ONES!”

The shadows contain everything from peaches and nudes to reds and shimmery blues. Jenner’s beauty brand also plans to offer a magnetic palette for fans who want to customize and collect all 28 shades.

Kylie Cosmetics also announced that the shadows are set to launch on March 15 at 8 a.m. PST and 11 a.m. EST on kyliecosmetics.com.

Kylie also shared news on her personal Instagram Stories that while 24 of the eyeshadow singles are from previous palettes, four shades are brand new additions.

In her Instagram Stories, Kylie pointed out the new shades as Caribbean Girl, Turks & Caicos, Lost Without You, and Butter Rum.

Kylie calls Caribbean Girl a green color in her stories, but it's serving serious gold vibes.

Turks and Caicos is a deep turquoise shimmer shade that apparently looks amazing next to orange.

Kylie also showed off the royal blue shimmer that she names Lost Without You. This blue shimmer is one of the boldest shades out of all the shadow singles.

The final new shade added to Kylie's shadows is the only matte shade. Butter Rum is a soft brown with pink undertones.

While Kylie Cosmetics fans wait for these new shades and others to drop, they can preemptively buy the brand's magnetic palette for $24.

For the most personal looks from Kylie's favored colors in each of her palettes, fans can create one custom palette with the 28 shades. Fans can also use the magnetic palette to include highlighters as well as blushes and bronzers. Plus, the palette already comes with a hefty mirror.

Kylie had previously launched the first set of 28 eyeshadow singles in 2018 for the makeup brand's first customizable palette. The first launch featured plenty of rainbow shades such as Light Year, a bright yellow matte, Love Potion, a hot pink shimmer, and Mase, a burgundy red shimmer.

There's no stopping this makeup mogul once she's started. If Kylie continues to launch more custom palettes, a separate closet for beauty products could be required in the near future.