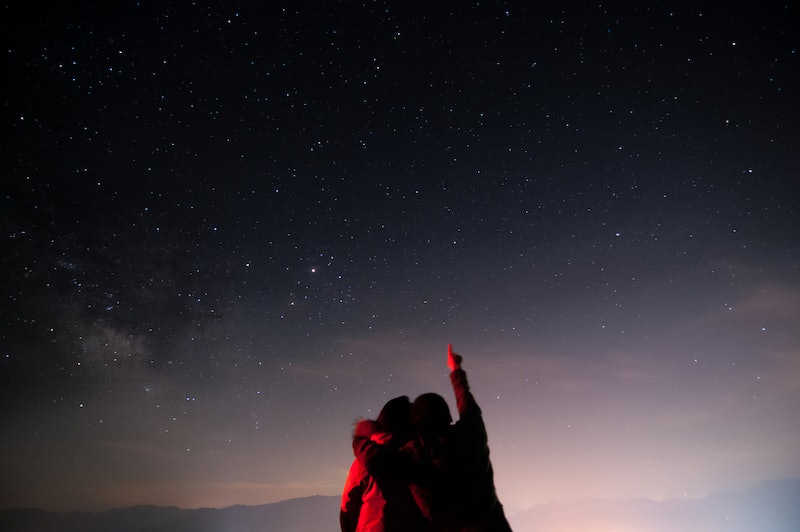 If you possess both a pulse and an Instagram account, you likely know about Mercury retrograde. Even if you're not passionate about astrology, you've probably heard the astrological theory that when a planet is retrograde, the parts of life it governs can become complicated. So when Mercury is retrograde — which occurs for several weeks at a time, three to four times a year — communication, technology, and transportation can become confused, and you might want to spend some time pausing and reflecting instead of rushing to make decisions.

And even if you've never heard any of this stuff before, you probably still know that one of your friends will blame Mercury retrograde if you phone randomly breaks.

But while astrologers have been examining Mercury retrograde for thousands of years, the phrase was rarely used outside of astrology circles until a mere decade ago. In the early 2010s, Google searches for phrases like "mercury retrograde" and "is mercury in retrograde" began sharply increasing; today, those terms are three times as popular as they were in 2010. So what changed? According to several prominent astrologers and other experts, the internet changed the public's relationship with Mercury retrograde; then, social media put it into overdrive.

Susan Miller, astrologer and founder of AstrologyZone: I started [AstrologyZone.com] in 1995, and we started from block one. There was no color [online]. There was no video. They started to have videos the size of a postage stamp, but then it crashed your computer when you tried to play it. I thought, "This is never going to work." ... Even though it was really, really hard, it was also so much fun to be part of covered wagons going west. It was just so exciting.

Shelley Ackerman, astrologer and International Society for Astrological Research board member : [Mercury retrograde became more well-known] in the past 20 years or so, with the internet. Astrology itself has become very popular, so now that we have the luxury of these wonderful astrological calendars, we can keep track of what's going on. It just becomes easier to keep track of cycles, and Mercury retrograde is something that happens several times a year ... the public is much more aware of many astrological terms the past few years.

Miller: Most people in the past used to look at me like I was a little crazy [when I mentioned Mercury retrograde].

"An Astrological Quirk Brings Fear and Trembling to Some Corners of the Internet," The New York Times, Sept. 30, 1996: "Technology buffs who do subscribe to these principles are legion, and World Wide Web sites, Usenet groups and on-line astrology services have been offering warnings for weeks about the period of Mercury's strange motion in the heavens ... One confessor on a Compuserve astrology forum realized Mercury was retrograde because 'suddenly all my friends were calling on me to fix their computers.'"

Kate Trgovac, creator of Is Mercury In Retrograde: I am not an expert on Mercury, or an astrologer, or anything. Just a nerd girl whose nerdy friends blamed Mercury for a lot of bad computer mojo ... I first heard about the potential influences of Mercury being retrograde back when I worked on a tech team. Every once in a while, when something glitched on a computer or server, the exasperated grunt of "Ugh, Mercury must be in retrograde" could be heard. I didn't really think too much about it. Seemed to be a popular touchstone among tech types. I heard it quite often in the late '90s and early '00s.

Annabel Gat, Broadly staff astrologer and author of the forthcoming The Astrology of Love & Sex:: Mercury retrograde ... it sounds like a catchphrase and, it's something that's very easily definable to people, which is basically: "Mercury is retrograde. Oh my God, everything is upside down, everything is haywire." It's something you can throw out there when things don't work.

Trgovac: I started ismercuryinretrograde.com in August 2009. The idea that Mercury could impact technical devices had come up again in conversation. I remember doing an online search to find out if it was true that Mercury was retrograde at the time, and had a hard time locating the information ... It turns out I started the site a couple of weeks before Mercury was due to turn retrograde [in 2009], so I did get about 5,000 visitors in that first month. I also think someone with lots of followers tweeted about it. And then traffic tapered off for about a year and a half — maybe only 1,000 visitors a month. Then in mid-2011, something started to click with the site and traffic began growing. 10,000 visitors a month for about a year. Then a couple of years later, traffic was about 50,000 visitors a month.

When Did Mercury Retrograde Go Mainstream?

Ophira Edut, astrologer and one-half of the Astro Twins: When did [I] first start to notice an uptick in interest in Mercury retrograde among the general public? ... Probably three or four years ago, as news reporters started to pick up on all of the talk of the super moons and eclipses. There just started to be a little more interest in people's interest in astrology. I think maybe it was when the news needed a lot more to report on, so they seized on Mercury retrograde. I think it was [featured in]...some major news source, and then all the others started copying it.

"Retrograde Beliefs," The New York Times Magazine, Jan. 9, 2015 : "On Jan. 21, at 10:54 a.m. Eastern Time, Mercury will begin its first pass by Earth of the new year. For about three weeks, it will appear to move backward across our sky and will, according to astrologers, disrupt technology, communication and human concord. Facebook and Twitter will clog with reports of appointments missed, important email sent to the spam folder, wars between nations, cars crashed and iPhones dropped in toilets, all followed by some version of the hashtag '#mercuryretrograde.'"

Gat: There was an interview with Taylor Swift...where she explains Mercury retrograde.

Taylor Swift, MTV.com interview, Jan. 22 2015: "When Mercury is in retrograde, basically that means that everything is going to be completely wrong and messed up and miscommunicated."

Gat: [In 2012 or 2013], it was sort of the beginning of when Instagram was becoming popular, and there were memes [about astrology/ Mercury retrograde]. Mercury retrograde had started becoming more of a catchphrase. Then Taylor Swift said it, and it really became more ingrained in people's minds.

And then it just snowballed from there. Because the more astrology memes ended up on Instagram, the more people wanted more astrology stuff, and the more [Mercury retrograde] became a big catchphrase.

Miller: [Public interest in Mercury retrograde has increased] in the past three or four years. It's very recent.

Edut: I think people are looking for answers, and I also think that Instagram and social media have spread new ideas. I think before, we just got what the news gave us; now that the people are creating their own news and buzz with Twitter and Instagram, I think people are talking about more everyday spirituality topics.

Mecca Woods, Bustle astrologer and author of Astrology for Happiness and Success: I think a big chunk of it has to do with the increase in people talking about it. You know, 15 years ago, we didn't really have social media outlets like Twitter and Instagram, and things of that nature. So I think now, there are more astrologers talking about it in public spaces, and people turning to astrology for guidance. I think that's probably a big reason why Mercury retrograde has become such a popular phrase.

Miller: More and more people, they're hearing [about Mercury retrograde] through word of mouth. And they're hearing it from their friends, that's all. So it's just a matter of people knowing more ... just like anything else, it's gone viral.

Why Are We All Obsessed With Mercury Retrograde Right Now?

Woods: We're constantly communicating [these days] ... And I think, between texting and emails ... I think it does make people hypersensitive to how we communicate, and making sure that the way that we're communicating is the right way.

Edut: Mercury rules technology, communication, transportation and travel, so the Mercury retrograde breakdowns tend to impact our lives more than others, and I think people really start to notice, "Oh shit, my computer went down," or the server crashed, or all these flights are delayed ... I always joke that it's the thing that makes a believer out of people — at least if not a believer, a "Hmm, maybe there's something to this astrology thing."

Trgovac: Mercury retrograde is such an easy and convenient touchstone for all those things that can go wrong, particularly with technology. It gives a rationale for those problems — and is more satisfying that just chalking it up to a "glitch in the Matrix." We like to feel that we have control over our lives, so if I can make sure my backups are working during Mercury retrograde and I can avoid doing any major OS upgrades during that time, I'm winning, right?

What Do People Still Not Know About Mercury Retrograde?

Gat: I think it's important for people to know that Mercury retrograde is an amazing time to take a break, to rest, to take time off of work, to turn it into the season's happy hour, you know, instead of only seeing it as a time that things go haywire ... Mercury is the planet of the mind, and our mind can't constantly be running forward. Sometimes the mind needs to take a break, and rest, and pause and reflect, and go backward.

Edut: They say not to sign contracts — well, sometimes you have to. But the problems are usually gonna happen in areas where we're rushing into a decision, or trying to force something, or not properly planning, not asking for support, not communicating our needs. So it's a good reminder of where modern life can fail us.

Woods: I think it's important for people to remember that, you know, Mercury's not doing anything to us to create havoc or confusion.

Miller: I thought that people could really benefit from knowing about Mercury retrograde, but there's a problem ... Some writers, some websites, are making it scary. Like "how to survive Mercury retrograde." It's not tragic. It's annoying, but it's nothing you can't deal with. Don't be afraid of it. And it actually has some good sides to it.

Ackerman: It isn't this odd, freaky thing. One out of five people are born during Mercury retrograde, so what's the big deal?

More like this
How To Turn Off TikTok Profile Views So You Can Stalk Other Accounts In Secret
By Alexis Morillo
Your 2023 Retrograde Calendar — & How Each Affects You
By Brittany Beringer
Ashamed Of Your Screen Time Stats? Here's How To Change That
By Alexis Morillo
Learning To Love, Not Judge, The Lunchbox Wives Of TikTok
By Esther Zuckerman
Get Even More From Bustle — Sign Up For The Newsletter
From hair trends to relationship advice, our daily newsletter has everything you need to sound like a person who’s on TikTok, even if you aren’t.