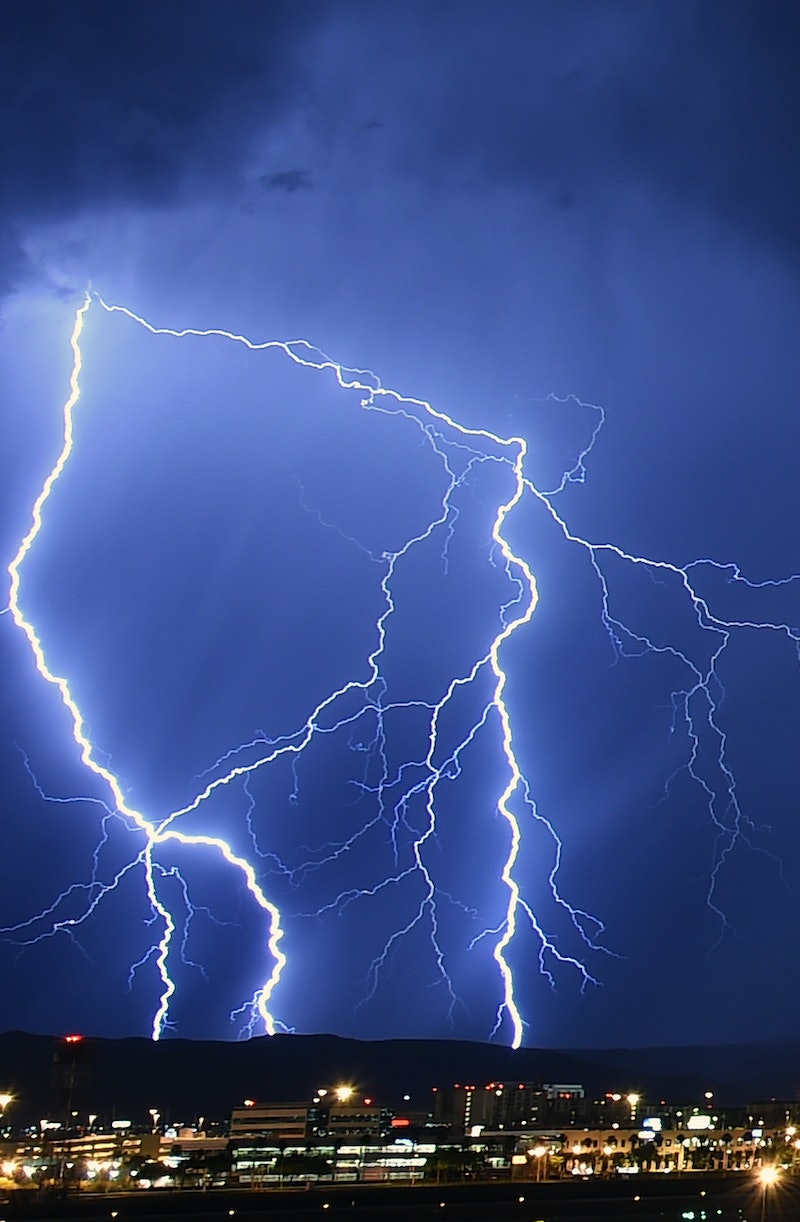 If it's felt exceedingly difficult to get ahead on anything this year, well, just know that you are not alone. I mean, aside from the fact that our planet is dying and we're probably living in a malfunctioning simulation, there have been so many dang retrograde planets in 2018 that it's hard to keep up with or even wrap your head around. Almost every single major planet went retrograde this year, many of them back-spinning simultaneously (during summer 2018, we literally had a whopping five planets retrograde at the same time). Whew. The cosmos have not been messing around, and this has officially made this year a hot mess of backward motion. It's been rocky to say the least, wouldn't you say?

You've likely encountered the term "retrograde," but here's exactly what it means. Every so often, each planet appears to move backward in the sky (this happens several times a year for some planets, and only every couple years for others). These periods can last anywhere from weeks to months, depending on the planet. Of course, they're not actually moving backward (because, you know, science and elliptical orbits and all that jazz). They simply appear to be moving backward from our vantage point here on Earth — retracing their recent steps instead of chugging along on their usual path. These periods are referred to as a planet's retrograde period, and during this time, the areas of our lives that the backward-moving planet governs will be affected in a myriad of ways. As you can imagine, this can be super frustrating, since it serves us up some intense energy that we're not exactly accustomed to.

So, retrogrades are a pain and they can turn things super topsy-turvy on us and no one really looks forward to them (in fact, some of us live in utter dread of these inevitable transits). But here's the thing: A year that's all about retrogrades is also a year that's all about growth. Just because we don't appear to be moving forward doesn't mean we're not going to be back on our merry way ASAP. Astrologer Jessica Lanyadoo has a fun lil' saying about retrogrades that I personally find super helpful: "REmember: REtrogrades mark a time to REview, REasses, REalign." I love this, because it's a great reminder that retrogrades aren't here to throw a wrench in all your plans just to be cruel. The planets are asking us to take a pause — to spend some time retracing our recent steps, checking our work, smoothing out any errors before we get in too deep.

If we want to grow in the ways that are right for us, we need to take breathers every once in a while and make sure we're on track. This is exactly the kind of energy that retrogrades offer up to us. Although remember: Not all planetary retrogrades are made equal. We're going to feel the effects of the inner planets' retrogrades much more so than the outer planets, so those are the ones to pay closer attention to. These are absolutely necessary check-ins that we all need to take advantage of rather than try to work against. And sure, they don't always come at opportune times, but once the planets have spoken it'll behoove us to listen. They have our greatest good in mind, star babies!

That all said, let's take a lil' backspin of our own through the many retrogrades of 2018. Each of them had their own silver platter's worth of life lessons and growth opportunities, so it's important to focus on how they've served us. No one's saying it was easy, but you know what? We've survived all of them so far, and dare I say we may even be thriving. Bustle spoke with astrologer Lisa Stardust to get some additional insights, so here's a review of every planet that went retrograde in 2018 and exactly what we've learned.

Mercury, planet of communication, technology, everyday travel, and information sharing, is perhaps best known for its pesky retrograde periods. This is probably because they happen relatively frequently — three or four times per year. We also super feel these retrogrades because the areas of our lives that Mercury governs are so important to our day-to-day grind (communication, technology, short trips). 2018 served us up three Mercury retrograde periods — one in March, one in July, and one in November.

What we learned: "Mercury Retrograde gave us the opportunity to redo, review, replay, and replan travel and communication — giving us a new perspective on truths we have uncovered," Stardust shares with Bustle. 2018 definitely taught us to cross our T's and dot our I's when it comes to planning and traveling, and also helped us refine exactly how we communicate and share our thoughts. Let's just say after this year, I won't be sending a text message without proof reading it, like, at least 12 times ever again.

Ah, lovely Venus: Planet of love, romance, pleasure, and beauty. We love her, she loves us, but Venus retrograde 2018 went down from Oct. 5 through Nov. 16, and shook things up in our love lives, financial lives, and creative lives alike, making us a bit more impulsive than usual. Of course, retrogrades are not the time for impulsive action, but rather for thoughtful reflection, so we had to exert some major self-control to review our life's Venus-ruled areas without making some rash decisions.

What we learned: Venus retrograde is an ideal time to figure out how to effectively practice self-love — and 2018's Rx in particular gave us a chance to realign ourselves with passionate creative projects, as well. "Venus Retrograde offered our hearts and wallets a chance to reset, giving us clarity into love and financial matters," explains Stardust to Bustle. Hopefully we all came out of the other side of this retrograde seeing things a lot more clearly when it came to all Venusian matters.

Hot n' fiery Mars: Planet of action, sex, and even war. Mars is all about leadership and go-getting, so Mars retrograde periods (which we experienced from June 26 through Aug. 27 this year) can be super frustrating. "When Mars is in retrograde we may instead find ourselves in turmoil, frustrated by the lack of forward movement," explained Astrology.com. And as described by Astrology King, "Mars retrograde is a time for thinking before acting," so it asks us to use all our will power to not let our blood boil and cause us to lash out with naughty Mars vices.

What we learned: Well, after a boatload of sexual tension-turned-frustration and hopefully a sprinkle of self-control, 2018's Mars retrograde taught us to assert ourselves without resorting to typical sharp Mars-influenced means — meaning we had to learn to share our truth using words and ideas instead of fire. As Stardust explains, "Mars Retrograde pushed us to assert ourselves without aggression, giving us the chance to use our words and actions carefully."

Good ol' Jupiter: The giant, much-beloved, good-vibes-galore planet of luck and expansion that everyone wants to be close to. But it's not all fun and games, as Jupiter retrograde 2018 began on March 8 and ran through July 10. "Jupiter retrograde represents a time of philosophical or spiritual introspection and reflection," explained Astrology King. "You will have to deal with particular issues involving growth and development, happiness and success." Jupiter is the planet of expansion, after all, so its retrogrades offer a time to focus on the areas in which you need to grow.

What we learned: "Jupiter Retrograde forced us to see defined truths and allowed us to gain wisdom on matters," shared Stardust with Bustle. This backspin was a time to cleanse out the toxic crap that was inhibiting us from growing in a healthy way — both spiritually and physically. We learned how to take better care of our physical bodies, our spiritual health, and how to better identify the areas we want to foster and boost up as far as our goals go.

Everyone knows Saturn doesn't come to play. This stern, paternal planet is full of tough love and harsh life lessons, so as you can imagine, a Saturn retrograde can be rocky. "Saturn is the Lord of Karma. Retrograde motion is a time when karma is sorted out. Therefore, Saturn retrograde is a double dose of karma," explained Astrology King. We experienced it for ourselves in 2018 from April 17 through Sep. 6, and it put all of our responsibilities to the test.

What we learned: "Saturn Retrograde gave us clarity on who or what we want to commit to and how," explains Stardust. "Also, [it] allowed us to start planning for the future." This planet is tough on us out of love, so its retrograde in 2018 was a good time to make sure we were laying out a solid foundation for ourselves — one that wouldn't crumble later on under pressure. It also helped us get a better idea of what responsibilities we truly were (or weren't) ready for.

Uranus is the super unique, independent, trailblazing weirdo planet that we love. "Uranus retrograde makes it harder to be yourself without causing distress to yourself or others," explained Astrology King, and that can be frustrating given that Uranus is all about individual expression. Uranus retrograde 2018 began on Aug. 7 and will actually rage on through January 2019 — meaning that we're actually still learning the lessons it has to offer and haven't quite made it out the other side yet.

What we learned: "Uranus Retrograde forced us to infernally analyze how we can assert our individuality within relationships, (while Uranus moonwalks from Taurus to Aries)," Stardust tells Bustle. Change is definitely a-brewin' here, and we should be learning to re-evaluate our relationship to materials, other people, and ourselves. As Astrology King advised, "Open mindedness and flexibility will lead to creative breakthroughs and a reinvigorated personal life," so let's keep truckin'.

Dreamy, ethereal Neptune, planet of illusion and fantasy, served us up a Neptune retrograde from June 18 through Nov. 24. "Neptune retrograde is the ideal time for spiritual self-development," explained Astrology King, which notes that its particular aspects "make Neptune retrograde 2018 especially good for undertaking a spiritual quest to seek the truth." Hard truths definitely have potential to come through here, but that's all in the name of a good retrograde, right?

What we learned: "Neptune Retrograde shattered illusions others have told us, also shed light on personal delusions, allowing us to see ourselves and others clearly," shares Stardust. This retrograde allowed us to get deep and dig beneath the fantasy that sometimes shields us from the truth. It hopefully helped us grow spiritually, too, clearing out excess psychic baggage that held us back from our honest visions.

Ooh, the dark and mysterious Pluto, planet of transformations, sex and rebirth, and the deep dark of your subconscious. 2018's Pluto retrograde, which went down from April. 22 through Sep. 30, served us lessons about power, control. "If you have been too controlling of others or situations then it is time to let go," wrote Astrology King. "This is not a time for power tripping but a time for elimination."

What we learned: A transformative time indeed, this outer planet's retrograde still had the power to deeply affect us, essentially taking us from worm to butterfly in one fell, retrograde swoop. "Pluto Retrograde allowed us to dig deep within our subconscious ... transforming our psychological emotions," explains Stardust to Bustle. The work was deep and inward, but it helped us grow stronger at the core of ourselves, our subconscious, and our karma.

More like this
The Best Self-Care Strategy For Your Zodiac Sign
By Marilyn La Jeunesse
These Are The 3 Most Mellow Zodiac Signs
By Kristine Fellizar
The Moon Tarot Card Wants You To Seek Clarity
By Nina Kahn
Here’s Your Daily Horoscope For November 30, 2022
By Mecca Woods
Get Even More From Bustle — Sign Up For The Newsletter