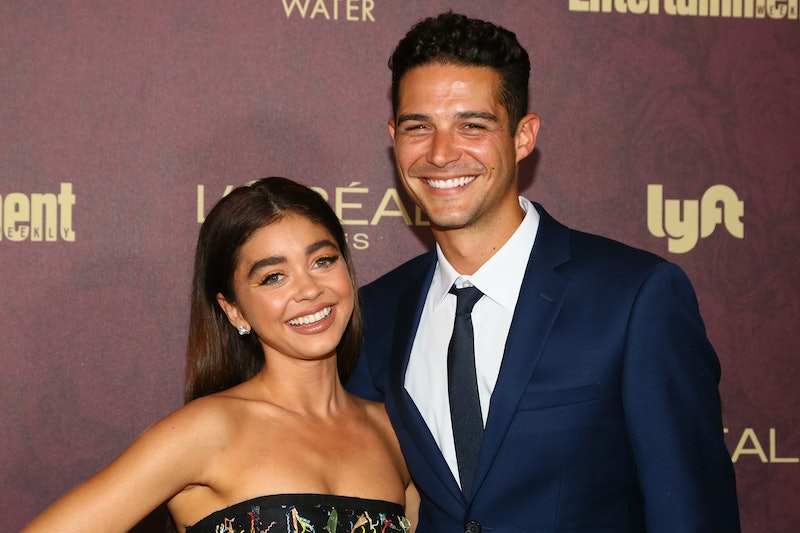 When it comes to Bachelor and Bachelorette suitors dating after appearing on one or more of the reality shows, it's not uncommon to hear about them seeing a fellow former contestant. That's why it was so surprising when Wells Adams started dating Sarah Hyland. No offense to any reality TV stars, but Hyland is a real celebrity — with a big hit sitcom and everything.

OK, I guess a lot of reality stars are real celebrities at this point, but as an actor, Hyland is a celebrity in a more traditional sense. I mean, she has four — deep breath — Screen Actors Guild Awards for Outstanding Performance by an Ensemble in a Comedy Series. So, how do an actor on a beloved ABC sitcom and a contestant from a beloved ABC reality series start dating? Surprisingly, not by meeting at an ABC event.

The newly engaged couple started dating in the fall of 2017, and they got together in a very 2010s way. After flirting on Twitter for a while, Adams slid into her DMs. Hyland told the story on Jimmy Kimmel Live! in January 2018.

"Have you seen those memes of 'slide in to the DMs'? That. He slid into my DMs," she explained. "We had tweeted each other because I thought he was funny and a fan of the show. So, I saw him as the bartender [on Bachelor in Paradise] and I was like, that's really cute." After some back and forth, he DM'd her and said, "Next time you're in LA, I'm taking you out for drinks and tacos." Hyland liked his confidence and liked tacos, so things ended up working out. Simple as that.

Adams also commented on them meeting online when he appeared on The Morning Breath web series in November 2017, as reported by People. And when asked for confirmation of them dating, he said, "There’s nothing really to say," he told the hosts. "Like, if you want to know — to be fair, if you want to know anything, just look on my social media."

And he's right. You can see the beginning of his relationship with his now-fiancée on Twitter. In fact, you can trace things back pretty far, because Hyland was into Adams way back in 2016 when he was a contestant on JoJo Fletcher's season of The Bachelorette:

And when he debuted as the bartender for Bachelor in Paradise Season 4, that's when things took off between the two:

Since then, Hyland and Adams have had plenty of fun times together — like wearing couples Halloween costumes — and gone through tough times, especially when it comes to Hyland's health. Right when they started dating, she had her second kidney transplant to treat her kidney dysplasia. "It definitely set a tone of: this is my life. If you can handle the fire, great. If you can’t, goodbye," she told People in April.

He could handle the fire. After being together for nearly two years, the couple got engaged in July when he proposed on a beach. Hey, they might have met in the DMs, but it's working out great for them. It's kind of inspiring. If you have a crush on someone, maybe you should just tell them. They just might want to take you out for tacos, too.