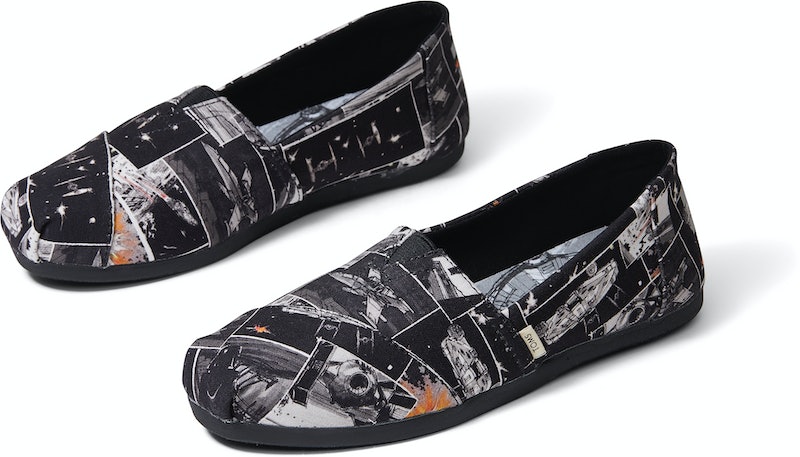 While the first phase of the Marvel Universe may have come to an end with Avenger's: Endgame, there's another massive movie franchise that's still got some time before it ends. A major shoe brand is helping fans bid farewell. The new TOMS x Star Wars shoes are the stylish way to wear the force on your feet, and while the final film in the latest trilogy doesn't hit theaters for a minute, there's no time like the present to prepare for that day.

The new collection from TOMS takes some of the film franchise's most famous moments and places them on their classic, canvas slip-ons. From the battle on Hoth to the destruction of the Death Star and even a Wookie print, the collection is perfect for long time fans of the series as well as new found fans of the J.J. Abrams directed films that began back in 2015.

Despite the final film, The Rise of Skywalker, in the Abrams helmed saga not making its theatrical debut until later this year during the holiday season, TOMS is launching the new Star Wars collection on July 1 which means you've got no excuse not to rock your Wookie-covered slip-ons to the midnight premiere.

As for the prices, you can expect to pay between $34.95 and $94.95 for the shoes. The collection also features shoes in sizes for the whole family, including kids. Whether you want to shop the new TOMS x Star Wars collection for yourself or for members of your family, there's plenty of sizes to go around. You can shop the new kicks both online at the TOMS website or in select stores that carry the brand.

If you're curious about whether or not the Toms One for One initiative will apply to the Star Wars collection, don't worry. When you buy a pair from the TOMS x Stars Wars collection, a pair of shoes will still be donated right alongside your purchase.

As for the prints in the collection, there are some seriously great options for fans of the franchise.

The battle on Hoth is one of the most iconic scenes from Star Wars: The Empire Strikes Back. It's the moment that Luke topples an AT-AT on the ice planet, and now you can rock that moment on your shoes.

Destruction of the Death Star

Another iconic moment depicted in the TOMS x Star Wars collection is the destruction of the Death Star. Not only is the moment famous, but it appears as though Rey, Finn, and Poe may be visiting the remains of the famous ship in The Rise of Skywalker.

The next pair shows a battle in space between Empire tie-fighters and Rebel Alliance X-wing ships as well as the famous Millennium Falcon.

Finally, there's the character print lace-up sneaker. Featuring everyone from Chewbacca to Boba Fett to C3PO, R2-D2, and Darth Vader, these are perfect for a lover of every character in the film franchise.

If you want to get your hands on the new TOMS x Star Wars collection, mark your calendar for July 1. Get ready to wear the force on your feet, and don't forget your lightsaber.