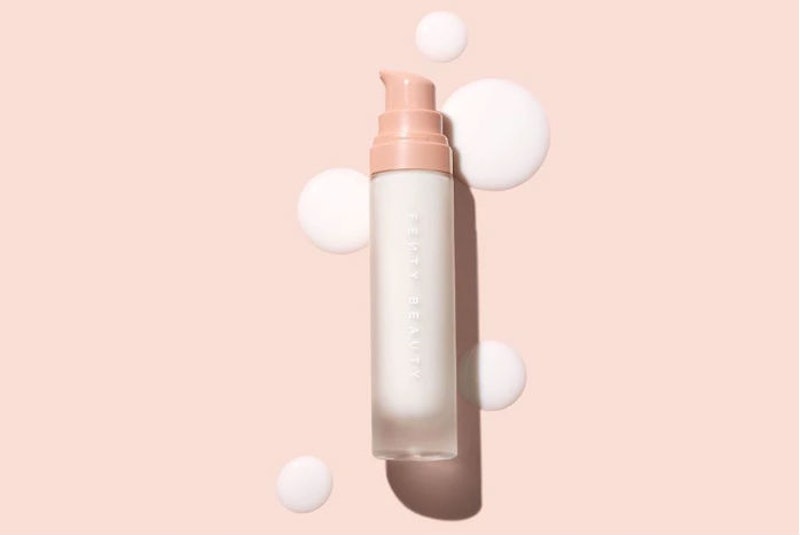 Rihanna is having a big year, but then again, when is she not having a big year? The singer, actor, designer, and makeup mogul has launched a luxury fashion label, covered magazines, and now, Fenty Beauty's Mattifying Primer is launching adding yet another release for her eponymous beauty brand. Clearly, Rihanna is a busy woman, but that's great news for her fans.

If you're already a fan of Fenty Beauty's complexion products, you likely are aware that the brand currently has a primer. In fact, it was one of the brand's very first launches. The Instant Retouch Primer is a shine controlling, pore filling primer, but the brand's new Pro Filt'r Mattifying Primer takes things a step further in the skin control arena.

According to a press release from the brand, the primer is set to launch on Aug. 15 and is meant to help makeup lovers survive summer. The new primer has the same texture as the brand's original, but it's made with blue agave extract and blurring powders. Yes, there are powders in this primer. However, according to the brand, you don't need to worry about the primer changing your skin tone. It blends invisibly into the skin and won't cause tightening or dryness.

As for the price, the new Pro Filt'r Mattifying Primer is set to retail for $32, the same amount as the original Retouch Primer. Even if you aren't oily all over your face, the brand recommends in a press release to simply use the more mattifying primer in the T-zone and other areas that may get a bit more oily in the summer.

The new Fenty primer isn't the brand's only launch this summer, though. The brand has already released an incredible collection of vivid liners and lippies for summer. Fenty's Getting Hotter collection featured an all new lip formula in its Poutsicle. The lippies feature a more nourishing formula that still packed with color. Poutsicle features bright hues in everything from hot pink to to neon blue.

Alongside the new lipsticks, Fenty Beauty also released new eyeliner trios are part of the collection. Like Poutsicle, the Vivid Eyeliner trios are, well, vivid. Coming in packs of three with colors like neon green, fuchsia, and bright white, the liners are perfect for adding a pop of color to your makeup look.

On top of launching multiple products for Fenty Beauty (including the new primer), Rihanna also casually dropped her luxury fashion label, Fenty. Couple that launch with her existing Savage X Fenty range, and her acting career (her film Guava Island just came out in April), and summer 2019 has already been Rihanna's season.

Rihanna has already conquered this summer, but there's now more coming to fans because she's a generous goddess. The new Fenty Pro Filt'r Mattifying Primer is set to launch Aug. 15 in Sephora and at Fenty Beauty's website. If you've been experiencing some ultra shiny forehead moments, the beauty mogul's got you. Mark your calendar and get ready to shop.