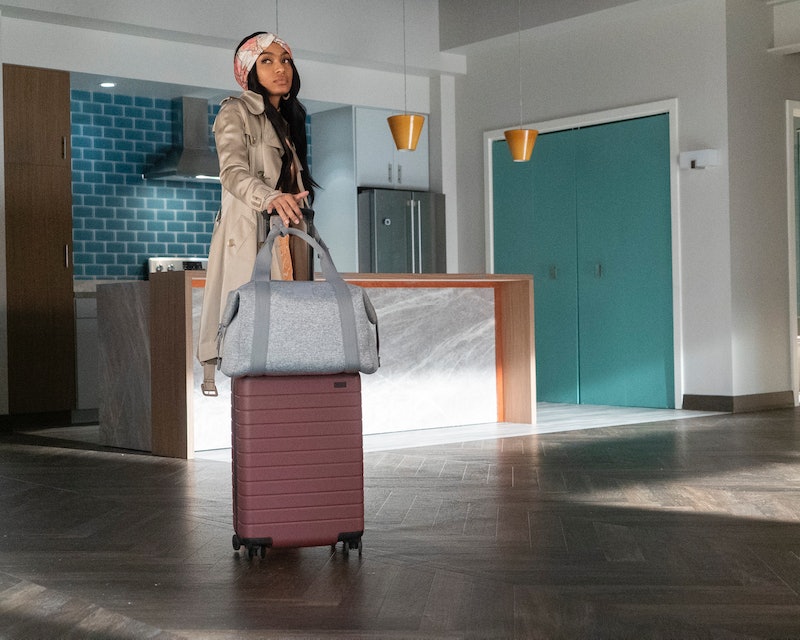 Goodbyes are never easy, and Zoey Johnson (Yara Shahidi) is preparing to say some of her own on Freeform's grown-ish, whose second season draws to a close on Wednesday, Aug. 7. Fortunately, fans already know that grown-ish will return for Season 3, but the premiere date is still undetermined. The series renewal was announced at the Television Critics Association Winter Press Tour in February 2019, per Deadline.

So far, in its run, grown-ish has tackled storylines like Zoey choosing Luca out of her love rectangle with him, Aaron, and Cash. Furthermore, the fashion student has gotten an internship at Teen Vogue (where she got in trouble for accidentally sharing some confidential info online), misused Adderall and learned from it, and cheated on her chemistry final (which got her probation), among other hijinx. As for her friends, Nomi has had a controversial relationship with her professor as well as come out to her parents as bisexual.

Through her college experiences, Zoey's been learning about the world and forming her own worldview. "I appreciate the ability to watch her grow and mess up," Shahidi told Refinery29, referring to her grown-ish character. "And this says nothing about her as a human, it says nothing about her possibilities. It just says something about, like, the fact that she's a 19-year-old young woman growing into this world."

In addition to grown-ish, there's slated to be a third series in the black-ish universe called mixed-ish, which premieres this September, per ABC. The series is a prequel set in the '80s and follows Rainbow Johnson's (Tracee Ellis Ross) childhood as a mixed-race kid.

While there's no official premiere date for grown-ish Season 3, Deadline stated on July 8, 2019, that production had started that day for the Freeform show's newest season. Furthermore, the article announced that Star actor Ryan Destiny would be joining the grown-ish cast. Since Seasons 1 and 2 have premiered in January 2018 and 2019, respectively, fans can reasonably assume that Zoey will dive into her junior year come early 2020.

Furthermore, Shahidi has a lot on her plate right now. Not only did she just appear in The Sun Is Also a Star alongside Riverdale's Charles Melton, but she's become incredibly politically active. Not only is she currently attending college herself (much like her grown-ish character), but she founded Eighteen x 18, which seeks to educate first-time voters, per their website.

"I describe my future as being policy-adjacent. I would like to be next to Capitol Hill but not on it," she told Refinery29 in the same interview. "The major I'm doing at [school] is called social studies. It's an interdisciplinary, socio-economic, philosophy and anthropology major, and African-American studies as my second major."

But thankfully, grown-ish fans can rest assured that Zoey and company will be coming back — this time as juniors.