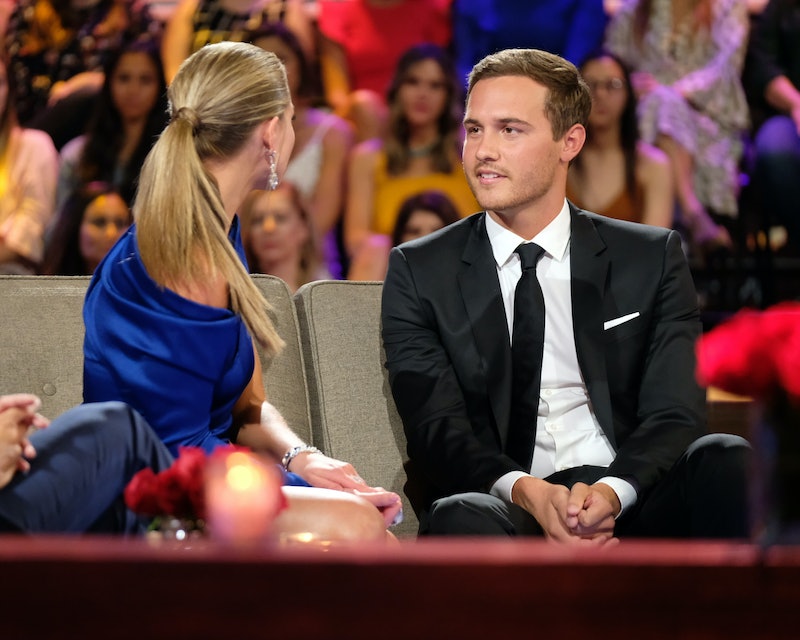 Now that the couples in Paradise have found love — lasting or otherwise — it's time for a brand new Bachelor to get ready to hand out some roses of his own. At the Bachelor in Paradise reunion on Sept. 17, Peter's Bachelor premiere date was announced, so tune in on January 6, 2020 to watch the charming pilot finally find love.

Best known as "Pilot Pete" on Hannah Brown's season of The Bachelorette, Peter Weber received an enthusiastic response when he was announced as the new face of the franchise at the reunion. Getting a little emotional onstage, Peter revealed that he couldn't wait to start filming The Bachelor, telling the audience that he's ready to find love, and that he has faith that he can find true love on the ABC reality show.

While a large part of Bachelor Nation was rooting for Mike Johnson to become the new Bachelor, it seems like Peter was always the top choice for the show's producers. In August, E! News reported that "Pete was always the first pick but producers wanted to see how Paradise went with Mike. They love him but aren't sure if he is ready to carry a whole show."

Peter may not have gotten Hannah's final rose, but the 28-year-old pilot won fans over during his time on the show, especially after his now-infamous windmill date with the former beauty queen. Hannah revealed during her appearance on After the Final Rose that during that overnight fantasy suite date in Greece, the pair had sex not twice — as she originally claimed — but four times. Peter's parents, who were in the audience during Hannah's announcement, seemed happy for their son, which means that Bachelor Nation will definitely be looking forward to seeing how they react to the women vying for Peter's love on this season of The Bachelor.

"He's older, he has a career and he has a great backstory," the source explained to E! about what made Peter such a solid choice. "He can definitely carry a show."

In addition to making an impact with his windmill date, Peter established himself as a charming, romantic guy who Bachelor Nation will have no problem rooting for on his quest to find love. After all, Hannah described him as "the dream guy" and compared him to a Ken doll during their goodbye, which makes him seem like the perfect choice for this experience. And despite things not working out in his favor during his time on The Bachelorette, Peter's comments about his time on the show establish him as someone worth swooning over.

"I know this whole situation didn’t work out the way I was hoping, but Hannah truly showed me a different love than I had ever felt," he told People back in July. "I have more love to find," he said at the time about the possibility of becoming the next Bachelor. "I wouldn’t say no to trying it again because I know the experience works. And I'm hopeful that my person is right around the corner."

As the new Bachelor, it seems like Peter's person really is right around the corner — and fans can tune into The Bachelor starting on January 6 to see if he finally meets that person on the reality show.