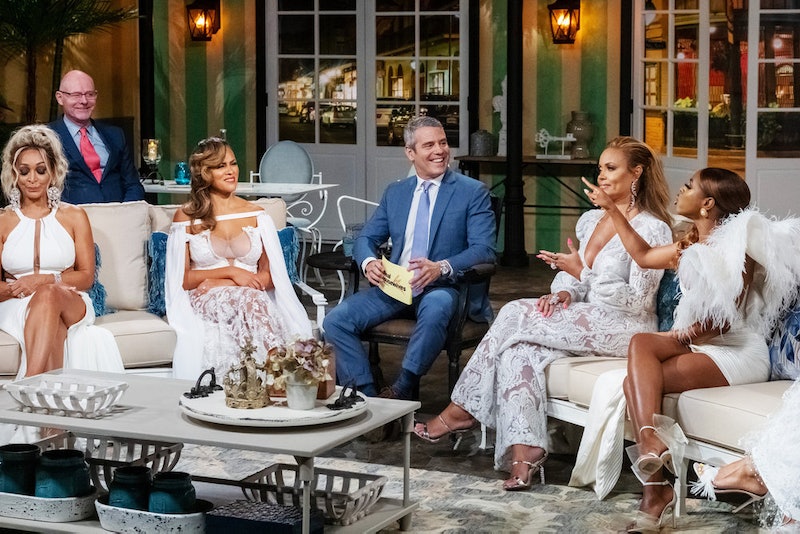 The Real Housewives of Potomac is one of the newer Bravo franchises, but it's already garnered a huge fanbase. Especially throughout the roller coaster of Season 4 — between the Katie Rost drama, the sexual assault allegations against Ashley Darby's husband Michael, and the tumultuous relationship between Candiace and her mom Dorothy, there was a lot to take in this year. Which brings us to perhaps the most important question of all: will RHOP come back for Season 5 and if so, when?

Despite the fact that Bravo hasn't officially announced the show's renewal, it seems safe to assume that we haven't seen the last of the RHOP ladies. To be fair, Bravo didn't actually confirm that the ladies of Potomac would be back for Season 4 until March 2019, about two months before the new episodes started airing. That means fans probably have a while to wait not only for a renewal announcement but for more of the ladies' drama-fueled antics on our screens.

So many big things happened this season that it feels impossible to pick a favorite moment. From the exploration of Candiace's toxic relationship with her mom Dorothy to Monique's pregnancy, there was no shortage of good stuff to dig into this year.

Such a dynamic season is sometimes a cause for concern — could next season possibly live up to this one? — but if anything, RHOP has proven that it has plenty of fodder for drama, promising almost an endless amount of catfights, gossip, backstabbing, and general over-the-top histrionics from a group of grown women who are surely too old for this behavior but don't seem to realize that, thank goodness.

It's hard to say what Season 5 of RHOP would look like. We'll likely get to see Monique in mommy mode with her new son Chase. Ashley also recently gave birth, which might give the two a chance to bond over the trials, tribulations, and joys of motherhood. The allegations against Ashley's husband Michael are still under investigation, and throughout the reunion, they were a topic of conversation. For her sake, the situation is hopefully resolved soon

There's a chance that the series may introduce a new cast member, even if it's just in a "friend" capacity, as was the case with Katie Rost, who caused so much uproar this season that she apparently wasn't even invited to the reunion. It takes a pretty big personality to get benched for a Bravo Real Housewives reunion, but Season 5 could definitely use a fresh face to help the stars move on from some of the old drama they continue to re-hash.

In any case, even though it hasn't been made official just yet, The Real Housewives of Potomac Season 5 is likely a foregone conclusion at this point. The only downside is having to wait so long for it to hit our screens.