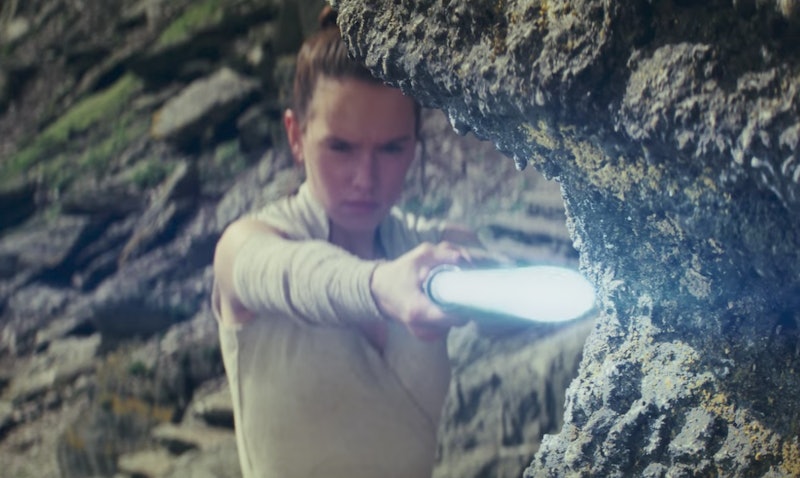 December is filled with so many reasons to gather your loved ones and celebrate life, and not just because of the holidays. I'm talking about the new Star Wars movie being released, and hey, maybe some people consider the Dec. 15 release of Star Wars: Episode VIII, The Last Jedi, a holiday in and of itself. For fans of the franchise, anticipation for The Last Jedi has been high for many months, but that's not all that the series has on its way. As it turns out, when the next Star Wars movie comes out after The Last Jedi is not all that far far away, in fact, so get pumped.

Even though The Last Jedi's imminent release should be enough Star Wars to tide fans over for a while, the next few movies are already in the works, and drumming up plenty of rumors. In September, it was announced that J.J. Abrams will direct Star Wars Episode IX, which is scheduled to come out Dec. 20, 2019. That's right, after this upcoming movie, everyone will only have to wait two years until the next Star Wars comes out. That is, if everything goes as planned, which it rarely does. Take the Han Solo spinoff movie, Solo, for example.

Back in June, before the Han Solo movie had its heavily-mocked title, the movie's directors, Phil Lord and Christopher Miller dropped out of while filming. As you can imagine, chaos ensued, but Ron Howard saved the day in a Han Solo-esque fashion, and the highly anticipated movie continued its filming. Solo stars Alden Ehrenreich as the titular character, along with Emilia Clarke, Donald Glover, Thandie Newton, and Woody Harrelson, and it's set to come out on May 25, 2018. That's only about six months after The Last Jedi's release, and it seems reason enough to scream like a porg from excitement.

In addition to Episode IX and the Han Solo spinoff, a third Star Wars movie is already in the works, according to The Hollywood Reporter. Last August, THR reported that an Obi-Wan Kenobi movie is in early talks, and though a deal has not yet been made, this could be the next installment to the ever-expanding Star Wars universe. The report also suggests that standalone movies featuring Yoda and Boba Fett could also become future spinoffs, though nothing is certain about them yet.

It's times like these that Star Wars fans probably wish they had Yoda's psychic powers to they could know which movies they might get in the future. Even without the potential spinoffs being officially announced, the upcoming Star Wars movies that have been confirmed are likely exciting enough for anyone who enjoys watching lightsaber matches and Jedi shenanigans.

Whether or not the nine Star Wars movies that follow the same storyline will continue beyond 2019 has also not yet been determined. In early Dec. actor Daisy Ridley, who plays Rey, shocked fans by suggesting that her character might not continue beyond Episode IX. In an interview with with Rolling Stone, after the actor was asked if she would appear in more than three Star Wars movies, she said, "No, no, no." She went on to say, "I am really, really excited to do the third thing and round it out, because ultimately, what I was signing on to was three films. So in my head, it's three films. I think it will feel like the right time to round it out."

Of course, for fans who enjoy watching Ridley's character Rey, the idea that they might say goodbye to her character — and so soon — is heartbreaking. Over the weekend, the actor spoke to ET to clarify her comments after they caused an outcry. "That was end of a very long day, at the end of a very long shoot. It was pouring down rain in Montreal," Ridley said. "We were talking about where the trilogy was going and… all I said was as far as I was concerned, when I signed on, I was signing onto [episodes] seven, eight and nine," she continued. The heroine then clarified that she knows as much as fans do, saying, "I don't know about any plans beyond [Episode IX]. That's for Disney, that's for everyone else in charge to decide."

The future of Rey and the entire Star Wars may be uncertain in many ways, but at least the next two years promises the release of two, if not three, new movies. For now, Star Wars lovers should probably just focus on this month's release of The Last Jedi and go from there.