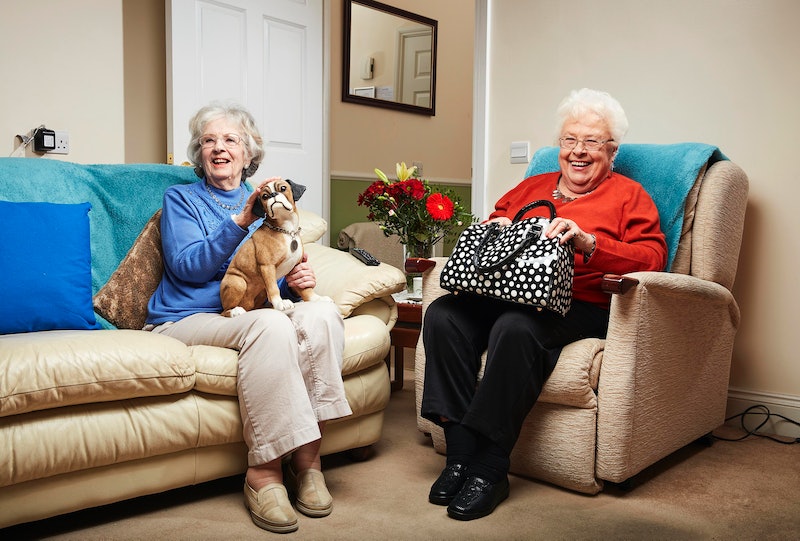 Do you ever find yourself saying "I wish I'd thought of that" when watching a TV show with an effing brilliant concept? Yeah, me too. Well, whoever thought of making a fly-on-the-wall TV show about people watching TV shows was a total genius, and may just be responsible for some of the most joyful viewing around. And, the amazing thing is, the show is SO up to date with what's currently on British telly. So when exactly is Gogglebox filmed?

Well, the reason the programmes discussed on Channel 4's hit show are so up to date is because each episode of Gogglebox is filmed the same week it airs, the Radio Times reports. Speaking to the Radio Times about the process of filming Gogglebox, creator Tania Alexander said: "It had to be the week’s television ... We weren’t going to do this show on the month’s television or the year’s television — it had to be the week so it’s quite extraordinary that we can bring something to a Friday night that actually sometimes went out the night before." Boy, that sounds stressful.

So, yes, the families on Gogglebox actually watch the TV shows we watch at the same time we watch them. And, yes, they are paid to do this. And, no, I don't know why this isn't your job.

Anyway, I guess you are also wondering how the whole filming bit works. Like, is there a massive crew in the room filming the families' every reaction, comment, emotion? Well the answer to that is a little bit complicated.

The Gogglebox production team uses two remote cameras in each living room, the Radio Times reveals, which affords them the ability to be out of the way so the families involved can have a more natural viewing experience and create all that TV magic. One of the cameras is fixed, and one is a roaming camera. The roaming camera is there for close ups on all the good stuff like sassy one liners, eye brow raises, and, of course, tears.

So, this roaming camera obviously needs to be operated by a team. In order to sort this, each household has its very own control room, which can be any space in the house and, if there is no space out of earshot, the Gogglebox gods can provide a production van. They film in each house for two nights. According to the Radio Times, editing begins on a Tuesday, with the final cut turning up at Channel 4 on the Thursday (if all goes to plan), and the show being transmitted on the Friday.

Gogglebox is now entering it 13th season, which seems pretty mad, especially considering that its popularity has not waned. The cast has changed over the years, but, every season, Channel 4 knows exactly how to pick the most hilarious and heart-warming people who keep us entertained throughout.

The show has changed the lives of many of its subjects, with one stand-out star in particular going on to have huge success after she left Gogglebox. Scarlett Moffatt is now a well-known TV personality, reality TV star, and even a pretty brilliant TV host herself. The start she got in Gogglebox has literally transformed her life and the life of those around her. She was even able to pay off her parents' mortgage, Metro reports.

Make sure you tune into the latest season of Gogglebox for your fill of gasps, jumps, witty commentary, and, above all, LOLs.