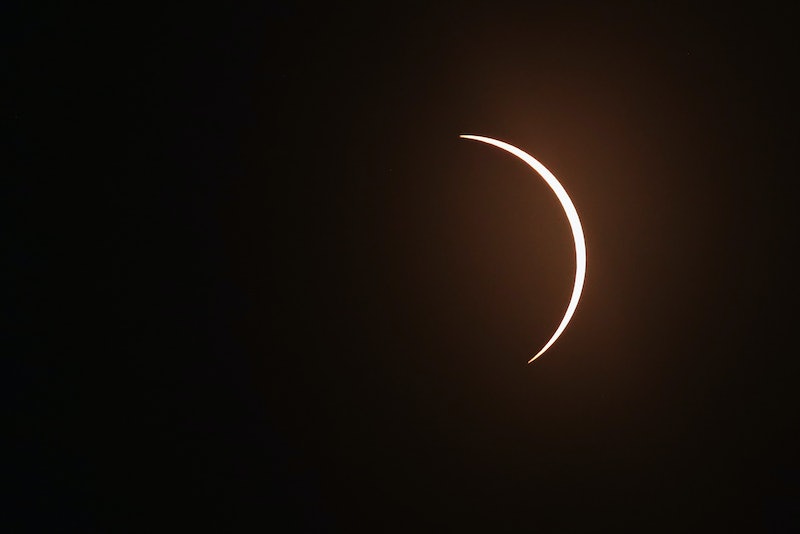 This summer has been full of fascinating astronomical events, from a total lunar eclipse at the end of July to the fact that five planets are currently in a retrograde period at this very moment. It doesn't look like it's ending any time soon, either. Just like any other month, August features a new moon, the start of a fresh new cycle and the end of the old one. This new moon isn't just like any other new moon, though: it's a super new moon, and there's going to be a lot happening that you're definitely going to want to be aware of. So when is August's super new moon? It's coming up sooner than you'd think!

As the moon orbits around earth, it goes through phases. According to MoonGiant, it takes the moon 29.53 days to orbit completely around the Earth in a full lunar cycle. These phases change the light all around us and also the appearance of the moon for us here on Earth. This is why on certain days, you might notice that the moon looks like a tiny sliver, and on other days, much more like a full circle.

The four main moon phases in order are the new moon, first quarter moon, full moon, and last quarter moon. The new moon is recognizable because the moon is completely dark with zero-percent luminosity. This month's new moon falls on Saturday, August 11, and it just so happens to also be a partial solar eclipse. This happens when the new moon, the sun, and the Earth don't align in a straight line and the moon casts a shadow on the sun. A solar eclipse is generally more powerful than a "regular" new moon because the moon is darkening the sun. Because it's a partial solar eclipse, the sun will still be visible, with the moon only darkening a portion of it.

The partial solar eclipse will be visible during the day on August 11, as the new moon rises and begins to peek through, covering part of the sun. It will be most visible to anyone in North/East Europe, North/West Asia, North in North America, and the Arctic. It should last around three and a half hours, starting at sunrise in northeastern North America and ending at sunset on the Asian Pacific Coast.

The August new moon will definitely affect you — new moons are generally thought of as the best time to start something new and to make a fresh start. As Astrology King says, the influence of a new moon lasts about four weeks — but the influence of a solar eclipse can last about six months. That's a pretty big difference!

This super new moon will be a balancing act for everyone, thanks to the energy from the moon and the effects of Mercury retrograde. While the moon will make you want to dive into something new and have a fresh start, Mercury retrograde is going to be causing mishaps with communication, which isn't ideal when you're doing something new. Your best bet is to try to be as patient as possible... and maybe wait until the end of the month to give in and start something new.