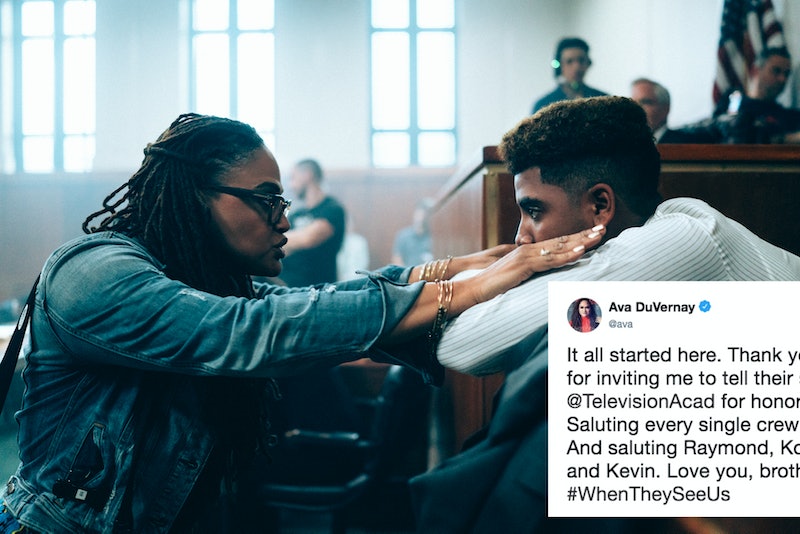 On the day the 71st annual Emmy nominations were announced, one director expressed her gratitude for the project that garnered her 16 nominations. Ava DuVernay thanked the Exonerated Five, formerly known as the Central Park Five, in the wake of a flurry of Emmy nominations for the powerful limited series based on their experience. When They See Us dropped on Netflix on May 31, and the series tells the true story of five teenage Black and Latinx boys, who were falsely arrested for rape in 1989 before being exonerated in 2002.

With its 16 nominations, When They See Us garnered the most nods of any single project for streaming giant Netflix this year. DuVernay — who received recognition for producing, directing, and co-writing the limited series — paid homage to the roots of When They See Us in her Emmys morning response.

The Selma filmmaker retweeted an April 2015 tweet from Raymond Santana, who makes up 1/5th of the exonerated men, which is pinned to his Twitter account. It reads, ".@AVAETC what's your next film gonna be on?? #thecentralparkfive #cp5 #centralpark5 maybe???? #wishfulthinking #fingerscrossed." In response to the throwback tweet, DuVernay wrote:

"It all started here. Thank you to the real men for inviting me to tell their story. Thank you @TelevisionAcad for honoring the work. Saluting every single crew and cast member. And saluting Raymond, Korey, Antron, Yusef and Kevin. Love you, brothers. #WhenTheySeeUs."

It seems that original tweet from Santana sparked major inspiration for DuVernay, since that post resulted in the journeys of all five men — Antron McCray, Kevin Richardson, Yusef Salaam, Raymond Santana, and Korey Wise — being told in a visceral, impactful way. Actors Jharrel Jerome, Aunjanue Ellis, Niecy Nash, Asante Blackk, John Leguizamo, and Michael K. Williams were also recognized in acting categories for their work on the show, which Netflix revealed in late June had been watched by 23 million accounts worldwide since its release.

Reese Witherspoon, who appeared in DuVernay's 2018 film A Wrinkle in Time, was among the many who replied to DuVernay's tweet. She wrote, "So well deserved ! Congrats to the whole team !"

Asante Blackk, who played young Kevin Richardson in When They See Us, also took to Twitter with his excitement for the Emmys news, including his nod for Best Supporting Actor, TV Movie or Limited Series. He wrote, alongside a still from the show and a list of the nominees, "woke up to find out i'm nominated for an emmy. for my first ever project. at 17 years old. wow. i love y'all. thank you so much."

DuVernay has always kept the limited series centered on the real and tragic experiences it's based on. When Netflix revealed the news of the show's popularity, DuVernay shared the numbers in an emotional tweet, explaining,

"Imagine believing the world doesn't care about real stories of black people. It always made me sad. So when Netflix just shared with me that 23M+ accounts worldwide have watched #WhenTheySeeUs, I cried. Our stories matter and can move across the globe. A new truth for a new day."

While a second season for When They See Us isn't guaranteed, considering it was a limited series, fans can be assured of DuVernay's pride and respect for the real-life subjects at its Emmy-nominated center.

More like this
Here’s Everything Coming To & Leaving Netflix In February
By Jake Viswanath
Ozzie’s Coming Out Scene With Kitty On 'That ’90s Show' Has Twitter Sobbing
By Brad Witter
Ashton Kutcher Wants Danny Masterson “To Be Found Innocent” In Rape Retrial
By Jake Viswanath
'The Queen’s Gambit' Season 2 Tweet Wasn’t From Anya Taylor-Joy
By Mary Kate McGrath, Jack Irvin and Grace Wehniainen
Get Even More From Bustle — Sign Up For The Newsletter
From hair trends to relationship advice, our daily newsletter has everything you need to sound like a person who’s on TikTok, even if you aren’t.