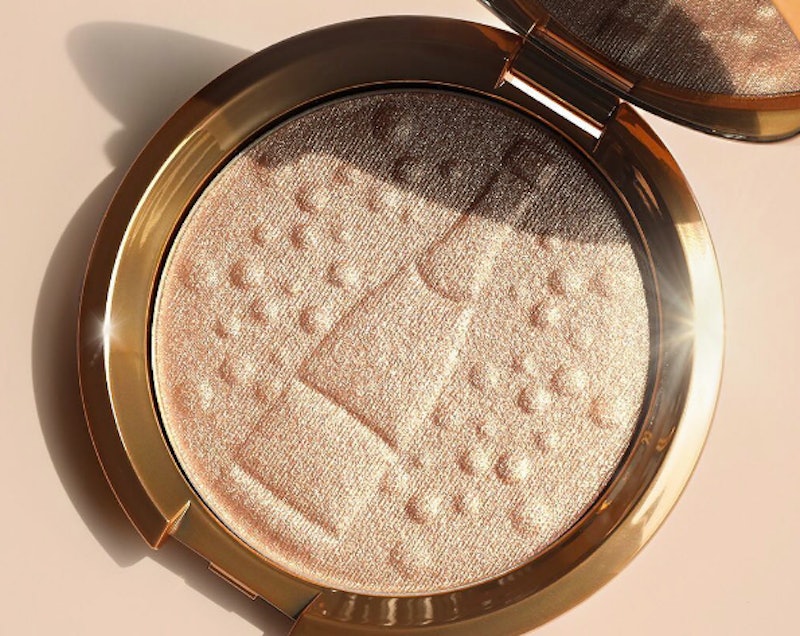 Believe it or not, it's been two years since the Becca x Jaclyn Hill Highlighter has hit the market, and they're making sure that everyone has a chance to celebrate. In honor of the anniversary, Becca created a Collectors Edition Champagne Pop. While the shade will stay the same, just about everything else is getting a update. Grab your wallets, because this launch will be here before you know it.

Champagne Pop has had an unusual upbringing. When Jaclyn Hill first created the shade for Becca, it was supposed to be limited edition. People loved it so much that the brand decided to make it a permanent shade. They even put it into a Glow Palette and made it into creme and liquid formulas. Now, two years later, it's getting yet another makeover. According to the Instagram post, the powder is printed with a champagne bottle and bubbles and housed in a golden pan.

If you're as excited as the rest of fans, you'll be happy to know that you don't have much longer to wait. The Collectors Edition Champagne Pop Highlighter will be available exclusively at Sephora online on June 10 and in-stores on June 15. Start scraping those pennies together, my friends, because you won't want to miss this launch.

The inside isn't the only part getting an update, either. Along with the new print and pan color, the box that it comes in is getting an update as well. According to Jaclyn Hill's Snapchat, the Collectors Edition Champagne Pop box will have a tiny little bottle with the YouTubers initials on it as well as her signature.

As of right now there's no word on how much the Collector's Edition Champagne Pop will cost. I'm willing to bet that the cost will be $38 — the same as the original product. Especially since, according to the social media images, the two pans are the same size. It's also worth noting that the new look will only come in the pressed powder formula.

Needless to say, fans are pretty excited about the relaunch, and for a good reason. If anyone wants to start a petition to make the champagne bottle print a permanent thing, I would definitely sign it.