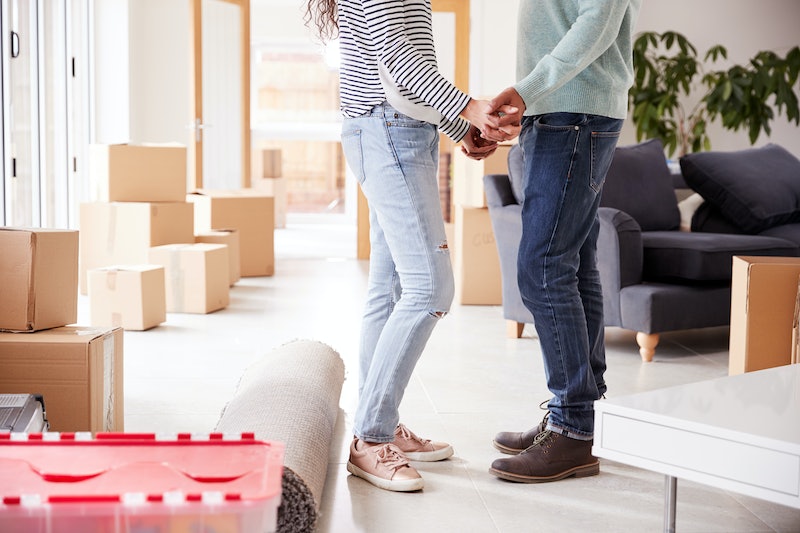 Deciding when to move in with a partner can be incredibly complicated. There's so many questions to consider first: Are we ready? Will we end up hating each other? Will I discover they have some gross habits that I never noticed before? It's a lot. And in times of trouble, some people (*cough* millennials *cough*) find turning to the stars can be helpful. If you think checking out when you should move in according to your Zodiac sign might be just what you need, then keep reading.

So, the research comes from the team over at sellhousefast.uk. As a part of the study, the property company looked at what each zodiac sign is a fan of, or not so much of a fan of. That combined with a fairly comprehensive look at their traits makes for some seriously interesting insight into when you should consider the big move, and even where you're moving into. All of which is certainly worth considering looking at if you might be making the move yourself. Or should I say, if you might be making the move with bae. Because according to the research, it's best to go by the interests and traits of the dominant person in the relationship.

So it turns out Aries will need to wait three whole years before considering cohabitation. "Aries are known to be very independent people," the study explains. "They are overly blunt and that can sometimes cause issues in their relationships with others." Um, bit harsh, but OK. So, basically, these guys think you're better off giving it time before making the big move.

Wow, so according to this research, Taureans move fast. "People under the Taurus sign like stability and are the anchors of the zodiac signs," the study says, "so perhaps it is no surprise that they would move in with their partners after just 3 months. As long as their partners are honest and don’t lose their trust, the relationship should work."

Right, so Geminis have a bit of a tricky one because, yes, they are super loving but, hey, they also have their heads screwed on. "'In love with love' is one way to describe a Gemini," the study says. "However, they won't dive head first into a huge commitment like sharing a house. They are highly intelligent, and they will wait until they find the right person to take things forward with."

Cancer is one of the signs that thrives most in a relationship. Meaning that time is absolutely of the essence. And what says YOLO more than ignoring societal norms and moving in within six months? "Cancers have a great intuition and they will know immediately when a person is right for them," the study explains.

According to the traits of a Leo, they're super fussy about those they like and those they don't. However, if they're in your corner, you've got a bae for life who'll always put you first. "Leos are very passionate and always put their partners' needs first," the study says. "They don’t like everybody, but if a Leo chooses you as a partner, you'll know they are truly fond of you."

According to the Zodiac, Virgos are slightly tricky in terms of their need to make sure everything is a certain way. Dare I say control freaks? So, letting someone in might take a little longer than usual. "Virgos are ... often perfectionists. They will not stop until something is done right. That's why it will take a while for them to let another person into their private space." Fair enough.

Librans, AKA the best sign (yes I'm a Libra... how did you know?), are especially keen to set some roots down. Because they know what they want. And what's wrong with that I hear you ask? That's right, absolutely nothing. "Libras think they are quite good at directing their own lives, so if they see themselves with you in the long run, it won't take them long to ask you to move in together."

So according to their traits, if you meet a Scorpio, things might actually move lightning speed. "Scorpios know what they want, and they want it now," the study tells us. "If you managed to penetrate their thick shells, you'll discover a loving and loyal person." Two months is mega first, but more power to them.

Having dated one myself, I can confirm that this is probably completely correct. Not the biggest fans of commitment are Sagittarians... "This sign is known for being very truthful, even if the truth will hurt the people around them, they don't feel the need to sugar-coat anything. This could cause trouble in their relationship and may cause them to lose relationships quickly."

Capricorns are kind of notoriously stubborn and unmoving. However, if you look at this from a different angle, it could be read as knowing exactly what they want. "Capricorns in fact just know what they want, and they will work hard to achieve it, whether it’s in their professional or private lives," the study says. "With a very corporate approach to love, they would sit down with a partner and discuss where the relationship is going."

Aquarius is a sign that really love independence. Especially when it comes to anything being labelled or feeling any sort of pressure. "They are very analytical so they will measure the pros and cons of living together before taking such a big step," the study explains.

Pisces is a slightly complex sign because despite being acutely in touch with what they want from the very beginning, they are also super into analysing absolutely everything. "Pisces is a deeply intuitive sign, so you would think they would know straight away if they are with the right person. However, their logical sides are also very evolved, so they will not rush into a decision just because their gut feeling says it’s right." Ah, so wise.

Which ever sign you are or you're dating, remember that moving in might seem exciting but is a huge commitment. One which might take a bit of the spark away. So make sure you really think it over and give each other enough time to grow together before you move in.