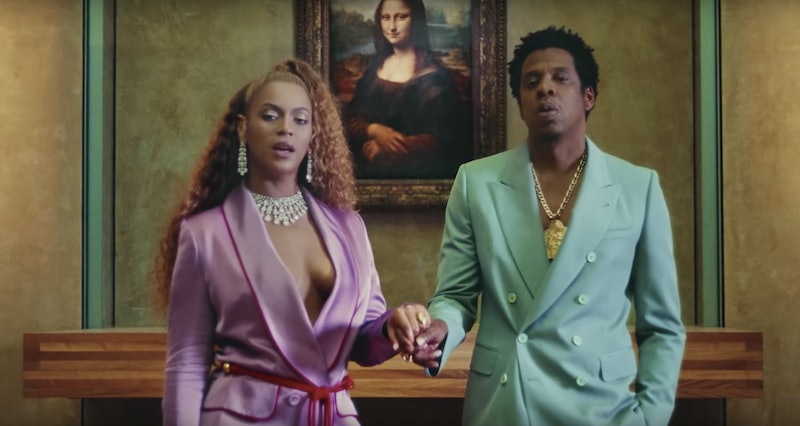 EARLIER: Beyoncé and JAY-Z shocked their fans on Saturday, June 16 by dropping a surprise album titled Everything is Love on TIDAL. That means the album is currently available for subscribers of the streaming service, but when will Everything is Love be on iTunes? Unfortunately, it might be a bit of a wait — but it does seem likely it'll hit iTunes eventually, especially if you consider the precedence these two have set with their music. (Bustle reached out to Apple regarding the album's iTunes availability, but did not receive an immediate response.)

While you might be understandably disappointed if you don't subscribe to TIDAL currently, there are a few things you could do in the meantime. That includes signing up for a TIDAL subscription (the premium subscription is $9.99/month), testing out the waters with a free TIDAL trial (if you haven't already used up that option), or watching the video for "APESH**T" on Bey's YouTube page. The 6-minute clip — which is actually more like a masterpiece — was filmed in the Louvre. It's stunning on multiple levels.

But OK, if you've already watched the video a dozen times and want the rest of Beyoncé and JAY-Z's full album to listen to and you're adamant about listening on iTunes, there is still hope that you won't have to wait forever to do so. Looking back at Bey and Jay's past album releases could help you estimate a time frame and plan accordingly.

The last time Beyoncé dropped a full album, it was the unforgettable Lemonade, which premiered via an HBO visual film and on TIDAL in 2016. (Let that sink in that we've had to wait two years for a Beyoncé album, so obviously this one feels like a long time coming.) According to a CNN article from that year, Lemonade exclusively streamed on TIDAL on a Saturday night, but by the following Monday morning — just days later — it was available on iTunes.

However, when JAY-Z's most recent album, 4:44, dropped last July, it took a full week before it became available on iTunes and Apple Music, according to a report from The FADER at the time. That means Jay's album's TIDAL exclusivity window was a bit longer than Bey's.

While there was a difference in just how long their TIDAL exclusives lasted, it still only came down to a matter of days. And most importantly, both albums made their way to iTunes and Apple Music eventually — it's just a matter of patience and keeping your eyes peeled for any sort of announcement. If following the pattern of Jay's last album, it could potentially appear by next Saturday, June 23.

Even though dropping albums exclusively on TIDAL has become a habit of the couple — and it's not all that surprising, given the fact that JAY-Z is heavily involved in the streaming company — that doesn't mean that fans haven't been a bit disappointed that they can't necessarily get their hands on the album right away. Just one look at Twitter, and you'll see plenty of people eager to stream in more than one way.

But let's try to look on the bright side: After a rocky time a few years back, it appears that JAY-Z and Beyoncé are reunited and stronger than ever. They're currently taking the world by storm on their On The Run II Tour. And now with this new album, they've got plenty to celebrate and perform for fans.

While the timing of the album may have come as a surprise, there have been whispers of a joint project for a while now. In his November 2017 interview with The New York Times' T Magazine, JAY-Z admitted a joint album was in the works and just how collaborative the process was. He said, "We were using our art almost like a therapy session. And we started making music together." It was in that same interview that Jay opened up about his infidelity that Beyoncé heavily hinted at in Lemonade.

Yes, these two have been through a lot, but they've clearly channeled it into their music. And if you want to hear what that sounds like, then now's a good time to head to TIDAL — or to cross your fingers for a speedy release on iTunes.