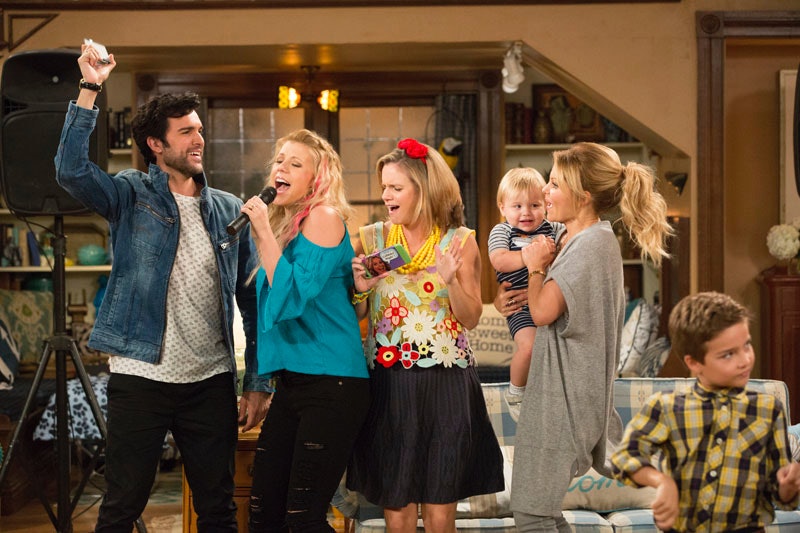 Just when you thought you'd opened all your Christmas presents this year, there's one thing left under the tree for you — the promise of a new season of Fuller House. So when will Fuller House Season 3 premiere? An exact release date hasn't been released yet by Netflix, but they have told fans it will be sometime in 2017, and by looking at how long the first two seasons took between announcement and release, I've been able to narrow it down to October 2017; it looks like a full season — or fuller season, I'm hilarious — takes between nine and 10 months to put together. UPDATE: Candace Cameron announced on Instagram that Season 3 will air on September 22.

EARLIER: And whenever I did math in school, my teachers always asked me to show my work, so let's do this. After months if not years of fans wishing, hoping, and speculating about a Full House reboot, producers finally confirmed that Fuller House had been greenlit on Apr. 21, 2015. Filming lasted four months, from July to November 2015, and a month after wrapping, Netflix announced the series' first release date: Feb. 26, 2016.

So the first season took 10 months (and five days!) between the start of production and completion, but the process for Season 2 was slightly more streamlined, now that everybody was getting a feel for things. Fuller House was renewed for a second season on Mar. 2, 2016, and production began just two months later, trimming a full month off the time between greenlighting and production seen on Season 1. This decision was presumably in order to capitalize on fan interest, as Fuller House star and executive producer John Stamos told E! News at the end of April:

I don't think they've announced the dates, but they're going to be a lot sooner than we released last year's. Last year we had a very fast prep time to get the scripts and stories done. This year we got ahead of it and I think, out of the 13 I feel like there's already like 10 scripts done.

And just as he'd promised, there were the completed Season 2 episodes, dropping in bulk on Dec. 9, 2016, nine months and seven days after the renewal was announced, not to mention a full month earlier than I had predicted in this post from March 2016. That's where trimming off that month of production really paid dividends.

And that brings us to Dec. 24, when Fuller House Season 3 was announced, officially starting the countdown to the next release date. So based on the production processes for Seasons 1 and 2, which took when can you expect Season 3 to drop? Purely based on math, and assuming nothing goes wildly differently this time around, Season 3 should be hitting Netflix midway through October 2017, just about nine-and-a-half months from the renewal announcement.

And if you want me to get even more specific, I'm talking Oct. 17, 2017, which is the day that I'm led to by averaging the production-length from Seasons 1 and 2. But since that's a Tuesday, and both seasons have been released on Fridays, I'm looking at either Oct. 13 or Oct. 20 for a Season 3 release. Oof. My brain hurts. Are you happy now, gentle readers? I did math for you during the holiday season. Math.

More like this
'Elite' Season 6 Is Arriving Sooner Than You Think
By Gretchen Smail and Grace Wehniainen
'The White Lotus' Season 2 Finally Has A Release Date
By Bustle Editors
'Ramy' Will “Probably” End With Season 4, According To Ramy Youssef
By Brad Witter
If 'Entergalactic' Season 2 Happens, You Could Get A New Kid Cudi Album
By Kadin Burnett
Get Even More From Bustle — Sign Up For The Newsletter