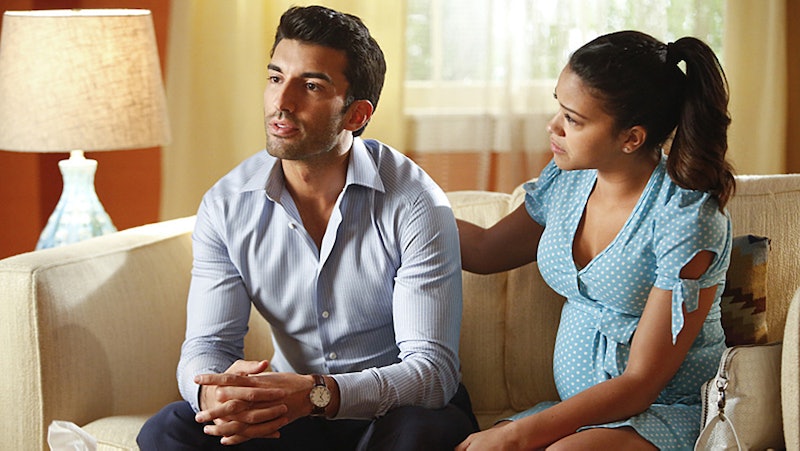 Last week's episode of Jane the Virgin will go down as one of (if not, the) most pivotal episode yet to air. Major Jane spoilers ahead. In Season 3's "Chapter 54" episode, our beloved Michael died. Those who have been an advocate of Jane and Michael's relationship probably let out an audible bellow when it happened, and surely, those who only recently got on board felt something filling up in their eyes. Wipe away that salt water quickly, Team Michael, as you gear up for a reprisal of Jane and Rafael's romance. Or, at least, prepare to fend off Jane and Rafael fans, who are already (probably) questioning when Jane and Rafael will get together again on Jane the Virgin. Need I remind them, Michael just died, OK?

The classic love triangle with Jane, Michael, and Rafael became no more when Michael and Jane finally said, "I do." But to Jane and Rafael hopefuls, there was always that slight possibility that something would change. And for those hopefuls who were paying particular attention to the ominous warnings from the Narrator, there was always that slight possibility Michael would see a terrible and untimely demise, and Rafael would be victorious. Harsh, but not false. I know these types of Rafael supporters are out there, but I'll say it again, Michael just died, OK?

I mean, for us he did. For the characters, it's been three years. Creator and showrunner Jennie Snyder Urman confirmed to Deadline that the time jump will definitely be happening. "We jump three years into the future. It’s pretty exciting for the show — every single character is in a new and unexpected place," she said. But, maybe not for Rafael. He might still be in the same place, i.e. behind bars. (When asked if Rafael was actually going to jail, Urman declared, "He sure is!")

Ostensibly, the only way these two will rekindle something is when Rafael gets out of prison. From Urman's answer, it sounds like he's still there when we pick up three years later. That's a pretty long time for their love to get cold, plus Jane's been dealing with grief and raising her son all alone. I doubt she has "fall back in love with Rafael ASAP" written on her to-do list.

However, after he gets out, there will always be the binding force of their son. Meaning, Jane and Rafael's relationship will persist as long as Mateo is in both of their lives. Until he becomes a legal adult, there's still a chance. Yeah, I'm telling you there's a chance! (Please read that in a Lloyd Christmas voice, thank you.) Still, the obvious truth remains: It's too soon to bring them back together, so don't hold your breath for a romantic reunion.

Urman hasn't confirmed or denied anything just yet, so we won't know until it happens. In fact, when questioned about Rafael and Jane, Urman simply said, "You’ll have to wait and see!" Which, I'm fine with. Need I remind you, Michael just died, OK? Have a little patience.