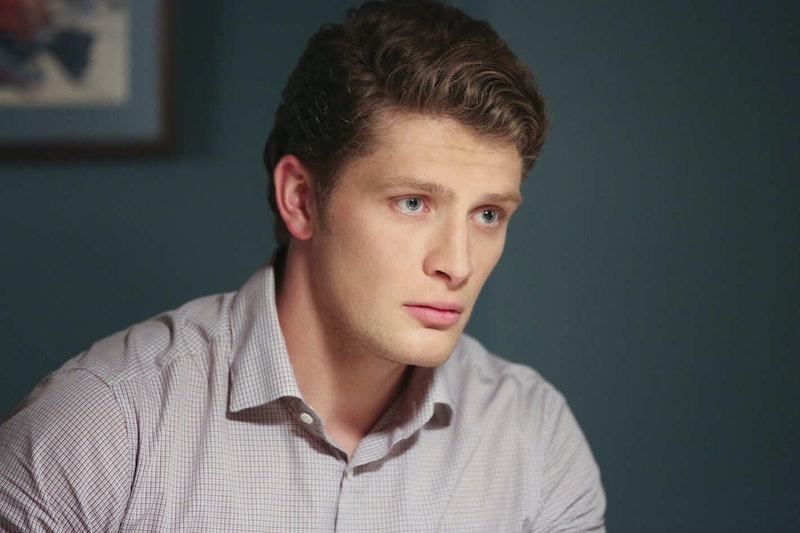 Major spoilers ahead for Jane the Virgin. I repeat, major spoilers. If you want to continue feeling happy today, click away. As the old adage goes, everything Michael must come to an end. In an unsettling, crushing turn of events, Brett Dier's character Michael Cordero has died on Jane The Virgin. But will this be the last we ever see of dear Michael? Or will Dier be back?

Michael didn't die because he get shot by some maniac at his wedding. He didn't die because, while on the hospital bed, that same maniac came in and shot him again. He died taking the LSATs. Jane the Virgin pulled off Michael's death in the most surprising way it knew how — by making it unremarkable. He just fell down, and then he was gone. (No, you're crying.)

As the reality of the situation sets in, fans are left wondering whether or not Michael's fate has been completely sealed. The preview for next episode is one indicator that it has, and showrunner Jennie Snyder Urman's letter to fans on Tumblr is another confirmation. But, thanks to the magic of flashbacks and fantasy sequences, it's possible that Dier will return to Jane the Virgin. He just won't be rising from the dead or coming out of a coma or turning into a vampire — though that would be a welcome twist.

Urman thinks it's so possible, in fact, that she told The Hollywood Reporter that they will "definitely, definitely bringing Brett back." You can exhale now. She continued,

Painful as it might be to see Michael go, the move was a smart one. It came out of nowhere (even if some attest that there were multiple hints Michael that would die soon). It shakes the foundation of Jane's current stability as a character. After all, you don't sit down to watch a telenovela for all the happy endings and simple plot lines. As Urman said in her Tumblr letter, "This is a telenovela, as we so frequently remind you." In retrospect, Michael's death not only makes sense; it feels (sadly) necessary for the show to continue its legacy.

The three year time jump adds another compelling layer, but, more importantly, it makes space for Michael's return. As Urman wrote, "We’ll be flashing back to those three years and filling in gaps." However, she makes a point to mention that fans will first need to witness where Jane is three years later and where she's going next, before flashbacks are introduced because "the immediate pain of that loss would overwhelm our storytelling." OK, fair.

We only know three things for sure right now. Michael's really dead, this won't be the last time we see him, and no matter what happens, #TeamMichael will never perish.