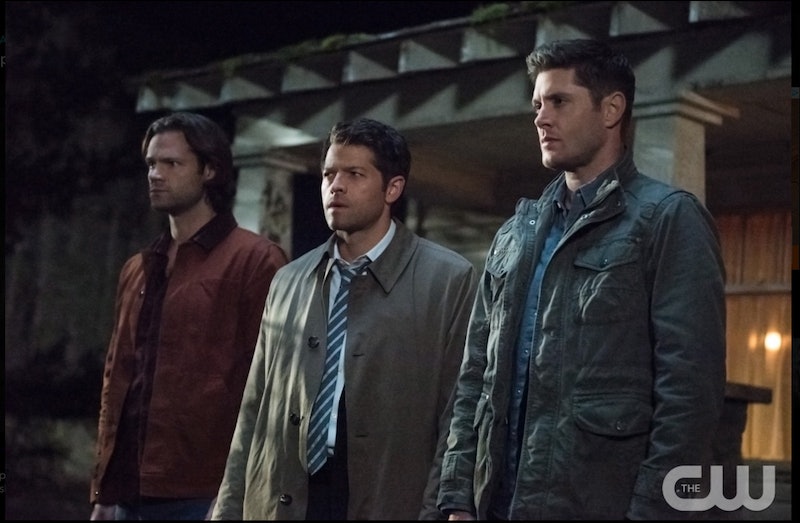 In a move that's lucky for fans but probably unlucky for the Winchesters, CW has renewed Supernatural for Season 13, according to Entertainment Weekly. Now that fans can rest easy knowing that their wayward sons will stick around, the next question is when will Supernatural Season 13 premiere?

The CW has yet to announce its official schedule for the 2017-2018 season, but having Supernatural on its roster comes as no surprise to a fandom who's been passionate from the start. Since the show's premiere on the WB, Supernatural has transitioned easily into the CW lineup, making it the longest-running show on the network. Judging by past premiere dates, Supernatural will probably be back in the fall.

And since it's such a trusty win for the network, Supernatural seems like it could go on forever. There's no logical end point in sight, since every week features Dean and Sam battling apocalyptic conditions, selling their souls, getting their souls back, or killing countless demons all in the name of the "family business." With Season 13 in the cards for the fall, how long will Supernatural last?

If fans were to ask the actors who play Dean and Sam themselves, they would get two completely different answers. In an interview with MovieWeb for the end of Season 11, Jared Padalecki said, "I think that'd be a nice way to go out if we had to — watching the end of the world. Or looking up at us from the trunk and throwing the weapons in and saying we've got work to do. All of those kind of leave room for opinion and room for interpretation. I don't think we should see the boys die or live, we should wonder."

In the same interview, his TV brother Jensen Ackles disagreed and said in response, "It's either going to end tragic or it's going to end not tragic, and I can kind of make an argument for both. I don't really know where it's going to go. I always thought Dean would make the ultimate sacrifice for his brother. I guess if I had to choose something, that's probably what I would choose."

Real-life best friends Ackles and Padalecki are an important part to Supernatural's longevity. Adding to their chemistry is the Winchesters' relationship with angel Castiel, played by Misha Collins. Originally brought on for three episodes, Collins managed to become an important part of the show's narrative arc. In an interview with ETOnline, Misha Collins said, "It was a gradual evolution for me. It wasn't just I went from guest star to series regular immediately."

The show has been on long enough to establish its own universe and rules, most of which have become Supernatural memes shared by fans. And those fans are a necessary component to keeping the Winchesters on the air. A Season 13 renewal is a cause for celebration...or pie.

More like this
The 'Dead To Me' Creator Says Her Series Finale Idea “Felt Very True To The Show”
By Brad Witter
Will 'The Walking Dead' Return For Season 12?
By Grace Wehniainen
How The Thanksgiving Episode Of 'Gossip Girl' Changed Pop Culture History
By Gabrielle Bondi
'Doctor Who's New Companion Has Been Winning Acting Awards Since She Was 18
By Shahed Ezaydi
Get Even More From Bustle — Sign Up For The Newsletter