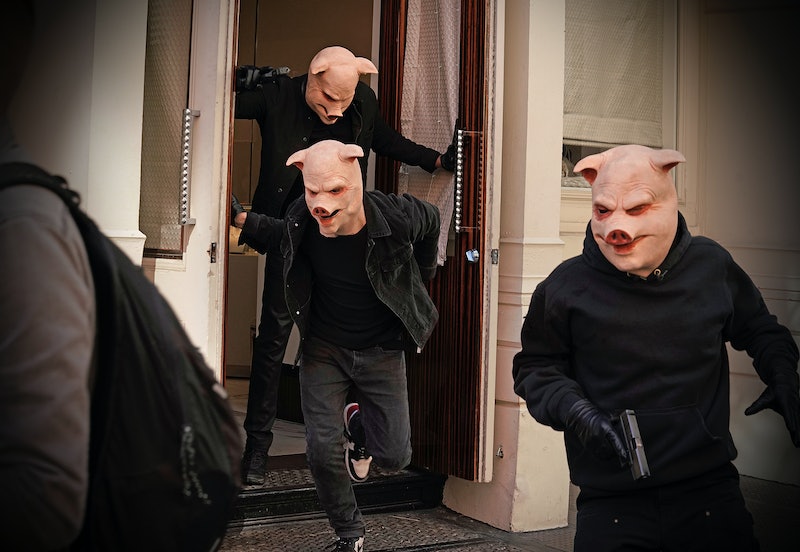 They'll huff, they'll puff, and they'll blow their way into a second season. The three little pigs, Little Red Riding Hood, Hansel and Gretel, and more than one Big Bad Wolf shared the screen this fall in CBS All Access' Tell Me A Story, a modern day mashup of familiar fairy tales. Coming from showrunner Kevin Williamson (Scream, The Vampire Diaries, The Following), the new streaming series contained more blood, sex, and murder than you were perhaps used to from the Brothers Grimm versions of these classic stories. But apparently subscribers couldn't get enough, since CBS officially renewed the show for another chapter. Now all we need to know is when Tell Me A Story Season 2 premieres.

Season 1 of the horror series debuted on Halloween, appropriately enough, and meshed together modern retellings of several popular fables into one sexy, violent thriller. Williamson brought together an all-star cast to act out these morality plays, including Paul Wesley (The Vampire Diaries) as one of a trio of pig-mask wearing bank robbers; James Wolk (Zoo) as the wronged man hunting them down; Billy Magnussen (Game Night) as a handsome predator; Kim Cattrall (Sex And The City) as his conquest's grandmother; and Dania Ramirez (Once Upon A Time) as one half of a pair of siblings straying down a dark and dangerous path.

So, will Season 2 pick up right where Season 1 left off? Will the Jan. 3 finale end in a bloody cliffhanger that will keep fans waiting hungrily for more? "The first season of Tell Me A Story turned conventional fairy tales on their heads, interweaving and modernizing three classic stories into a compelling thriller for today's audiences, in a way only Kevin Williamson can," said CBS All Access' vice president of content, Julie McNamara, in her official announcement of the show's renewal. "We can't wait to surprise and entertain viewers with a whole new set of tales next season."

Wait… a whole new set of tales? That's right; it sounds like CBS has set up its own anthology horror show to give audiences a different kind of fright every year. Indeed, the renewal announcement indicates that Season 2 of Tell Me A Story "will explore a whole new set of fairy tales and characters." Does that mean that Cattrall, Magnussen, Wolk, Wesley, and the rest won't be returning for the new batch of episodes? Depending on how bloody the finale gets, it seems likely that this cast will be moving on next year, and a new roster of victims — er, actors — will be joining the series to tell a new story.

But when will that new story hit screens? Those viewers addicted to Williamson's pulpy, seductive style will likely be jonesing for round two before long. Unfortunately, CBS hasn't yet announced an official return date for the series, but it's safe to assume that it will once again premiere in the fall, likely around Halloween. While streaming platforms like CBS All Access and Netflix do make it possible for studios to forgo the traditional one-season-per-year format upheld by broadcast networks for decades, that seems unlikely in this case. (Netflix's Chilling Adventures Of Sabrina will already be premiering its second season in April, only six months after the show's October debut.)

But while Netflix has dozens of original programs, millions of dollars, and years of experience under its belt, CBS All Access is still proving itself with new and new-ish shows like Star Trek: Discovery, The Good Fight, and Jordan Peele's upcoming reboot of The Twilight Zone. Netflix can afford to be a little more brazen than most of its competition, but All Access is likely to be more cautious and adhere to a more traditional schedule — at least for now.

Besides, Halloween is the perfect time of year for more horrifying fairy tales, don't you think?