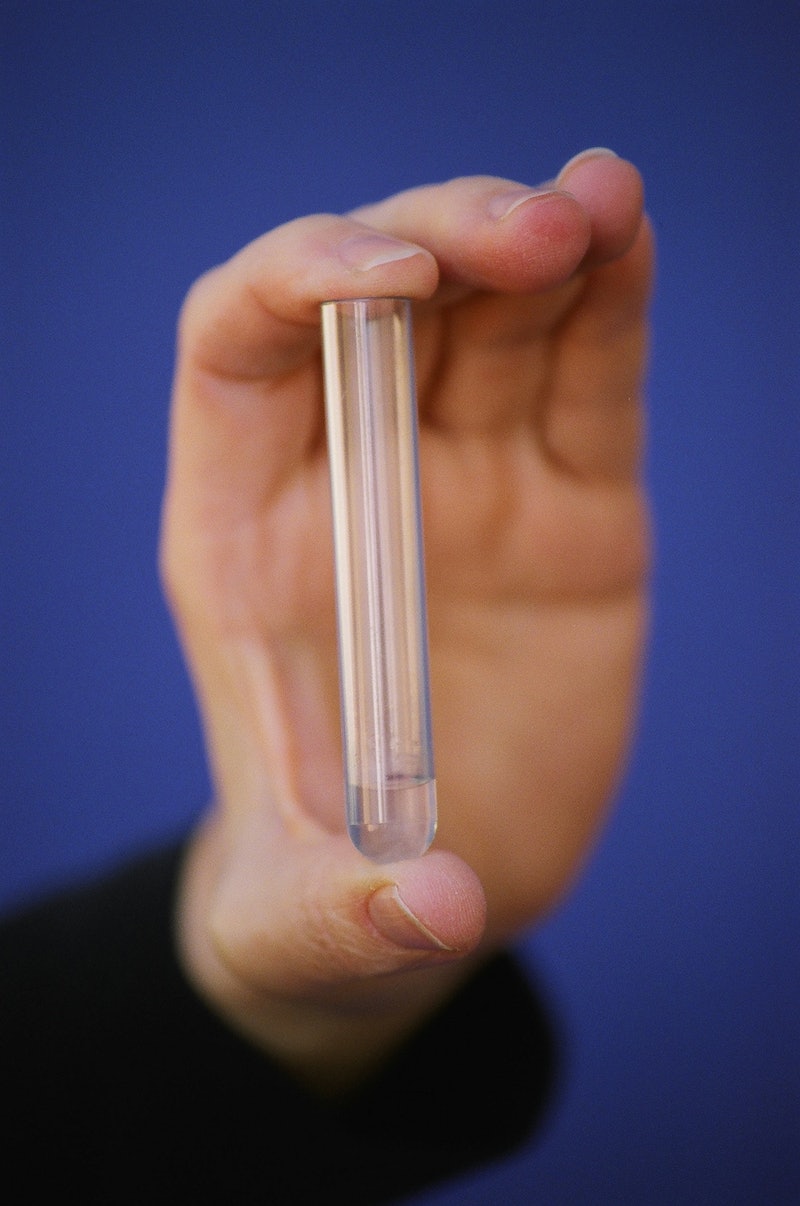 If you haven't already heard the exciting news, a new non-hormonal, long-acting form of male birth control may be closer than ever. In a study recently published in Basic and Clinical Andrology, potentially reversible male birth control Vasalgel, was found to be successful in preventing conception in groups of sexually mature rhesus monkeys for over one year, which is huge because vasectomies are generally more complicated for monkeys than humans. With the success they found, that only means good things for developers as they move closer to human clinical trials.

And now that it’s been proven to be effective in preventing contraception in monkeys, I'm sure many of you are probably wondering when will Vasalgel finally be available for actual human use?

"Patience is the name of the game when it comes to medical device development," Elaine Lissner, the founder and trustee of the Parsemus Foundation, the non-profit organization behind Vasalgel, tells Bustle.

"Vasalgel is revolutionary because men have no highly effective, long-acting but reversible way of controlling their own fertility."

Despite previous reports saying a new option for male birth control will be available in 2018, due to regulations that are continually shifting, Lissner, who's been working on the project for years, says they've stopped making optimistic predictions. If that doesn't sound too promising to you, don't worry. It's still happening, and most likely sooner rather than later.

"Vasalgel is revolutionary because men have no highly effective, long-acting but reversible way of controlling their own fertility," Lissner says. "Sometimes people perceive it as a war of the sexes, but it doesn't have to be that way. Women have birth control options now. If men have options too, you're really set."

If everything continues to go well, they're hoping to start clinical trials next year. This year, they're focusing on prepping for those trials by conducting final safety and stability studies. According to a news release, the first study will look into Vasalgel's effectiveness. It will then be followed by later studies which will attempt reversal by flushing the gel out to restore sperm flow. Until it's 100 percent certain that Vasalgel is reversible, Lissner says their first goal is to sell it as an "alternative to a vasectomy."

While Vasalgel won't realistically be out on the market by 2018, Lissner does see it being possible within the next three to five years. The good thing is, she point out, is that Vasalgel is a medical device, and not a drug, which would make the process even longer. But since it's not, she says Vasagel being available is definitely within sight at this point.

What You Can Do

In addition to difficult regulatory processes, another major hurdle preventing Vasalgel from being on the market sooner is funding. The farther along they get in process, the more expensive it gets. If you'd like to see this gamechanger in sexual health out there as soon as possible, you can show your support by making a donation to the Parsemus Foundation. Or you can even do something super simple like signing up for their newsletter and following their progress. According to Lissner, that's a good indicator of where interest is, so it helps them make a case to investors.

There may be delays and the occasional bump in the road, but Lissner says she's excited to get it out on the market since preclinical studies have shown it's effective. "It works like crazy," she says. When the time does come, the foundation's initial focus will be to start distribution in the U.S., E.U., and Canada and will expand from there. Even though we might have to be a little more patient for men to finally have their own form of long-acting birth control, it sounds like it may be worth the wait.