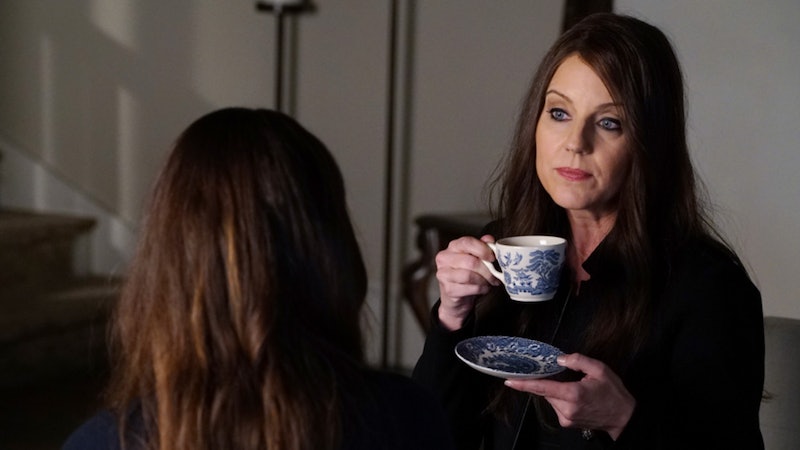 Eric McCandless/Freeform
By Lindsay Denninger
May 8, 2019

Pretty Little Liars fans know that a fate worse than prison (or possibly death) is to be locked up with Mona Vanderwaal. Mona can be nice, caring, intelligent, and all of that when she wants to be, but she's also cunning, manipulative, and vengeful. What Mona you get really depends on what you do to Mona, which is why Mary and Alex Drake's fate on Pretty Little Liars was so satisfying. But where are Mary and Alex Drake on PLL: The Perfectionists? Mona might be missing two of her toys.

A quick recap: Alex Drake is Spencer's twin sister and Mary Drake, Alison's mom's daughter. Yes, that makes Alex, Spencer, and Alison related. But Alex was AD was Uber A, who was the person who was making the Liars lives' a living hell on Pretty Little Liars. Instead of turning both Alex and Mary over to the authorities in the series finale, the Liars opted to take both women and hand them over to Mona, who kept them in a secret adult-sized dollhouse in Paris. Mona loves to play with her toys, especially the toys that ruined the adolescence of her and most of her friends.

Flash-forward to The Perfectionists, and where are Mary and Alex? One would assume that they're still in Paris, but Mona is in Oregon. Seems like Mona may have... misplaced them. “[Paris was] great for awhile,” Mona told Alison in The Perfectionist's premiere episode. “But eventually the reasons I was there … escaped me.” Uh-oh. And then, a few weeks later, Dana Booker, head of security at Beacon Heights University, asked Mona, "Do you worry that Alex and Mary Drake may try to find you?" Say what? The Perfectionists showrunner I. Marlene King told TVLine that it's a distinct possibility Alex and Mary could make an appearance. “It’s not something you’re going to see right away, but as we get to breathe a little bit more and slow down the story, I’d love to see that be its own standalone episode,” she said.

This means that Alex and Mary are on the loose, and since we know how resourceful they are, they could definitely pop back up in Oregon if they're looking for revenge on Mona and Ali. Mona likes to play it cool and tough, but her reaction to Dana's calling her out — deflecting to Dana's less-than-by-the-book past in the FBI — shows that Mona might be a little rattled by the idea that Alex and Mary could come find her.

Mona's internal life is a mystery to many, and King told Entertainment Tonight that she's looking forward to the audience getting to "know Mona better than we already do." She already might have a love interest on The Perfectionists (if you count that whole playing chess thing), and now, it might be nice to see Mona panic. Mona's panic will probably turn Mona into full-tilt madness revenge Mona, and if whoever is watching Mona, Alison, and the rest of the gang on The Perfectionists sees an Alex/Mary takedown, they'll certainly run for the hills when they know what Mona is capable of. Try her, Alex and Mary. Just try.