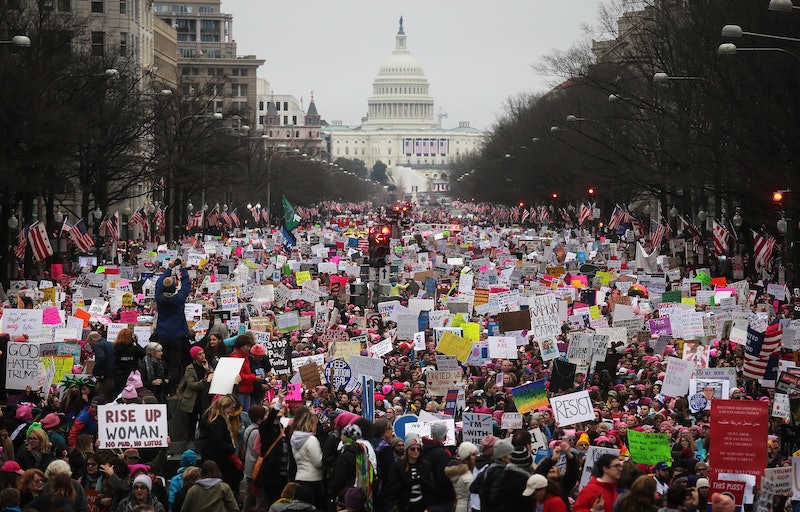 After the inauguration of Donald Trump as president of the United States, the resistance descended upon city streets across the country in the first, historic Women's March. The Jan. 21, 2017 event saw people gather to rattle streets in a collective chant. To relive this march, you might want to know where the Women's March 2018 Events will be. Because on Jan. 20 and Jan. 21, 2018, the Women's March will take to the streets again to peacefully, loudly, and forcefully combat voter suppression and inequality.

The theme of 2018's Women's March is "Power to the Polls," referencing the need to increase voter turnout at the midterm elections this November. The mission is to highlight to importance of registering to vote and actually voting on Election Day — even and especially for people running for offices outside of the White House. Electing more progressive politicians to office can hopefully leads to creating social change and taking down an oppressive system. Slip into your marching shoes, be they heels or booties or running sneakers or flip flops, and find a march to join near you. Thankfully, there are more than just the biggest metropolitan cities hosting events — you can find sister marches all over the country.

The Women's March is a global event. So, even if you're studying or living abroad, you might be able to find an event near you. Last year, according to the Washington Post, there were "at least 653 reported marches in the United States." And if those numbers impressed you, hold on to your seat for the next stat: The estimated number of people who turned up to protest in 2017, "involved between 3,267,134 and 5,246,670 people in the United States." That's just in the United States. Of course Los Angeles, New York, and Washington D.C. saw the biggest numbers, but the Post reports that states like Wyoming had multiple marches. You can join in on the action anywhere, really.

The map detailing where Women's March anniversary events are is lit up because, apparently and thankfully, we have a distributed population of woke people throughout the country. The Women's March Kickoff Event will be held in Las Vegas, Nevada, on Jan. 21. But other cities will also see marches hosted, and your hometown might be included.

New York City will see events on both Saturday and Sunday. Surrounding events will also be occurring in Long Island, New Jersey, Connecticut and Massachusetts. In fact, the entire Eastern Seaboard is dotted with marches. On the West Coast, Los Angeles will be hosting a Women's March event on Jan. 20. But the Women's March spans borders and is not only limited to US states and cities. Events will also be held in Mexico, Canada, Europe, Asia, South America, Africa, Australia, New Zealand and various Caribbean islands. For specific meet up points and event times in your surrounding area, you can easily enter your zip code into the Anniversary Event locator on powertothepolls.com. And, if you don't see one accessible to your town or city, you can organize your own sister march.

As stated on the Women's March official website, "we must create a society in which women — including Black women, Native women, poor women, immigrant women, disabled women, Muslim women, lesbian queer and trans women — are free and able to care for and nurture their families, however they are formed, in safe and healthy environments free from structural impediments." If that's not a reason to get out of the house on a Saturday and Sunday morning, I don't know what is. Thankfully, there is a global map of places you can go and be active and be heard when the Women's March anniversary events convene on Jan. 20 and Jan. 21 near you.