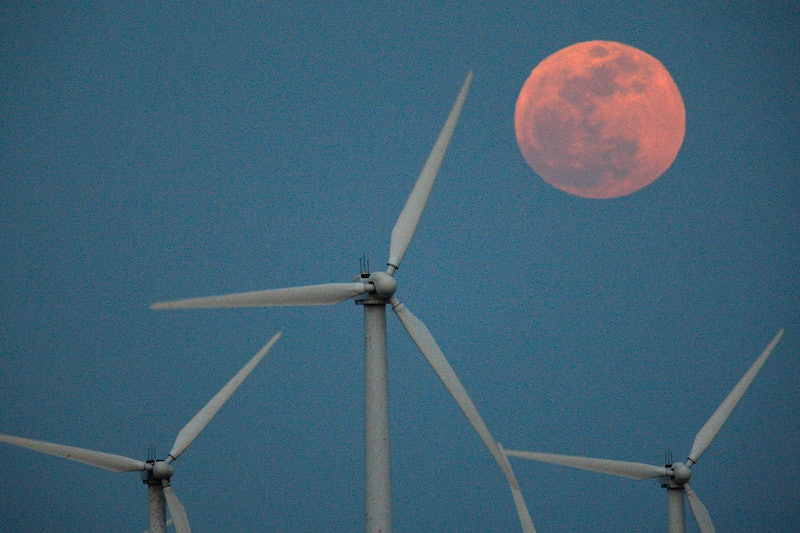 On Jan. 31, 2018, the night sky will be lit by a major lunar event. For the first time in over 150 years, Earth will play audience to something called a super blue blood moon. Hoping to catch a glimpse of this beauty? If so, the only question left to ask is where can you see the super blue blood moon?

First things first: What is a super blue blood moon? This once in a lifetime lunar event actually consists of three lunar events happening simultaneously: The first lunar happening to be aware of is the fact that this moon is a blue moon — though it's not actually blue. While that would be quite a sight, a full moon is actually dubbed a blue moon when it is the second full moon to occur within a single calendar month. The first full moon of January took place on Jan. 1, so now that another full moon is happening on Jan. 31, the latter is a blue moon. A blue moon itself is not very rare, as one generally occurs every two and a half years. However, more than one happening in the same year is more rare — and in 2018, we've got two, with the second happening on the night of Mar. 31. Talk about rare!

The "super" part of the super blue blood moon comes from the fact that there will also be a supermoon that night. According to astrologer Richard Nolle in The Sun, a supermoon can be described as a new or full moon taking place when the moon is at least 90 percent within its closest possible distance from Earth. In miles, this means that for a moon to be called a supermoon, it must be at a maximum of 226,000 miles away from Earth.

During the moon's approximate 28 day rotation around Earth, it follows an elliptical path. There are two sides to it's rotation: perigee and apogee. The perigee side brings the moon 30,000 miles closer to Earth than apogee. A supermoon occurs when the moon is in perigee, leading the full moon to appear about 14 percent brighter and seven percent larger, thus becoming a supermoon.

The final lunar event to make up the super blue blood moon is a total lunar eclipse — aka, the "blood" part of this trifecta. Don't know what causes a total lunar eclipse? This lunar event occurs when a full moon moves directly into the Earth's shadow, becoming completely engrossed in it. The Earth is between the moon and the sun for this in order to create the shadow. In order for the eclipse to be considered total, the entire moon must be in shadow. This totality can last anywhere from a few seconds to about an hour and a half, and due to the sun's reflection, the moon appears slightly reddish. Hence, it's a "Blood Moon."

Where Can You View The Super Blue Blood Moon?

If you live on the east coast, expect the eclipse to be far less visible as the moon won't be entering the Earth's shadow until about 5:51 a.m. EST. It isn't until 6:41 a.m. EST that the moon will really begin to enter total eclipse, turning "blood" colored. The moon sets in the east only a half-hour after that, though, so conditions are far from ideal.

This trifecta of lunar events is going to be quite something to view. Plan a last minute trip out west or hope for the best where you are. Either way, it's clear what people will be talking about at work on Feb. 1.