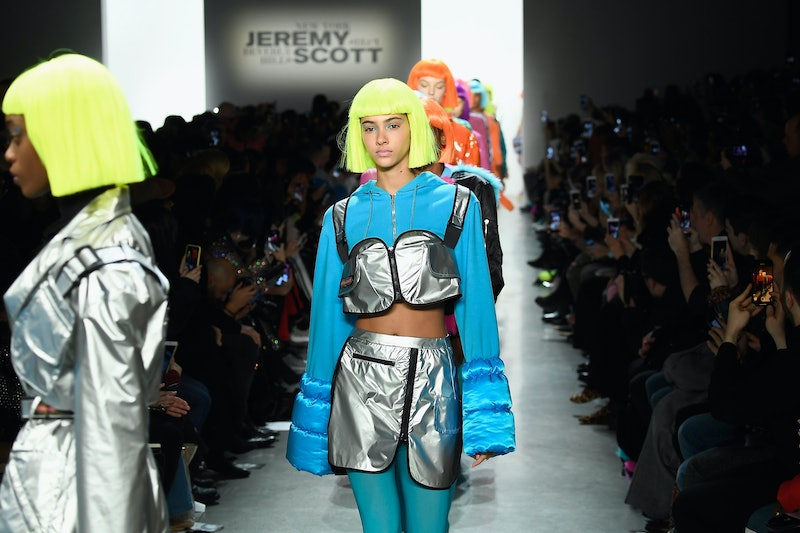 You might be wishing that all the snow would go away, but these boots will reignite your passion for winter fashion. As Cosmopolitan found, Jeremy Scott created thigh-high moon boots, and the Internet doesn't hate them. Some might say that it's an out of this world trend, but really it's just a sign that the 2000s are officially back.

When it comes to quirkiness, you can always count on Jeremy Scott. Between his own brand and Moschino,you can always count on something entertaining to walk the runway. His Jeremy Scott Winter/Fall '18 show delivered in the best way. Models walked the runway wearing short, neon-colored wigs, space-themed suits that Zenon would be jealous of, and thigh high moon boots. It was simultaneously a flashback to the 2000s and futuristic all at the same time.

Models, including Gigi Hadid wore a variety of different styles down the runway. Some of the boots were neon and furry while others were holographic, but all of them were statement pieces. Oddly enough, they actually looked pretty wearable.

It could be the model's matching futuristic suits or the fact that it brings back the nostalgia of Zenon, aka the coolest space girl to ever live. If nothing else, you will be able to brave the winter snow — no matter how many inches there are.

Unfortunately, these boots are not up for grabs just yet. All of Jeremy Scotts runway looks are sold online, but these have yet to hit the website. Scott's line is not exactly the most affordable though, so you'll want to start saving now, if you want to get your hands on the thigh-high boots.

This is just one of the early 2000s trends to make a comeback recently. The detachable pant trend is alive and well thanks to Opening Ceremony. The brand sells both versatile denim pants that turn into shorts and a jumpsuit that has detachable legs. It's a trend that was likely inspired by the cargo shorts that used to zip into capris and shorts that you wore in middle school.

The key to a throwback trend is taking an iconic item and making them modern again. Thigh high boots were a huge trend in 2017, and it looks like they're not going anywhere anytime soon. As Cosmopolitan points out, Uggs also had thigh high boots recently. This is the next big thing, my friends.

This was just one of the many quirky accessories of the show. Models walked down the runway wearing everything from metallic overalls, geometric-shaped sunglasses, and hats that had tails. It was bizarre to say this least, but that it what fashion is all about.

People don't hate the trend, either. Twitter users took to social media to talk about the thigh-high accessories, and no one seemed to have a problem with them. Scott knows how to make classic, everyday items into high fashion, so it's only a matter of time before you see people start to rock these in everyday life.

He didn't just do them. He DID them. Not just anyone could pull this off, but he somehow managed to do it.

Not only do people seem to like them, but they have already chosen their ideal colors. What a time to be alive.

But really, does it get any cooler than this?

He just did it and no one seems to be complaining. Go ahead and do your thing, Scott.

It didn't take long for people to jump on the thigh-high moon boot bandwagon.

If you were confused about what era would be big this year, I think Scott just let you know. Get ready for a whole lot of 2000s fashions in the upcoming year.