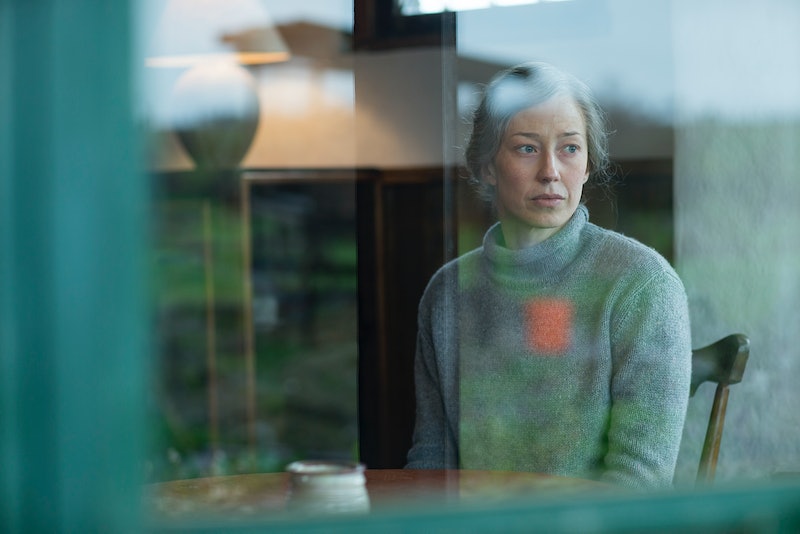 It's the question that co-creators Damon Lindelof and Tom Perrotta swore they'd never answer: Where did the Departed go on The Leftovers? Funnily enough, that's also the question that the Leftovers series finale answered, in a move that likely shocked every fan of the metaphysical HBO series. In a lengthy monologue in the final scene of the final episode, Nora Durst explains to Kevin Garvey that she did go through the LADR device, and that it took her to a world where 98 percent of the world's population had vanished seven years prior, while the remaining two percent lived in the ruins of civilization. In an interview with Bustle, co-creator Tom Perrotta addresses why the writers decide to answer the show's seemingly unanswerable question, and how literally viewers are supposed to take Nora's story.

The issue of where the Departed went has long been on the minds of the showrunners, according to Perrotta (who also wrote the 2011 novel on which the series is based). "The first time that I met Damon [Lindelof], he kind of got very conspiratorial with me and said, 'You know where they went, right?'" the author tells Bustle. "And I said, 'Well no, because to me the Departure is a symbol for everything we can't know, and our job as humans is to tell stories that will satisfactorily allow us to get through our lives despite the fact that we can't know.' And he said, 'Well, here's what I think happened,' and he then presented the idea that there was kind of a rupture in the world, and that in some alternate version of our world, there's a much more traditionally apocalyptic show where 98 percent of the world is gone and the two percent have to survive. And I said, 'That's a really cool idea, but let's never, ever use it.'

But Lindelof didn't let his pet theory go quite so easily. "Because he's always playing a very long game, he brought it up again at the beginning of this season," Perrotta remembers. "And it took a lot of serious discussion of, 'OK, if we do this, how do we do it?' And we came to the conclusion that it was much better to have [Nora] tell this story rather than to show it, and then put both Kevin and the viewer in the position of accepting or rejecting this story that they can't prove."

So, should viewers accept Nora's story, like Kevin chooses to? And if they should reject it, then why would Nora have been spinning such a massive deceit? "If Nora's lying, she's lying because she's embarrassed that she staked everything on this journey that she ultimately was unwilling to take," Perrotta explains. Although the viewer sees Nora in the device, as she's about to shout something out, they never get to hear what she says. "If you believe her story, then she could've been saying goodbye. But if you don't believe her story, then I think she was saying 'No' or 'Stop.'"

But ultimately, Perrotta has no hard answers about the veracity of Nora's story — which is very much in keeping with the themes of the series. "I think that is the sort of central question of the show: do you believe her story? In a sense, Kevin is put in the position of any person being presented with a religious narrative," Perrotta explains. "Are you going to have faith in this story? And the viewer is put in that same position. So The Leftovers has been a journey of faith, and it comes down to faith in what is essentially a supernatural narrative."

But how did a such a secular novel (which Perrotta himself described in a 2011 New York Times interview as depicting the "agnostic's apocalypse") become one of the defining television shows about faith? Perrotta credits that shift to his partnership with Lost's Lindelof — which sounds very much like a "man of science, man of faith" dichotomy, to borrow a phrase from Lindelof's previous show. "I was the voice of realism and he was the voice of fantasy/speculation/science-fiction/supernatural," the author says of his relationship with his co-creator.

"I think, because he's such a strong writer and he's so good at the storytelling language that he embraces — which is much larger than the storytelling language that I usually embrace — he pushed the show to places I didn't know it could go," Perrotta praises his fellow showrunner. "But even when I say the book is an 'agnostic's apocalypse,' I wasn't saying it rejected religion. In fact, the idea was that the ground had gotten cleared away; traditional religions couldn't explain the Departure, so now there was this big space where people who are a lot like us — rather than people who were living in the Mediterranean thousands of years ago — will have to come up with new stories to explain the awesome power in their lives that they don't understand and that they feel they're at the mercy of."

So, did The Leftovers end its three-season run with an hour that went full-blown science-fiction and finally explained the Sudden Departure? Or did it end with an hour that highlighted a woman who needed to tell herself a story in order to continue living, and a man who had the faith to believe her? "Nothing about The Leftovers would suggest that there's a definitive answer to the biggest questions," Perrotta says, ambiguous to the end.

Whichever way you land on the episode's central mystery, there's no denying there was something in the finale for everyone: people of science, people of faith… and people who exist somewhere in between.