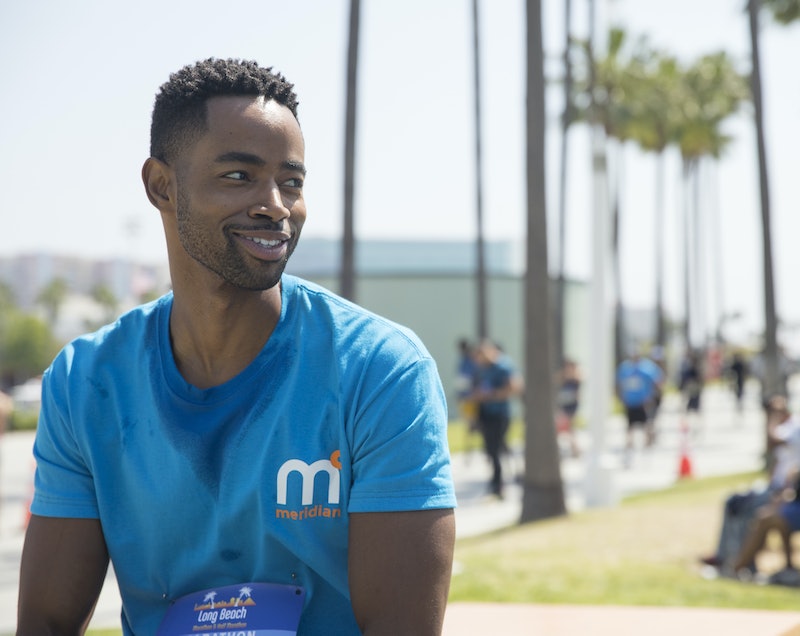 After she cheated on him in Season 1, Insecure Season 2 dealt with how Issa and Lawrence were handling their breakup. The finale left them in a relatively healthy place, but don't expect them to get back together. As previews show, Lawrence isn't in Insecure Season 3. And if you were crossing your fingers that Jay Ellis' character would miraculously still appear at some point, Vulture reported that Issa Rae confirmed that Lawrence won't be around when Season 3 premieres on Aug. 12. This news is certainly a blow to the LawrenceHive and casual Lawrence stans alike, but the show's creator and star said the decision is all about being true to Issa's journey.

The Season 2 finale of Insecure had Issa and Lawrence saying farewell to their Dunes apartment together. This moment gave them closure from their relationship, but it also could have been interpreted as an opening for them to one day reunite romantically. Before they said goodbye to one another, Issa imagined a future spent with Lawrence — marriage, kids, lots of hugs and kisses.

But in reality, the season ended with Lawrence simply extending a Facebook friendship after he had defriended her. And, as evidenced by Lawrence not being in Season 3, that act wasn't meant to be a sign of reconciliation. Instead, it was about both Issa and Lawrence being in a place where they could move on. Facebook friends, and nothing else.

For the Season 3 premiere, HBO hosted InsecureFest. At the July event, Rae told Vulture that Lawrence not being included in Season 3 was purely a story-based decision. "We want to stay as true to life as possible. They had a great conversation at the end of Season 2," Rae said. "You never see the exes again. And it's okay! You gotta explore life without Lawrence." Showrunner Prentice Penny also chimed in on the creative choice to leave Lawrence out. "We just said, 'Well, if he's not around, he's not around,'" Penny said. "Let's just deal with the reality of what her life is now. Let's be true to that, when you break up and you have closure."

But truth-based storytelling be damned because even though Insecure is Issa Dee's story at its core, some fans weren't satisfied with this response. As Rae discussed on the TODAY show with Hoda Kotb, a "Where's Lawrence" petition exists and it has more than 10,000 signatures demanding that the character return to the HBO show. Rae had already teased this passionate fanbase on Twitter and noted on TODAY how this petition not only goes against her creative vision for the show, but it won't really do any good since the season was already filmed.

The Cut outlined how Lawrence has a fierce set of fans that go by the name the LawrenceHive — riffing off of the BeyHive, of course. So it's understandable that they're disappointed that Lawrence's story won't continue on Insecure. And Lawrence himself has commented on his absence from this season. While it wasn't Ellis' decision to leave the show, he made light of the fact that he's missing this season. On Instagram, Ellis took the cast picture taken at InsecureFest and Photoshopped himself in. He captioned the photo, "Heard I missed something last weekend... fixed it."

There evidently aren't any hard feelings between Rae and Ellis though, as he stood by her side when she accepted the Peabody Award for Insecure in May 2018. And The Game actor is keeping busy with projects unrelated to Insecure. He's in the 2018 film In A Relationship with Emma Roberts and Michael Angarano and he appears in the upcoming movie A Boy. A Girl. A Dream. out on Sept. 14. He'll also be in the 2019 movie The Maze.

While Lawrence won't return Season 3, there's a possibility he could pop into Issa's life for a brief cameo in a later season. After all, this is something that has happened in female-led, relationship-focused HBO series before. Aidan was disrupting Carrie's life as late as Sex And The City 2 and although Christopher Abbot quit Girls after Season 2, Charlie returned for one last rendezvous with Marnie in Season 5.

Yet, as Rae has made clear, Lawrence coming back would only happen if it makes sense to Issa's story. And, as of Season 3, she has officially moved on from him. That may upset his fans, but this devotion to the true-life details is what makes Insecure feel so real. So if viewers are hurt that Lawrence isn't in Insecure anymore, use that pain to imagine how significant of a loss this is to Issa to help you understand her mindset in Season 3.