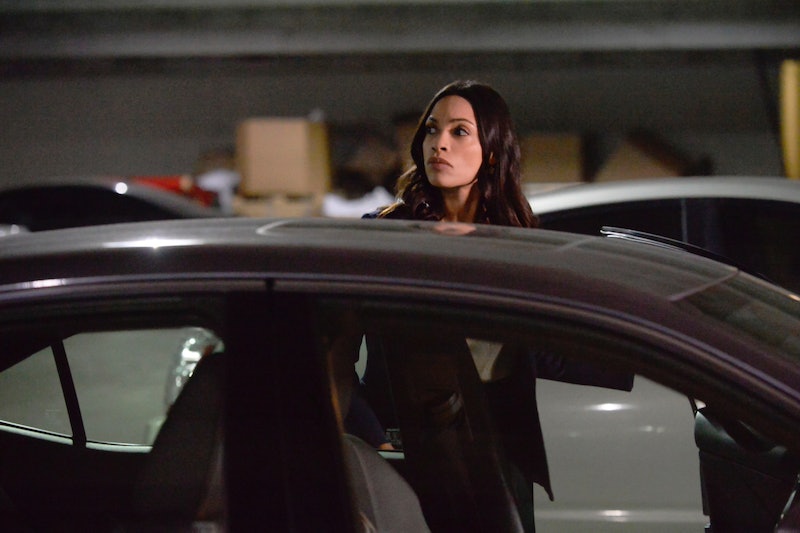 Spoilers for the Jane The Virgin Season 4 finale follow. Immediately before the major reveal that Michael could still be alive on Jane The Virgin, the Season 4 finale, Petra's real blackmailer attacks her and JR shoots them. But who does JR shoot on Jane The Virgin? Petra recognizes the person and may even be slightly upset that Jane Ramos shot them. And while there are a number of characters that can be ruled out, there are still plenty of people who would want to see Petra dead.

Right before JR saves Petra's life, she breaks up with her. Turns out, Petra really did kill her twin sister Anezka. Although it wasn't on purpose, Petra has been lying about it to everyone this whole time. JR even ruined her own law career in order to clear Petra's name in the belief that she was innocent. JR is understandably furious that Petra has deceived her and says she never wants to see her again. JR is on her way out of the Marbella when Krishna calls her from jail. She warns JR that someone is going to attack Petra. And it's a testament to JR's feelings for Petra that she acts on instinct and goes to save her very recent ex.

Krisha is in jail for saying that she blackmailed JR to try to pin Anezka's murder on Petra. But Krishna tells JR that the real blackmailer threatened her into saying that. As for who this blackmailer is, Petra says, "Oh my god. It's you" when she sees them. Petra also doesn't move or try to save herself when the blackmailer points the gun at her. Instead, it's JR who tackles the blackmailer and uses their own gun to shoot them.

Rose and Krishna can be ruled out since they both are currently imprisoned. And while Rafael and Jane wouldn't really be suspects, it definitely isn't either of them since they are busy at Rafael's apartment dealing with the idea that Michael may still be alive. One obvious suspect is Petra's mom, who is always causing her grief. But that seems too obvious. And even though Anezka is supposed to be dead, maybe the narrator lied and she had faked her death (yet again) and came back for Petra.

The Anezka theory is a stretch. But the Season 4 finale reminds viewers that people do come back from the dead on Jane The Virgin. Using that logic, another contender is Scott. Yet again, he's presumed dead. But if he somehow is still alive, he'd have an excellent motive since he loved Anezka and would want Petra to suffer for killing her.

Luisa is alive and doesn't like Petra very much. But she seemed at peace when Rafael saw her last. So unless Rose put her up to killing Petra, it would be surprising for Luisa to have turned homicidal. Petra's ex-boyfriend Chuck also probably has some ill feelings toward her, but he hasn't been relevant for a while. There's also Milos, Petra's kind-of husband. She had suspected him of the blackmail already, but would he ever be able to pull the trigger on Petra when he's always loved her so much? Plus, JR discovered that Milos is still in jail in "Chapter 76." In that episode, Petra also provided a very long list of suspects, including Pammy the Parrot.

The candidate that makes the most sense (if you ignore his alleged death) is Scott. In that case, Petra isn't actually upset that JR shot him — she's just traumatized. Fans won't get an answer until at least the Season 5 premiere, so the narrator provides the fandom with #JRShotWho?!. That hashtag will be the place for all fan theories until the blackmailer's true identity is revealed. Sadly, JR saving Petra's life may not save their relationship. JR is not only disbarred because of Petra, but now she's a killer too.