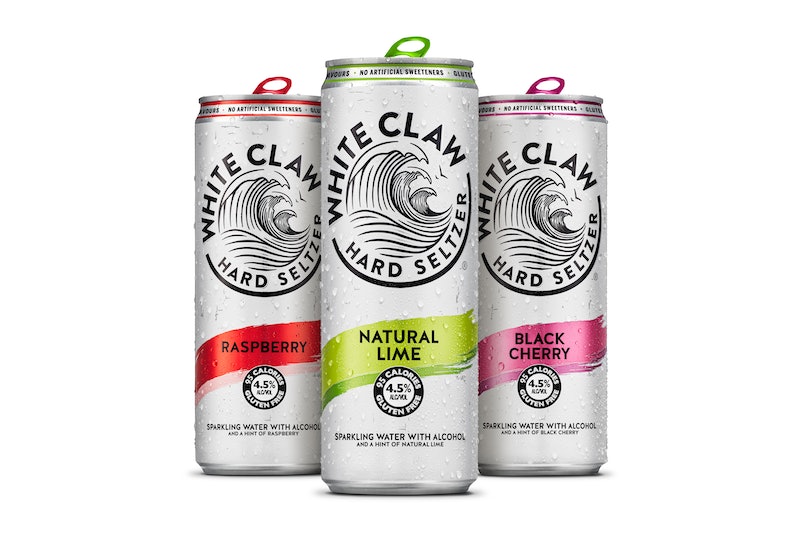 For those fond of a tipple, there's often a preference. You've got your beer vs wine crew, your spirits lovers, those who'll do anything for a Prosecco, and of course fans of alcopops. The only issue for those who enjoy the latter is that they can be a bit OTT sugary which, as we all know, can leave you feeling pretty rubbish the next day. Luckily, the clever clogs over at White Claw have had a think about how to make your fizzy booze situation slightly less sweet and news that White Claw Hard Seltzer is available in the UK from June 1 will be music to your ears.

It's time for a well-deserved victory lap for potentially the most millennial drink of all time: boozy fizzy water (also known as seltzer over in the U.S.). Who ever thought drinking sparkling water before a hangover would become a thing? This particular brand is making its way across the pond after establishing itself as a leader in the field of fizzy alcohol.

The drink is made using a mixture of sparkling water, a gluten free (thank god) alcohol base, and a tiny hint of natural fruit flavourings. It's 4.5% alcohol and only 95 calories, which is an interesting comparison to the 172 calories in an average 4% alcopop. The cans are 300ml, come in Lime, Black Cherry, and Raspberry flavours, and cost £2.50 each.

Launched back in 2016, the brand has proven an enormous success. As a matter of fact, according to figures from early 2020, sales of White Claw are up by 315%. It's so beloved that the Guardian reports that in summer 2019 it was sold out across the U.S. As a result of White Claw's success, companies such as Bud Light getting in on the hard Seltzer game.

Now the drink is launching in the UK just in time for a sweltering summer, and it's almost guaranteed that the White Claw lifestyle is going to sweep the nation like other much beloved crazes.

More like this
Pret & Costa’s Coffee Is The Strongest On The High Street, According To Which?
By Sam Ramsden
Ben & Jerry’s New Sundae Flavours Are A Chocoholic’s Dream
By Sophie McEvoy
Here’s What TikTok's "Mascara” Trend Is *Really* About
By El Hunt
90 Epic Truth Or Drink Questions To Play 'Say It Or Shot It' With
By Bustle UK
Get The Very Best Of Bustle/UK
Sign up for Bustle UK's twice-weekly newsletter, featuring the latest must-watch TV, moving personal stories, and expert advice on the hottest viral buys.