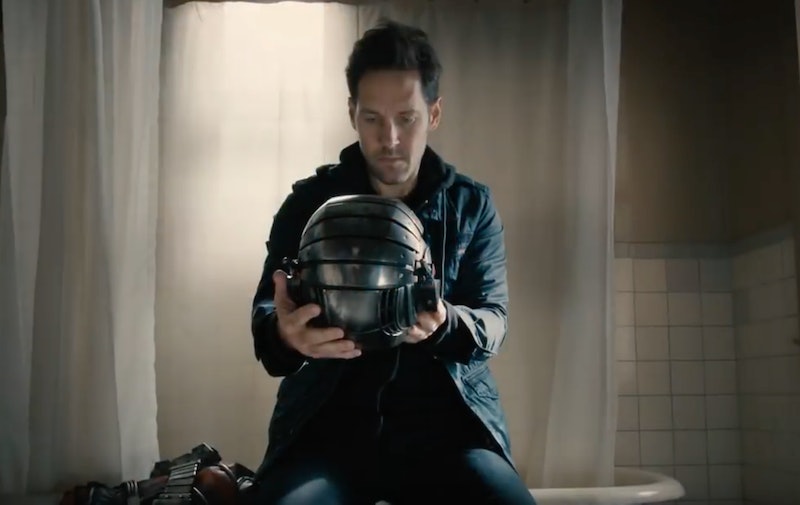 The next MCU movie hitting theaters is a perfect example of the saying "good things come in small packages." The movie, as you can probably guess, is Ant-Man 2, aka Ant-Man and the Wasp. The film follows both Ant-Man (Paul Rudd) and The Wasp (Evangeline Lilly), who can become insect-sized superheroes and pack a major punch. But if you're looking for where to stream Ant-Man before the sequel hits theaters on July 6, you sadly have limited options.

The 2015 movie is unfortunately not available on any subscription streaming services, although you can rent it for $4.99 on iTunes and for $3.99 on Amazon. You really should re-watch the first Ant-Man movie, not only to get another chance to experience Rudd's hilarious missteps but also to refresh your memory about the tiny superhero's beginnings. As important as Ant-Man's origin is important to the sequel, The Wasp, aka Hope Van Dyne, proves herself an even more important character to refresh your memory of, because she totally owns Ant-Man 2.

When you re-watch Ant-Man, you won't see Hope as a superhero, though. In the first of the Marvel movies, Hope simply appears as the estranged daughter of scientist Hank Pym (Michael Douglas). During Ant-Man, Hope indicates that she is ready to become a hero in her own right, but you don't necessarily see that transition in the first movie. Instead, you get to see Hope train Ant-Man rather than taking the superhero spotlight for herself.

That all changes in Ant-Man 2, though, when Hope finally gets to master her superhero alter-ego. When Bustle visited the set of Ant-Man 2 in Atlanta, Lilly revealed that she's happy the new film isn't an origin story for the Wasp, saying, "We all believed by the end of Ant-Man she’s ready to be a superhero, [so] there doesn't need to necessarily be that origin journey of why and how and learning the skills it requires to a superhero."

Lilly went on to explain that the Ant-Man sequel picks up when Hope has learned to master her skills after finally receiving the Wasp suit at the end of the first movie. "We make that leap of faith of saying you know she’s kickass. So let her just do that and be that, and then let’s explore some of the other emotional through lines of her life and her story," Lilly said.

It's true that Hope has proved that she's powerful even without her dad's high tech suit, and Ant-Man 2 will finally give everyone the chance to see her show off her many skills.

While the first Ant-Man offers some important context needed to fully appreciate Hope's new role as the Wasp, it's not the only past Marvel movie that you might want to re-watch before seeing Ant-Man and the Wasp in theaters. According to director Peyton Reed, the Ant-Man sequel references Captain America: Civil War often, because the new movie takes place right after the Sokovia Accords came into play.

As you'll remember from Civil War, Scott joined the Avengers — or half of them, at least — and ended up getting in major trouble for breaching the U.N.'s Sokovia Accords. Not only did he receive punishment for teaming up with the Avengers, but his actions also forced Hank and Hope to need to hide from the authorities.

As Ant-Man 2 Executive producer Stephen Broussard told reporters on set, "Someone knocked on [Hank and Hope's] door and was like, 'You've got to sign this contract because you’re currently in violation of this thing we put in place in Captain America: Civil War.'" Like Ant-Man 1, you can rent Civil War online from Amazon or iTunes. You'd better do you homework before Ant-Man and the Wasp comes out.