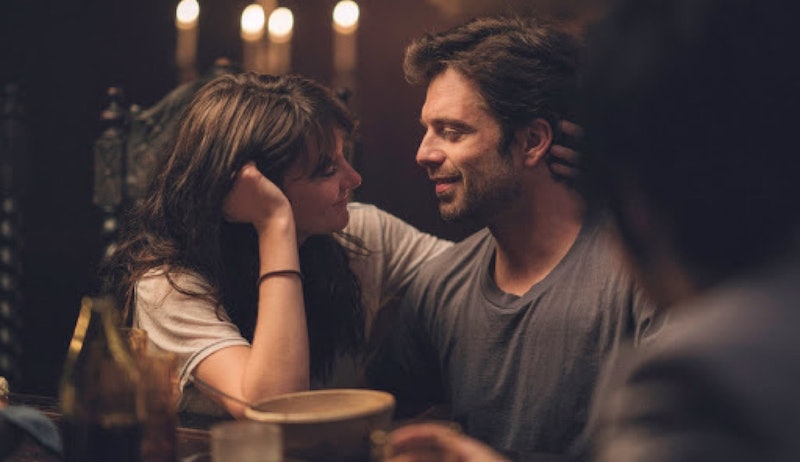 Director Drake Doremus is known for his romantic indie films. His acclaimed Like Crazy was the start of a string of sexy indies culminating in his latest work: Endings, Beginnings. It's a love triangle focused on a year in the life of conflicted thirty-something Daphne (Shailene Woodley), who's trying to get it together while falling for two men simultaneously. Set to hit theaters May 1, Endings, Beginnings had its theatrical release cancelled in the wake of the novel coronavirus. But fear not: here's where to stream Endings, Beginnings to get your hazy romance fix.

The film stars Woodley as a woman who quits her job and long-term relationship with no real goal but to escape herself. Living in her sister's pool house trying to figure things out, she ends up attending a party where she meets straight-laced intellectual Jack (50 Shades of Grey's Jamie Dornan) and charming raconteur Frank (Captain America: The Winter Soldier's Sebastian Stan). Despite swearing off men and booze for six months to sort out her life, Daphne falls for both men. She only realizes they're close friends after getting physically involved .

Instead of waiting for theaters to reopen, the film's distributor, Samuel Goldwyn Films, chose to release the movie digitally on April 17. Endings, Beginnings is currently purchasable on iTunes and Fandango for $12.99 and will be available on VOD on May 1. Director Doremus also announced on Twitter the film would slowly roll out on multiple digital platforms, and eventually hit HBO, adding , "I hope the film brings you a sense of peace, love, reflection and calm in these difficult times."

Endings Beginnings is a heavily improvised film. Instead of a full script, Doremus loosely outlined it, with the actors filling in the rest.

That makes what could seem like a common premise — a woman falls for two "best friends" who seem to have little in common — feel highly relatable. Speaking to Bustle, Doremus said that was intentional. "I guess you could describe it as a triangle, but it’s far messier than that...Things just don’t end really cleanly and perfectly, and [you don't] take the perfect amount of time before the next thing begins in your life. Things overlap, and things are weird, and things are messy, and things are not black and white."

More like this
What's New On Netflix: A Third '365 Days' Movie & Lili Reinhart’s New Film
By Arya Roshanian
Revisit 1992’s 'A League Of Their Own Cast' Photos After The New TV Series
By Grace Wehniainen
Gassed Up Promises All Things Action, Risk, & Redemption
By Frances Stewart
What’s New On Netflix: 'Never Have I Ever' & 'Indian Matchmaking' Return
By Arya Roshanian
Get Even More From Bustle — Sign Up For The Newsletter