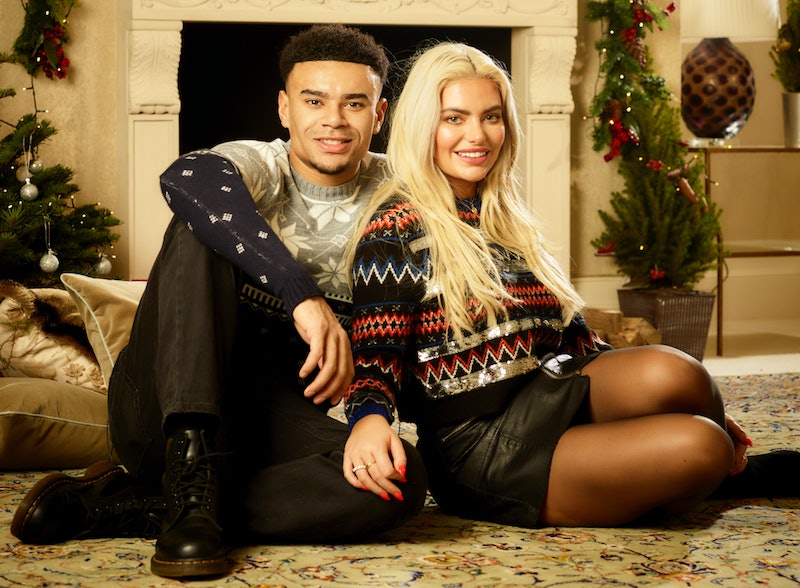 Love Island may have been absent from our screens for months but the drama just hasn't stopped. There have been break-ups and reunions and plenty of cheating accusations. Now, most of the cast are coming together once again for a one-off episode that is set to be more explosive than the entire summer series put together. But where is the Love Island Christmas reunion filmed?

Well, I can confirm that you definitely won't be seeing the islanders in their swimwear. The Spanish villa has been replaced by a traditional country mansion. According to the Daily Mail, the huge manor house is located on the outskirts of London. Bustle reached out to ITV for comment about the exact location, though the newspaper reports that the location — which includes an indoor swimming pool — was being "kept top secret." The paper also reports that filming took place over the course of two days.

Plenty of your favourite contestants agreed to take part alongside host Caroline Flack. Winners Jack Fincham and Dani Dyer will obviously be centre stage thanks to their recent split drama. Earlier this month, Dani posted a heartfelt message on Instagram, announcing that she and Jack had split. The nation was shaken but it turns out everyone's worries were for nothing as the couple appear to be back together.

Last week, Dani posted a photo of the pair together, writing: "Just want to put all comments to bed. All I can say is I’m still 22 trying to get my s**t together and grow into a woman but doing it in the public eye is sometimes hard and scary. But arguments are arguments and I love him. I can only please people who want to be pleased and I am having to learn that opinions are just opinions. Hope everyone can understand that I am just a normal girl."

The other couples that have stayed strong since the summer are Wes Nelson and Megan Barton-Hanson, Adam Collard and Zara McDermott, and Josh Denzel and Kaz Crossley. Unfortunately, Kaz will be appearing solo in the reunion episode as Josh was busy working in America at the time of filming.

Several couples who have experienced dramatic splits will be facing each other for the first time. Laura Anderson and Paul Knops, Ellie Brown and Charlie Brake, and Georgia Steel and Sam Bird will be having some rather awkward conversations. Recently released clips from the show prove that some of those talks go down just as well as expected.

It's unclear if they declined the invitation from the show's bosses or simply weren't invited in the first place. Niall, who left the show after nine days due to struggling with Asperger's, appears to fall into the latter category. He captioned a recent Instagram post with: "The postman is really having my pants down, first of all my acceptance letter to Hogwarts didn't come and now my invite to the Christmas reunion."

New Jack, as he will forever be known, has also been stirring the pot by retweeting messages from fans who are annoyed that he won't be starring in the reunion episode. Bustle reached out to Jack's representative to find out why he is missing from the line-up, and was told: "They did contact us and we did try and work around Jack's commitments, however they had more than enough Islanders to participate."

Love Island: The Christmas Reunion airs on ITV2 on December 17 at 9 p.m.