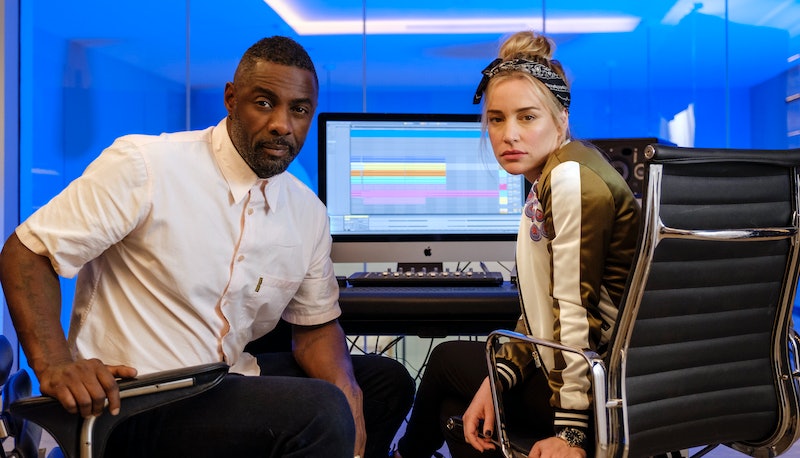 The brand new Netflix comedy Turn Up Charlie debuts on the streaming platform this week, and stars Luther actor Idris Elba as Charlie — a struggling DJ and bachelor, who in a last chance bid for success winds up agreeing to work as a male nanny to his famous best friend's daughter, Gabby. The eight-episode series will see appearances from Waterloo Road actor Angela Griffin, and the "Fill Me In" singer Craig David. But where was Turn Up Charlie filmed?

It appears that due to the plot of the series, various filming locations were used throughout the making of Turn Up Charlie, and according to Deadline, initial production began at home in the UK. When speaking at a press event in London, Griffin, who appears in the series, revealed that much of the filming also took place in Ibiza. As reported by the Irish Independent, she said "There was a lot of partying. It was all about DJing and the party scene so we could call it research. We were filming out in Ibiza. Then (Elba) would be DJing on the Sunday night at a real gig, so we’d all go to that."

The 42 year-old actor then stated her desire for a second series of the Netflix original. She added: "The dream job, with the dream guy. Please, fingers crossed for season two."

As previously reported, the comedy follows the life of eternal bachelor and failing DJ, Charlie. After being asked by his famous best friend for a favour, Charlie believes he may finally have made it in life. However, his hopes are dashed when he discovers that the favour is to be a 'manny' for his friend's troublesome daughter, Gabby. According to the Radio Times, actress Frankie Hervey portrays the character of Gabby, and other Turn Up Charlie cast members include Piper Perabo, JJ Feild, Guz Khan, Jocelyn Jee Esein, Jade Anouka, Cameron King, and Dustin Demi-Burns.

In addition to enjoying the partying element of filming, actress Griffin also praised Netflix for investing in what she describes as a "diverse comedy." According to the Irish Independent, she said "It’s a diverse comedy. You look around and it’s really hard for comedy at the moment. A lot of the terrestrial channels have put it quite low down on their order list. The comedies they do have are brilliant but as a brown girl I’m looking for those diverse roles."

Turn Up Charlie was co-created by Elba and television producer Gary Reich, reports Variety, both of whom also work as executive producers of the show. This marks the second comedy series created by the Luther star, who previously worked on the Sky One series In the Long Run — which told the story of an immigrant living with his family in London, and was loosely based on Elba's own life.

Unlike his character in the Netflix comedy, Elba himself has enjoyed quite the successful DJ career, and has performed at festivals including Glastonbury, Creamfields, and is scheduled to take the stage at Coachella 2019. Impressive.

Turn Up Charlie is available to stream on Netflix on Friday, March 15.