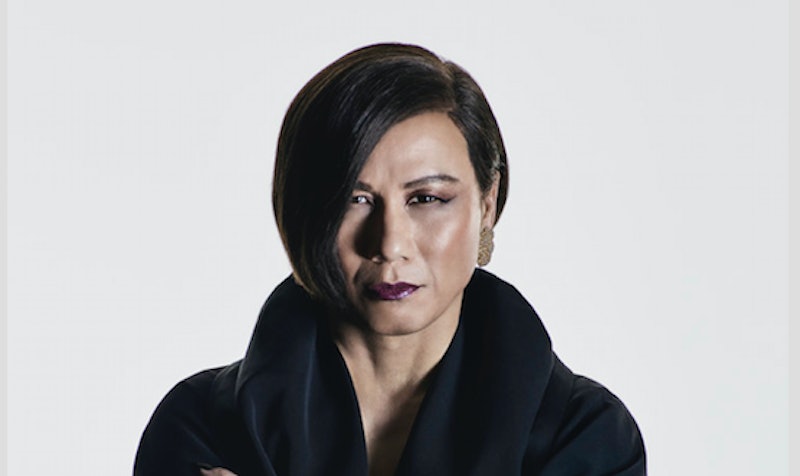 Spoilers ahead for Episode 3 of Mr. Robot Season 4. Viewers likely started Mr. Robot's Oct. 20 episode hoping for answers about who "the other one" is, but as far as consolations go, finally learning Whiterose's backstory isn't a bad alternative — particularly since it may reveal how Elliot can defeat her. When the show opens, Zhi Zhang (a perfectly cast Ross Kurt Le) is brokering a deal with IBM in 1982. Zhang's English-language translator (Eugene Shaw) facilitates the deal, but their relationship is more personal than professional. It's during this deal in America that Zhang reveals that she identifies as a woman to her love — and her translator accepts Whiterose for who she is.

Once back in China, the translator's father tries to force him to marry another woman. Shaw's character (whose name is never revealed) has been hoping that Whiterose will become the next ambassador to the U.S., so that they can be their true selves in America. But Whiterose reveals that she has taken the position of Minister of State Security in Beijing because it will give her "greater influence and more authority." Shaw's character is devastated because he's sick of hiding who he loves and China is a country "that says who [they] are is forbidden." Whiterose promises that she'll "find a way to make this world better, for us." But the translator proclaims, "This world will never be good enough," and dies by suicide in front of her.

Back in the present, Whiterose tells her assistant Wang Shu what outift she will wear "the day my project is shipped — the day we begin to build a new world." It's the same dress she wore when she came out as transgender to the translator back in 1982; clearly, his influence still weighs heavily on her even all these decades later.

At the same time, Whiterose continues to be consumed with getting her machine shipped to the Congo. Considering her backstory, she was most likely inspired to build her mystery project because of the translator's death. She continues to claim it will create a better world — exactly what she promised him all those years ago. In fact, her end goal may even be to bring him back. After all, she did lead Angela to believe the machine could bring back her mom; maybe there was some truth to that.

The flashback also shows that Whiterose wasn't always so fascinated with time, and that this was instead a characteristic of her lover that she's since taken on. Even the quiz questions that the translator asked Whiterose when they were happily in love are something that she's seemingly adapted. They're similar to the questions Angela was asked during the Land of Ecodelia game before meeting Whiterose in Season 2. The translator had asked, "The first color that pops to mind?" to which Whiterose replied, "Purple." Angela was asked, "Are you red or purple?" and she appropriately replied, "Purple." Suffice it to say, the translator seems to have heavily influenced whatever Whiterose is doing now.

By the end of the episode, it's clear she still has the upper hand when it comes to Elliot, Tyrell, and Price. However, this relationship is a vulnerability for Whiterose. If Elliot learns about her past, he may use it to exploit her — and stop whatever she's planning with her machine.