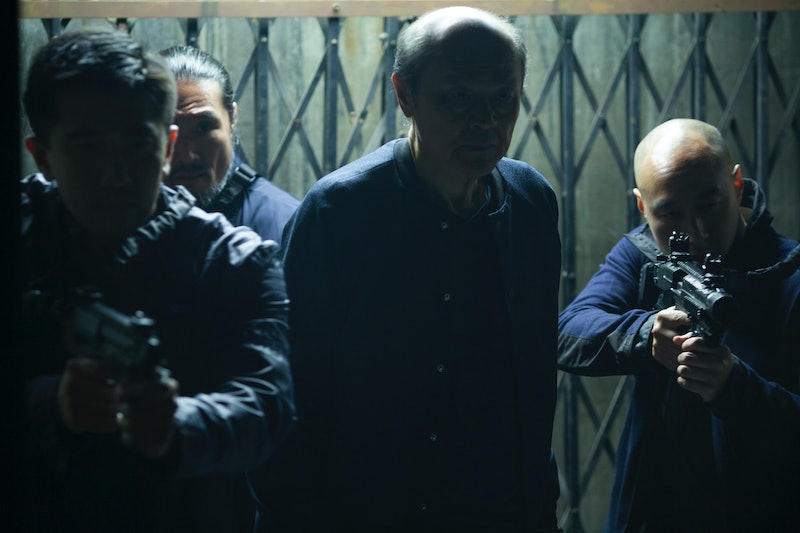 Iron Fist Season 2 finds Danny Rand still in the wake of Matt Murdock's (presumed) death, trying to keep the city safe in his absence. That means getting involved with various old and new faces in New York City. Who are Sherry and Hai-Qing Yang on Iron Fist? Chinatown is undergoing a shift in leadership. Spoilers for Iron Fist Season 2 ahead.

In the Defenders, Marvel's street level heroes vanquished the Hand from New York City once and for all. In Iron Fist Season 2, it seems, that has created a power vacuum for organized crime in Chinatown with different gangs scrambling to take control. This is where the Yangs come in.

Hai-Qing Yang has appeared before in both Iron Fist and Luke Cage. His organization, called Yangsi Gonshi or The Yang Clan Company or, more casually, the Hatchets, went up against the Hand in Season 1. So he and Danny are kind of, begrudgingly, allies of sorts. Towards the end of Luke Cage Season 2, he joins a meeting held by Mariah Dillard (Stokes) in hopes to create a criminal alliance throughout New York. It seems as it was partially his idea as well.

That said, after a negotiation gone wrong, Hai-Qing is killed by Davos and his wife Sherry Yang is in charge now. Played by Christine Toy Johnson, she has her own ideas about how to keep New York safe, and she asks Colleen and Danny to help and protect her.

Sherry Yang is not a character in Marvel comics, but she's a good one to have in this universe. Not only is it good to see more female crime bosses, it's nice that Sherry is never really a villain. Luke Cage also found himself working alongside the types of criminals he usually fought against, but the situation that Danny and Colleen have with the Yangs is different.

At the end of the season, the gang war in Chinatown is over and Sherry remains on good terms with Colleen and Danny. Colleen asks her to go legit with her organization. Do business instead of crime. Help the community. "I want what you want," Sherry says, "but neither of us are so naive as to think that can happen over night." She doesn't want Danny and Colleen interfering, either. So they decide on a balance.

Does Mrs. Yang know about the Stokes alliance that her husband was instrumental in bringing about? Will she follow in his footsteps, even though both Hai-Qing and Mariah are now dead? Hopefully Sherry Yang will return, because her character is too interesting to lose this quickly.

The Marvel Netflix world got smaller with The Defenders, and it could easily happen again if the criminal bosses unite against those who seek to defend the city. Rosalie Carbone, another lady boss in this alliance introduced in Luke Cage, it set to appear in Daredevil Season 3. At least Sherry Yang has some kind of trust and respect for her friendly neighborhood vigilantes. She doesn't see them to be a threat that needs to be eliminated — not yet, anyway.